The grand old Magnum Leisure Centre in Irvine is being pulled down as I type. Local politics and whatnot has seen the building fall gradually into disrepair, an eyesore too far gone for a quick cash injection and 60 minute makeover. They’ve opened a spanking new place in the town centre. It’s impressive ‘n all that, but like for like, it doesn’t come close to what the Magnum offered. 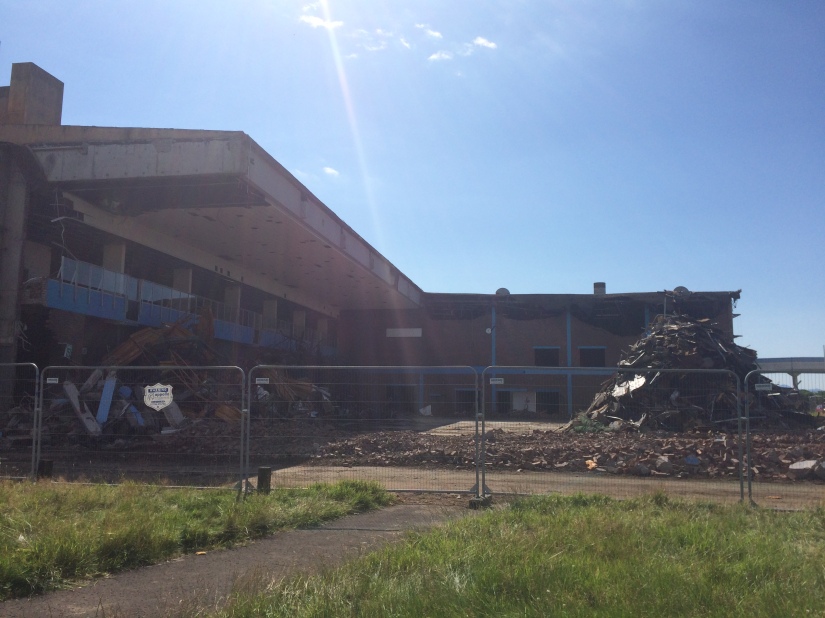 A fixture on Irvine beach since 1976, the Magnum played a formative part in most Irvinites’ growing up. Beyond Irvine, it was known as the place where you were bussed on a school trip; to swim, to skate, to watch the latest blockbuster in its plush 300-seater theatre. If you were that awkward age between being too old to stay in on a weekend night but too young for the pub, the Magnum was your saviour. There’s no-one I know who didn’t go there. Even oor ain Nicola Sturgeon mentioned it on her Desert Island Discs, recalling Frosty’s Ice Disco skating sessions with a misty-eyed fondness.

The Magnum had something for everyone. The Scottish Indoor Bowls championships were held there. Every pedigree dog in the country was shown there at some point. Girls and boys danced at regional shows. Gymnasts tumbled and twirled and twisted their way around the main hall. 80s fitness freaks squashed while the half-hearted badmintoned. All manner of variety shows were held there and crucially, all manner of big, proper, touring bands poured through the doors as quickly as they could be accomodated.

Irvine in the 1980s was a popular place for all your favourite bands to play; The Clash, The Jam, Big Country, Thin Lizzy, Chuck Berry, The Smiths, The Wonderstuff, Madness….. the list is endless, thanks in no small part to the efforts of Willie Freckleton, the local Entertainments Officer who offered up what was at the time the largest indoor concert hall in Europe to the promoters and band managers who deigned which towns were important enough to play. Willie offered the hall rent free, which proved to be the clinching factor most of the time. Amazingly, most of the bands would include Glasgow and Irvine as part of the same tour, something that, since the building of the Hydro on Glasgow’s Clydeside is now unthinkable.

I believe this was the first time Bigmouth was played live.

There are a multitude of stories connected to the Magnum, from local folk who were so familiar with the warren of corridors and passageways in the changing areas that they could sneak from the ice disco into the UB40 gig without paying, or the young fans who found themselves receiving mohawks from Clash roadie Kosmo Vinyl after they’d played a terrific London Calling-era ‘Greatest Hits’ gig, not that The Clash ‘did’ greatest hits, but you know what I mean.

I remember the day The Jam came to town. Too young for the show (I didn’t even know it was on) I happened to be at the front of my house as scooter after scooter after scooter buzzed past on their way from Glasgow to the Magnum. A multitude of mirrors, parkas and girls riding pillion, it was just about the most impressive thing I’d seen at that point in my life, something only equalled when I saw The Clash in Irvine Mall on the day of their Magnum show. Four alien-looking guys in denim and leather and black shades, surrounded by a scrum of older folk I recognised from the years above at school. “It’s The Fucking Clash!!!” is what I remember hearing, even if I was unaware exactly who The Fucking Clash were at that point in my life. 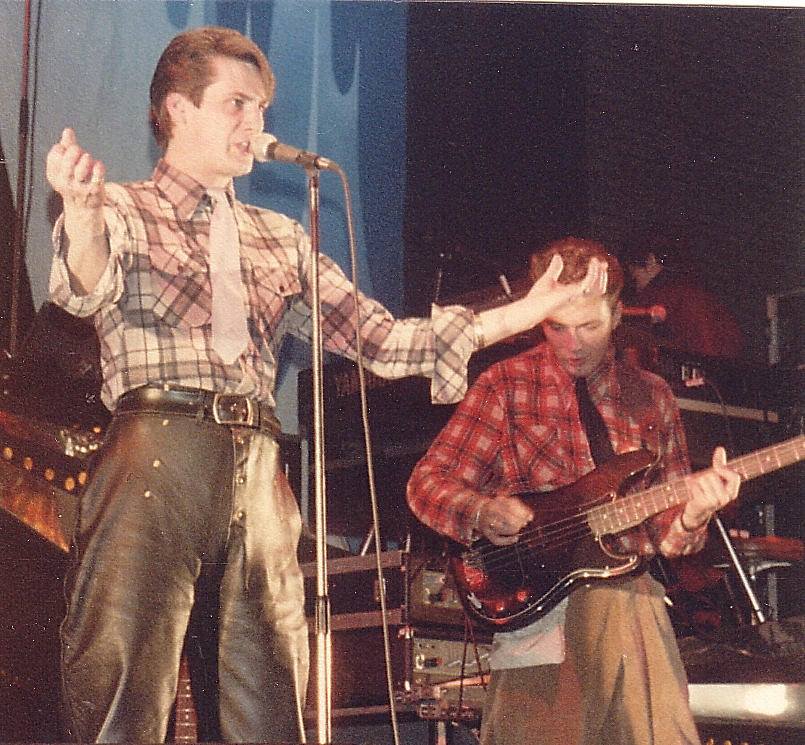 Thrillingly, Ross has snapped loads of bands at the Magnum.

Sadly, this is all he could find!

Willie Feckleton once told me a great story about booking Chuck Berry, his idol and the musician he was most thrilled at having landed to play in Irvine. Chuck, a musical giant who was right there alongside Ike Turner at the birth of rock ‘n roll, a man who is responsible for fashioning the DNA of the rock guitar riff was, by all accounts a thoroughly unpleasant human being. In Irvine he wouldn’t play until he’d first been handed his fee (paid in American dollars, of course) in a brown paper bag in the dressing room before going on stage.

“The anonymous support band was also Chuck’s backing group and when Chuck eventually came on he played on about only six songs. He let the other guitarist take most of the solos, looked super-bored throughout and disappeared offstage fairly quickly.”

Coming off after the set Willie approached Chuck enthusiastically. “That was great Chuck! They love you out there! How about an encore?“

“Sure,” drawled Chuck with his hands out. “Fo’ anutha’ five hun’red dollas…“

There was no encore.

It’s stories like those above that live long after the artist has left town and the gig is nothing more than a pre-smartphone blur of exaggerations and half-truths. Did Morrissey really dance with Brian McCourt’s umbrella when The Smiths played? Did Phil Lynott really nip up to George the Barber at the Cross for a quick trim of the ‘fro, mid tour with Thin Lizzy? Who can be certain if they did or didn’t? For cultural and economical terms, it’s a real shame that Irvine no longer has a venue that can be used to entice the big acts of the day to come and play and create memories for our young (and not so young) folk. 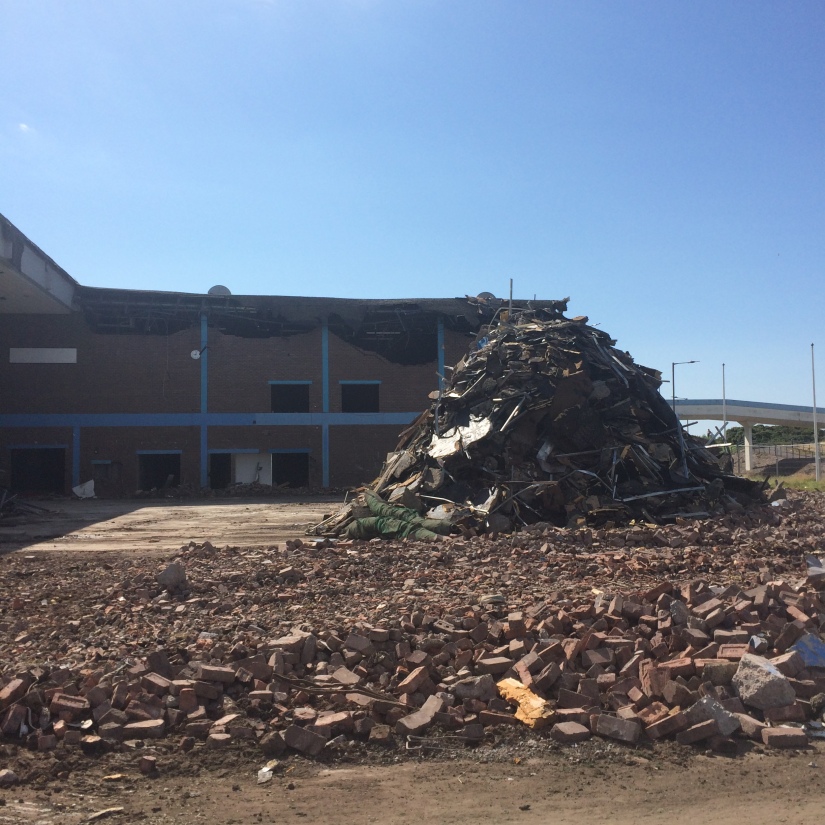