Fuck. Just heard the news. This keyboard is awash with tiny tears as I type. It’s always the way, but why do the good guys go first? I can’t believe I’m writing about Alex Chilton in the past tense. His music, especially with Big Star, means as much to me as Them There Beatles, it really does. Whether he was bedroom balladeering or bar-room bawling and balls-out rocking, his songs hit a nerve that jangled all the way to the auditory part of my brain like one of those fancy pants chords he could tease out of his guitar.

If you’re reading this you probably know all about him. Teenage Box Top. Cult hero in coulda been shoulda been Big Star. Producer of The Cramps. Friend and collaborator with fellow enthusiasts/obsessives Teenage Fanclub. All round nice guy, he wrote and recorded some of the best pop songs you’ll hear. Seek out #1 Record or Radio City or 3rd/Sister Lovers for proof. Sometimes bleak, often uplifting, always soulful. But you knew that already. Given our track record for celebrating the artist in death rather than life, Alex Chilton may yet become somewhat ironically a Big Star.

I’m glad I caught Big Star live. Just the once, when they first played Glasgow as part of their initial reunion tour. I stood on the balcony of the QM Union looking down onto the stage where Chilton led his band through non-hit after non-hit after non-hit. The crowd knew every word. So too did Ken Stringfellow and Jon Auer of The Posies, similarly Teenage Fanclub-like in their obsessiveness about Big Star, and on-stage playing out their own version of Jim’ll Fix It on bass and guitar. Chilton himself played a mean guitar that night. And I mean mean in the economic sense. No frills, no pedals. Just him, a nice warm valve amp and a couple of vintage guitars. What a sound! Often overlooked in the scheme of things, Chilton was a fantastic guitar player – proof? – His version of My Baby Just Cares For Me is still up for grabs via this post.

He could play anything. Anything. Rock. Pop. Stax-inflected southern soul. Doo-wop. Jazz. E-nee-thing. He was a player’s player. A dude. And he once, sorry twice, played the 13th Note in Glasgow with Teenage Fanclub as his backing band. Naturally I found out about this the day after the second show. It was a Tuesday morning and a colleague from work casually mentioned it on the phone. Pre internet days, I’m afraid. Pissed off? You better believe it. Especially as the bootleg sounds amazing. Here‘s the entire show. No artwork. No tracklisting (I’m far too lazy/far too busy to type it out). First track is a rockin’ September Gurls. There’s covers of T-Rex, 60s pop standards and, yep, Stax-inflected southern soul. Get it and remember him this way.

Thanks for the music Alex. 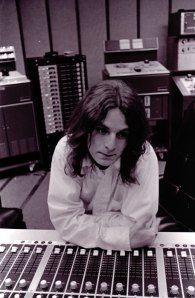