Back in 1989 I wrote a letter to The Wedding Present wishing them luck with their new major label contract. They’d just signed to RCA and lots of folk like the NME and my pals thought they’d sold out. I was helping collate a fanzine on the local music scene (which was very healthy at the time) and in the letter I asked if any of the Wedding Present could give any of us new bands some advice. 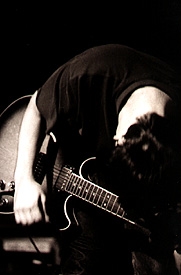 David Gedge wrote me a nice letter back, thanking me for my kind words and he invited me down to Leeds to interview the band in their favourite pub. I was only about 18 at the time and this was easily the best thing that had ever happened to me. It was like ‘Jim’ll Fix It’ and Christmas Day all at once. In February my Dad drove me to Leeds (I know, I know…) and dropped me off at the Red Lion pub (I think it was) I walked in and immediatley saw Pete the guitarist playing the fruit machine. Pete would later form The Ukranians but in those days he was known as Grapper, lead guitarist with The Wedding Present. He introduced me to David Gedge and a pal of his, and for the next couple of hours we talked about music, football and the usual sort of stuff while my wee dictaphone recorded the whole thing for posterity. Pete told me about the band’s first ever gig in a hall in Allerton Bywater (apologies for the spelling?) outside of Leeds. Years later I was travelling to York on the train and I went past Allerton Bywater. True that. David told me that he’d spent his part of the band’s advance from RCA on a Ford Orion. A red one. Can you imagine having this sort of conversation with any other band? Maybe Teenage Fanclub. Being English they all wanted to know what I thought of the Poll Tax (being tried out in Scotland at the time) but I was more interested in finding out what kind of guitars, amps and effects pedals the Wedding Present used to get their sound.

I was surprised to find out they were massive hip-hop fans. Gedge loved Public Enemy more than Sonic Youth. Naively I assumed that if you played in a guitar band you’d only like guitar music. I now know differently but I was a bit wet behind the ears back then. They were funny, kind and exactly the sort of people who you’d want to be friends with, and for a while I kind of was – David Gedge sent me a postcard from Germany when the band were on tour, the same week that the NME ran a big feature on the same tour. For the next few years, at the start of a new tour David would write to me and let me know that I was on their guest list when they were in Glasgow. Being 18/19,  I took all of this a bit for granted. In hindsight I realise that not everyone got this sort of treatment from their favourite bands. David Gedge made a big impression on me and I vowed that when I got famous I’d be as nice to my fans as he had been to me.

Well. I’m still not famous, but I like being nice to you. In 1992, The Wedding Present came up with the brilliant idea of releasing a single per month. With fan based sales and a good promotional campaign from their major label, they’d be guaranteed a hit single every month and a place in the Guiness Book of Records. Each single was released on 7″. I have them all apart from the first one cos Our Price didn’t get any in. The idiots. Every A-side was a one-off original song and every B-side was a cover. Here below are 3 of the covers.

I could have gone for any of the 12 covers really. There’s a cracking version of the Go-Between’s ‘Cattle & Kane’ on the first single. They do a gnarly version of The Monkees ‘Pleasant Valley Sundae’. And their version of Elton John’s ‘Step Into Christmas’ will be posted very soon with my forthcoming Christmas Compilation post. Until then, here’s 3 excellent covers:

The nicest pop star I know

My Tweets
Join 1,038 other followers