Murmur by R.E.M. may well have been called Mumble. Or Mutter. Or just plain Mmmmmm. The young Michael Stipe, all doe eyes ‘n demi-wave was so self-aware of his voice, so self-conscious of his lyrics that he spent most of that first album being foggy, obfuscating and willfully obtuse in his delivery. Quite mmwhat he szings ommn trackszzz sssuch as Pilgrimage or 9-9 or Moral Kiosk is amnyone’szz mmm ggguess. That’s changed somewhat since the advent of the internet, but where’s the fun in that, kiddo? The mid ’80s was an anything-might-be-right approach to lyric learning, phoentics often replacing the actual words and I’m not even sure I want to know the real words nowadays anyway. 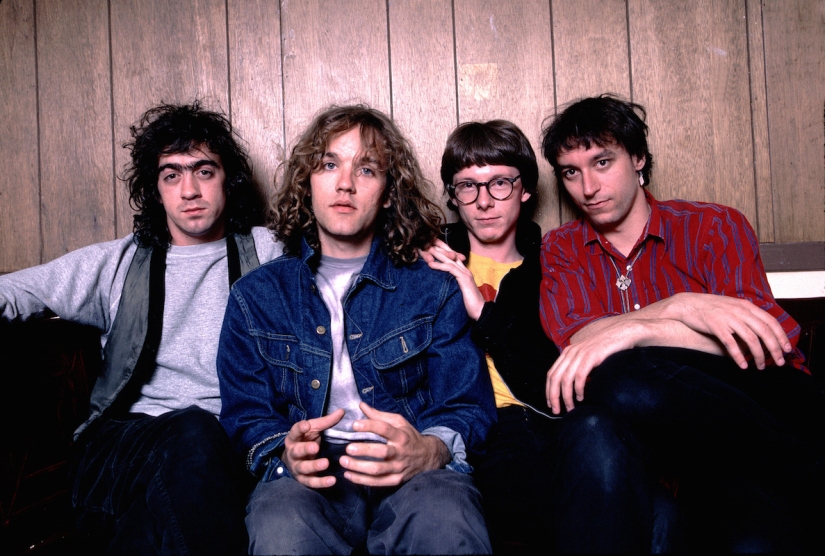 Behind the singer, the band stir up a heady swell of classic alternative American rock, as timeless as Tom Petty’s punkish jangle, as melodic as a Wilson brothers’ full-fat harmony, yet as scuffed at the knees as a dustbowl drifter. The instruments are easily identifiable. There’s no muddy mixing here – it’s all about the angle of the jangle.

Peter Buck arpeggiates away on his open-chorded Rickenbacker, all puffy sleeves ‘n waistcoat ‘n suspended 4ths until the end of time. Bill Berry holds the beat, occassionally popping up with a stone cold classic (Perfect Circle), contributing far more to proceedings than his mere title of ‘drummer’ might suggest.

Understated star though is Mike Mills, his solidly twanging Rickenbacker bass driving the songs with a toughness that’s offset by Buck’s clattering jangle. Mills also chimes in with falsettoed harmonies –  just like those Wilson brothers’ hamrnonies mentioned beforehand – adding colour and commerciality to the band’s sound.

I never saw R.E.M. live until ’89, so I can’t be sure, but I imagine Catapult might’ve been quite the rocker at those early shows. On Murmur, it’s stretched as tight ‘n taut as the skin on a tom, the verses straightjacket-slim before it bursts in a glissando of glassy up and down the neck chords and Stipe-provided backing vocals. Catapult! Ca-ta-pult. It’s the sort of chorus that I imagine the band might’ve played over and over in rehearsals, grinning as they play, admiring the chord sequence, the vocals, the drive, the way it all fits… it’s one of my favourite early R.E.M. tracks.

A few years back, IRS released a warts ‘n all set of outtakes from the R.E.M. vaults; live stuff, demos, alternate versions and the likes – ideal for folks like you and I who love that phase of the band more than the mandolins ‘n stadiums years. There’s a terrific live version of Catapult to be found. Internet research shows it’s likely to be a recording from Seattle in 1984 – peak early R.E.M. in other words. As I suggested above, it is indeed quite the rocker.

The keen-eared among you might spot a second voice; grizzly, gruff, grainy. I believe that’s the drummer, once again proving his worth to one of America’s greatest alt. bands. If you haven’t played Murmur in a while or, gasp, ever, rectify that today. It still stands up as one of the band’s best.