It’s early 1985. The plans for Live Aid haven’t yet been hatched but Band Aid is still very much in the collective conscience of a nation which has rallied round to raise actual millions for ‘the starving children in Africa’ ((c) everyone’s mum, dad, gran and auntie at the time.) Doing their bit, the 2nd Irvine BBs are having a ‘Bring and Buy’ sale and, doing my bit, I hand over a pile of 7″ singles (“I no longer listen to them,” I rationalise, with alarming short-sightedness. “If I can help raise some money, I’m being a good citizen.”) Yes, maybe, but a foolish idiot to boot. Even as I give them away – Baggy Trousers, Stand & Deliver, Ally’s Tartan Army, Ghost Town, amongst half a dozen others – an internal voice is telling me not to be so bold, but before I can start a proper argument with myself, a smiling Mr Davey has taken them from me and placed them next to the pile of Topical Times football annuals, Commando books and Warlord and Victor comics. I have donated a little part of my life and I will never see them again.

I wonder what happened to them? It’s a thought that, believe it or not, creeps into my mind at least once a week. The world is collapsing around us in all sorts of unthinkable ways but what concerns me most is whether or not some happy-go-lucky browser at the bring ‘n buy stall still has my records. I’m assuming with hope that they were all bought at premium, African children-saving prices rather than binned at the end of the Bring and Buy sale, and that whoever bought them bought the entire lot rather than cherry-pick the good stuff. It was all good stuff! Surely the lucky buyer recognised that?

I wonder too, do they ever wonder who the initials ‘CMcA’ belong to? My early teenage mark was penned carefully on the lip of all my 7″ sleeves, on the back at the top, just where the record slides in, just as I’d noticed my dad’s were. Whenever I browse through old records in a charity shop (and it’s been a wee while) I half expect to turn up a copy of one or more of my errant singles. The chest thumping that accompanies the uncovering of an Ant Music or a dog-eared Dog Eat Dog is louder than the Burundi drums that first brought those records galloping into my life, but, so far, no luck. It’s becoming a nagging obsession, truth be told.

The long register of names that appear cursive and carefully printed on the labels and liners and back covers and bottom corners on many of the records in my own collection are a mystery. Who are they? Or who, perhaps, were they? Where did T. Heywood, with his one-time love of obscure Singaporian beat groups live? When did Graham choose to give all his Kinks 7″ singles to charity? Why did Brenda Clack choose to give her well-played mono copy of Help! to the British Heart Foundation shop? How did RP Baker’s mono Sgt Peppers sleeve (yes!!) end up with a stereo copy (och!) of the record inside it?

I suppose one person’s old clutter is another person’s golden treasure. And treasure hunters like us live for those moments when you happen to be in the right Cancer Research shop at the right time, when a back-breaking flick through the endless James Last and Super Stereo Sound Samplers returns an unexpected John Martyn record (aye!), or Talking Heads (aye, aye!!), or even a sleeveless Faces album. £1? Don’t mind if I do, thanks.

What journey did those records have before ending up with me? Were they, like those Two Tone and Adam & the Ants records of my own, bought with pocket money and brought home as fast as the purchasers’ legs could carry them? Were they played over and over until someone – a parent or an elder sibling, perhaps – demanded they be turned down or, “better still, off”? Did they soundtrack getting ready on a Saturday night? Did they blast at teenage parties? Or were they played once then filed embarrassingly away, unliked and unloved, before facing the indignity of being given to the charity shop along with all the other useless ephemera of life? We’ll never ever know. Well-worn, in some cases, hardly-played in others, these slices of black plastic – ‘pre-loved’, to use current parlance – are once again enjoying a new lease of life in my own record collection.

If you listen really carefully while they spin in thunderous mono and crackling stereo, their grooves breathe little sighs of joy. 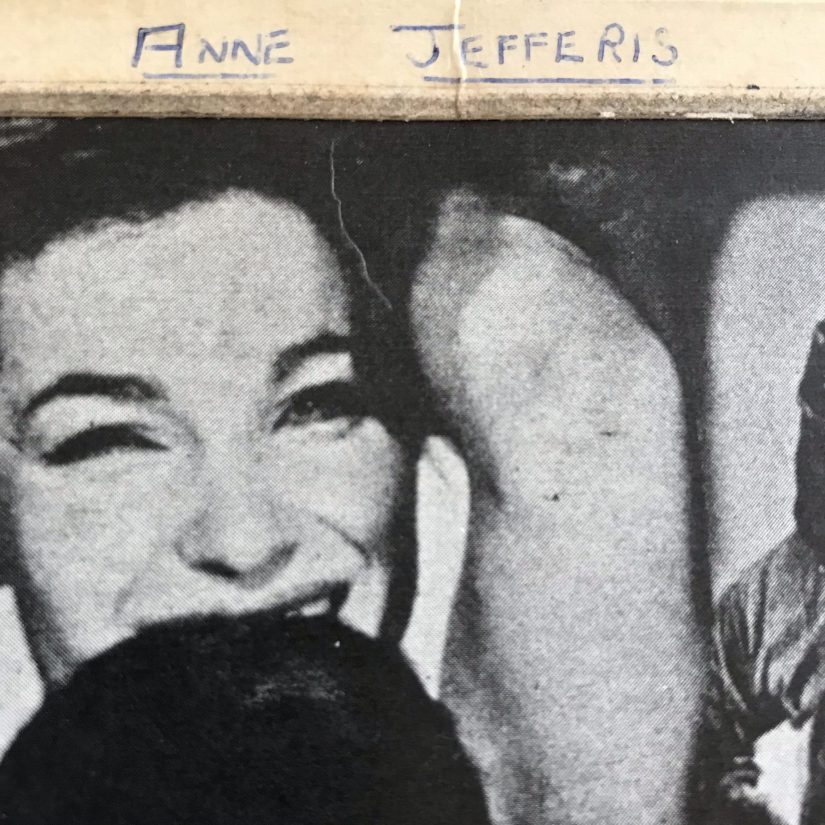 Anne Jefferis may have chosen to biro a love heart around one of the pictures of Paul McCartney on the gatefold sleeve of Beatles For Sale, but then, she also enhanced the inner sleeve with stapled and sellotaped cut-out images of the Fab Four from Teen Beat or Beatles Monthly or whichever pop magazine of the era was her preferred reading material. Yellowing, crackling and flaky, the tape still holds in place most of the cut outs that were stuck there 56 years ago. 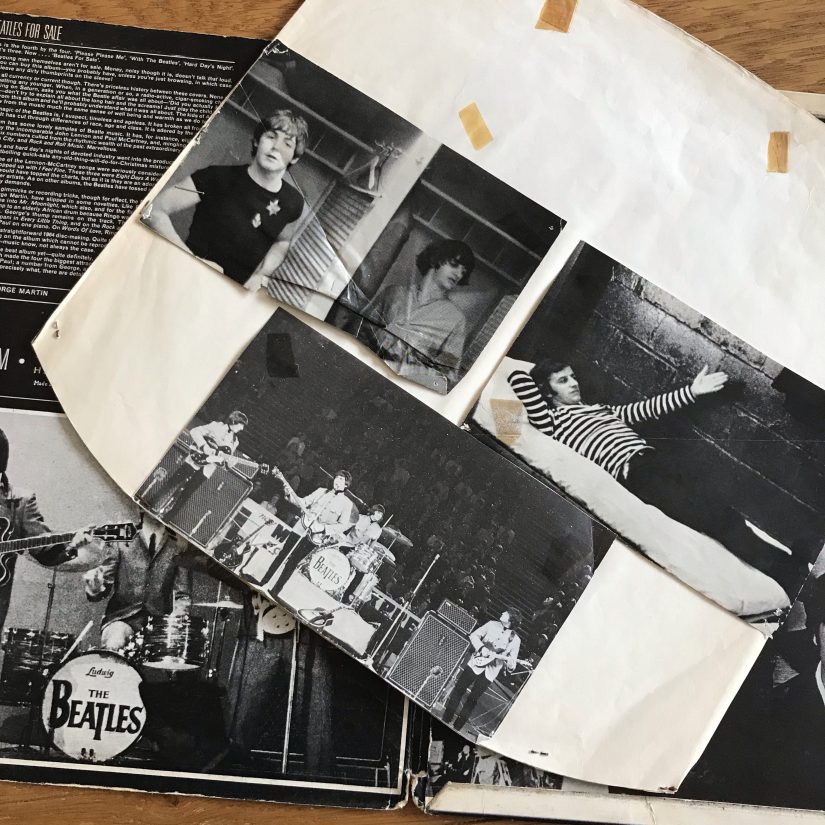 The Beatles – Rock And Roll Music

Whenever I play the record, as I was doing earlier this morning, I like to think of Anne, wrapped up in McCartney (and, clearly, a wee bit of Ringo too), obsessing over the harmonies and chords and total fabness of the songs that fly off the the record with total giddy joy.

Did Anne Jefferis simply tire of The Beatles? Surely not! John Lennon’s sandpapered ‘n leathered larynx on that downhill-without-the-brakes-on gambol through Chuck Berry is enough to keep The Beatles close to anyone’s heart for evermore. Did Anne perhaps pass away, her well-loved records thrown out with the other unwanted remnants of her life? (What other records did she have?!?) We’ll very likely never know.

The music…and the people who first owned them – Anne, RP, Brenda, Hugo and the many others…all live on with every subsequent play. I hope those records of mine are still spinning somewhere too. They bloody well better be.