I met Charlie Burchill once. Tiny and comically round, he looked like a pantomime pirate who was missing his beard; the tight black jeans, pointy boots and dazzling white blousy shirt that probably cost more than my monthly mortgage repayment brought to mind Captain Pugwash on shore leave. While my 5ft 8″ towered over him I was instantly enlightened as to why that white Gretsch Falcon he was fond of playing in those Simple Minds videos always looked ridiculously over-sized on him.

I’m being a wee bit cruel though; Charlie was very smiley, extremely chatty and, in the same way that he and Jim Kerr had moments earlier been gushing over the Roxy and Bowie 7″s that filled the Wurlitzer we happened to be leaning against, he listened enthusiastically to my stories of how Simple Minds had played a major part in my formative years.

I came to Simple Minds around the time of Glittering Prize and Promised You A Miracle – the New Gold Dream album is an incredibly-produced LP – stick it on at some point and lose yourself in the textures – and while it was Don’t You Forget About Me that brought them to the attention of my mum and the rest of the world, it was I Travel that melted my mind to the possibilities of music.

By the time I’d first heard I Travel, the band had just played Live Aid and were chronologically closer to Belfast Child, Mandela Day, Biko and the posturing, political pap that disenfranchised an entire generation of fans who’d been by the band’s side since the days of the Mars Bar in Glasgow, the knowing Chelsea Girl single and the Empires And Dance album. The New Gold Dream album though had me scampering backwards to see what else the band had done, and it was on a scratched copy of Empires And Dance from Irvine library that I first encountered I Travel. Listening to it as I type, I’m still waiting on a skip that doesn’t happen. Europe has a lang….oblem. It’s funny how music lodges in your head like that, eh? 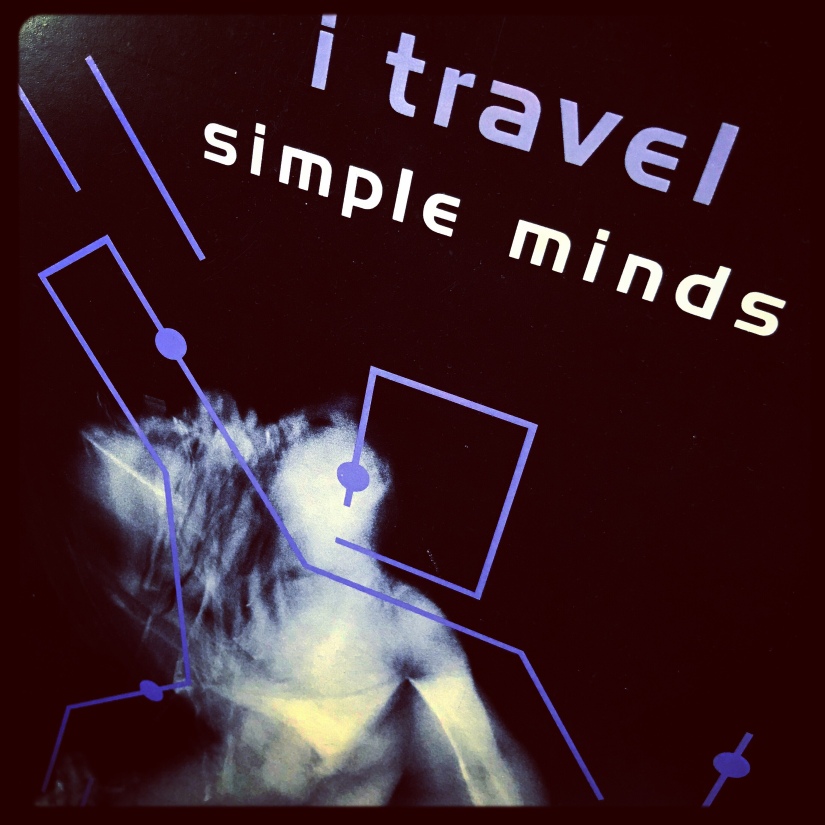 I Travel was the first track on that album and signalled a brave new direction for the band. Its clattering, steam-powered industrial funk is propulsive, futuristic (still) and highly infectious. It’s the sound of industrial Victorian Glasgow breaking free of its chains, the sound of the shipyard welders’ blow torches set to scorch, the sound of Donna Summer’s I Feel Love as played by art punks from the south side of Glasgow.

I have two copies of I Travel. There’s the original, 12″ version, bought on a rare outing to the Virgin Megastore on Union Street, back in the days when folk still smoked behind the counter and you darenae go up the stairs to the second floor on account of all the scary-looking punks and their brothel creepers blocking the way. I also have a reissued 7″ found whilst rummaging through a box of Gene Pitney and Sonia 7″s in a Lake District charity shop. I was scared to leave it there, unsure of what fate would befall it should I put it back. The 12″ is a well-played piece of vinyl. It was often the soundtrack to drunken teenage stupidity, stuck on at filling-loosening volume as soon as someone’s parents had reversed out the drive for a week in Wales. It’s a great record.

How did they write it? It’s not a guitar tune in the traditional sense. You won’t find the chords on your favourite tab site. Wee Charlie adds occasional textures here and there, and there’s a fantastic blink-and-you’ll-miss-it Nile Rodgers-esque flourish midway through, but the song’s genesis must lie somewhere between Derek Forbes’ groovy never-ending bass, the sequenced synths and that head-nodding, rattling rhythm. Imagine being there while the band jammed it, working all its nuances out?! Played live, it’s a cracker;

With the benefit of acquired musical knowledge, it’s clear that Simple Minds had been listening to the right sort of European records. Kerr’s baritone echoes the more esoteric moments from Bowie’s Berlin phase and he sings of culture; decadence and pleasure towns, tragedies, luxuries, statues, parks, galleries. He might even be singing of Glasgow – the lyric certainly ticks all of that subject matter.

Strip everything else away – the 8 note keyboard motif, Burchill’s splashes of colour and Jim Kerr’s vocal and you have a record that sounds like its made by machines with soul. A bit like Kraftwerk, I suppose. In fact, if it popped up vocal-free on 6 Music tomorrow, you could be forgiven for assuming its retro-futurism was the latest Underworld release.

Expertly glued together by John Leckie, I Travel hints at a group of musicians growing into themselves. Hindsight shows that Simple Minds went on something of an imperial run around this time. Imagine if I’d never looked back and instead fell for the stadium shows and the hey hey hey heys. There’s an axis-turning thought.