Late 1970’s Britain was grimy and unpleasant, the era of strikes, dead bodies unburied, rat-infested rubbish collections and mass unemployment. Not for me though. I was happily oblivious in the suburbs of Ayrshire, whizzing everywhere on my bike, cardboard clattering the back spokes, playing in fields where houses and hotels now stand. But when you see footage of the era on the telly, it’s as if everything’s in black and white, a monochrome world where everything and everyone was kept in their place by Margaret Thatcher.

Driven by righteous fury and social discontent, the 2 Tone movement blew in like some sort of multicultural whirlwind, an era-defining mash of black and white houndstooth, Weejun loafers, button-down collars, Harringtons and Crombies. The label dropped off a perfect discography of 7″ singles and just as suddenly disappeared again.

At the label’s peak, between ’79 and ’81, just 17 singles were released. They went on releasing right up until 1985 with diminishing returns (The Specials finished what they’d started with Sock It To ‘Em, JB , the 32nd and final release) but it’s those 17 tracks released during 2 Tone’s golden spell that really endure. Many of those tracks are indelibly inked on the brain; Gangsters, The Prince, Do Nothing, Tears Of A Clown, Too Much Too Young, On My Radio, Nelson Mandela, Ghost Town….. classics one and all.

I had loads of them. Now and again on a Saturday morning I was given £1 and it always went on a 99p single. A few years later I gave them all away to a ‘Feed The World’ jumble sale, regretting it even as I handed them over. Geldof might never have said, “Give us yer fuckin’ money,” but I’m pretty sure he did say, “Give us yer fuckin’ Specials’ singles!” A selfless act but stupid too. I still rake around in the darker corners of record shops, hoping I’ll discover one of my old records, identifiable by my initials on the inside of the cover. I’d seen my dad do this with his records, so I just thought that’s what you did. Anyway, I’ve yet to turn up a Baggy Trousers or Stand & Deliver that has my pre-teen scrawl on it, but one day I might.

I do have a wee collection of 2 Tone singles though, bought for not much more than I’d originally paid for them, waaaay back when records were far from the trend they currently are. They’re great. Identifiable by the generic Walt Jabsco sleeve, they’re a portal to something special (no pun intended). Owning them, you’re part of a club, a tribe. Play them and you’re transported back to the time, the grimness of the era swatted away in 2 and a half minutes of punkish, skankalong ska. Flip them over to the b-side and you’ll often find a gem the equal (or even greater than) the better-known a-side. 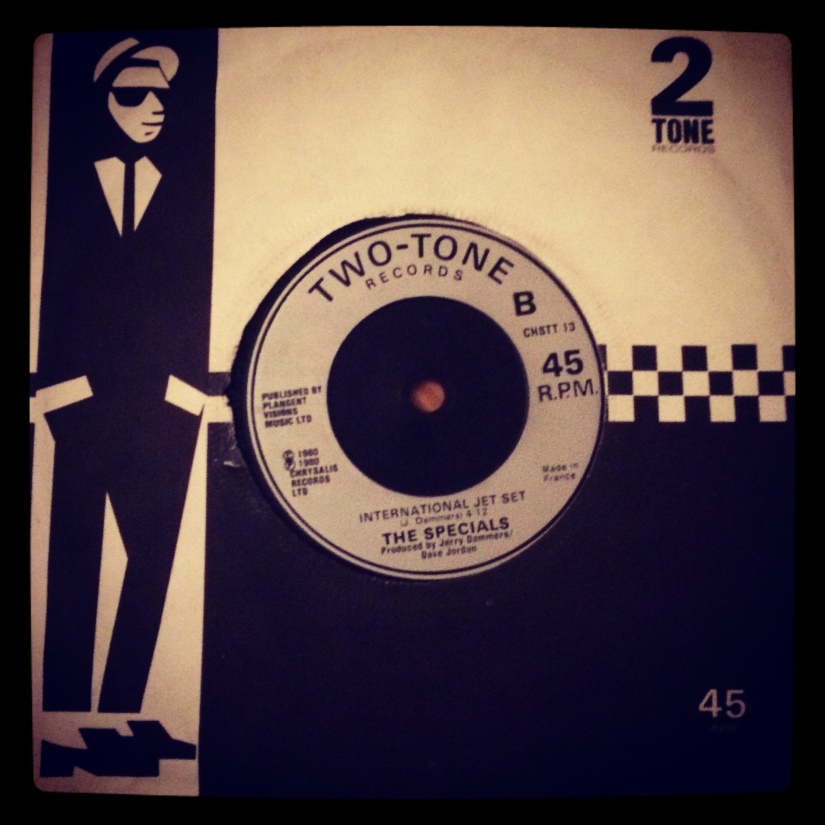 Stereotype was The Specials‘ 5th single. By now dabbling in exotica and playing the sort of instruments you might find employed on an Andy Williams record, Stereotype mixed skirling bullfighter trumpets with flamenco guitars and some rudimentary primitive drum machine. The reverb-heavy backing vocals were the blueprint for what would appear on their Ghost Town single, Hammer House of Horror by way of Coventry.

Stick on the other side though and you’ll find International Jet Set, a fantastic slice of wonky ska, descending basslines, eerie vocals and Rico and Dammers playing what sounds like an extremely drunk call and response of The Sun Has Got His Hat On on slide trombone and keys. Rico aside, the band were all in their early/mid 20s at the time, which, given the fact that they conceived this tune out of mid air is, to coin a phrase, really sayin’ something, bop bop shoobedoo-wop. It’s extremely well-produced, and, I say this knowing full well how wanky this will appear, it sounds really terrrific on vinyl.

The first 2 Tone release was The Specials‘ Gangster on one side with The Selecter‘s self-titled instrumental on the other. With more time spent on the a-side than anticipated, the b-side was flung together when John Bradbury, The Specials’ drummer suggested an old instrumental that he used to jam with an old band. Hastily reworked, more slipping and sliding trombone is offset by the offbeat rhythm guitar and filling-loosening bass. There’s spaghetti western guitar, sk-sk-sk hi-hat action and enough groove to fool you into thinking this was a tune played by a band who’d been playing it for years. Indeed, The Selecter appeared really before the band of the same name. As would appear to be the norm with 2 Tone, this is another rich production. When it plays, you feel as if you’re right in the room with the band. The mark of a great record.

Those 2 Tone sleeves were designed by Jerry Dammers after seeing a picture of Peter Tosh (above, right) on the cover of The Wailers ‘Wailing Wailers‘ LP. Liking his ‘defiant and Jamaican and hard‘ image, Dammers created the ubiquitous Walt Jabsco. But you knew that already. Pop art for disenfranchised youth. And wee boys like me who rode the Sillar’s Meadow speedway with all the fearlesness of Evil Knievel.

2 thoughts on “Cheque One Two”