For folk of a certain age, Candi Staton is best-known for the horn-driven, string-swept ‘Young Hearts Run Free‘, the disco track that burned up the charts in the boiling hot summer of 1976. It’s such a golden oldie standard these days that it’s easy to forget just how brilliant it is.

For folk of a different certain age though, she will be best known (maybe even only known) for ‘You Got The Love‘. A track initially released 10 years after her only other hit single, it finally came to prominence 5 years later when The Source transformed the original version into a slowed-down, hands-in-the-air rave generation anthem. With its sparse bassline and E-friendly lyric, it captured the mood of the times perfectly.

The Source feat. Candi Staton – You Got The Love

What many folk might not realise is that Candi Staton is as far removed from the notion of one (or two) hit wonder as is possible. Starting out in the mid 50s as a gospel singer (of course – where else can you develop a voice as powerful, as raw, as sky-scrapingly soulful as hers?) she did the rounds of the secular circuit, regularly crossing paths with a young Aretha Franklin and her preacher dad as they likewise found the feet and voices that would stand them in such good stead in the future. 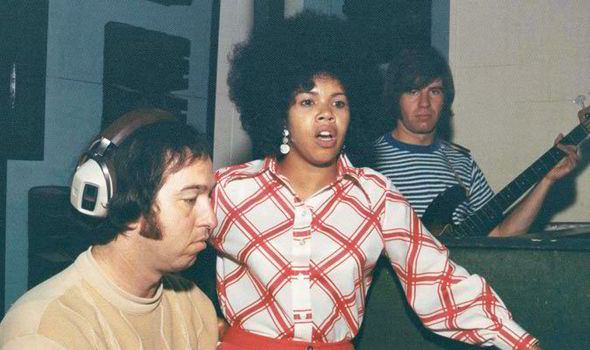 Growing out of the gospel scene, she signed to Fame Studios in Alabama’s Muscle Shoals and re-branded herself as a Southern Soul belter, a big-voiced, big-haired ‘story’ singer. Her versions of Stand By Your Man and In The Ghetto were nominated for Grammys.

Candi Staton – In the Ghetto

Backed by a countryish, harmonica-led clip-clopping rhythm and see-sawing strings, the production places great emphasis on her voice; rich and soulful, skirting across the top of the original with comfortable ease. Just a thought, but had Brian Wilson visited the wide open vistas of the south instead of playing in his sandpit, he might’ve made records like this.

Fast becoming the go-to act for A&R men who you fancied taking a standard (Nights On Broadway, Suspicious Minds) and turning it into a soulified smash hit single, Candi’s albums at the time were criminally neglected, yet they’re packed full of terrific, rarely-heard Southern Soul smashes; story songs that build and peak and turn you inside out with guilt and pain, yet can keep you dancing all night long.

Candi Staton – I’m Just A Prisoner (Of Your Good Lovin’)

There’s real grit in her voice, the kind of grit that surely only comes from being a God-fearin’, six-times married Southern woman. Perhaps she took the words of her own Another Man’s Woman, Another Woman’s Man a little too literally, given that it’s a classic cheatin’ song, a waltz-time tale of infidelity and indiscretion sung from the heart.

And here’s The Thanks I Get For Lovin’ You, another loose ‘n funky track that calls to mind Aretha in her late 60s peak. A confession song in the same lyrical vein as the one above, you’d think she’d have learned her lesson by now.

Candi Staton – The Thanks I Get For Lovin’ You

A few years ago, Damon Albarn’s Honest Jon’s Records released a brilliant Candi compilation that gathered together much of the best material from this era. Heartache and heartbreak just never sounded so good. I would tell you to buy the album, but as mock Cockney Damon Albarn might say, that’d be Staton the bleedin’ obvious mate. Bad puns aside, you really should investigate it.