2016 has been a shitty year for musical deaths, but it’s also a year that holds much in the way of stellar resurrection. No pun intended.

Trashcan Sinatras begin a US tour tomorrow with Pledgers keen and eager to hear live versions of the excellent, slight change of direction new album they’ve been living with for a couple of weeks. Non-Pledgers have a few more weeks to bide their time before they can hear what all the fuss is about, but believe me, it’s worth the wait.

The ever-reliable Teenage Fanclub have a new LP due for imminent release. With fingers and toes crossed, I expect no less than three-part harmonies and all manner of chiming, fuzzing, clean-clanging vintage guitars.

Radiohead had the Internet and its granny in a big frothy lather last Sunday with their guerilla tactics when their new LP arrived virtually, welcomed with many open arms and followed by much over the top gushing praise. It’s a cracker of an album, maybe even album of the year. Each listen brings new things to the fore; subtleties, soundscapes rather than songs, much of the background electronica reminiscent of Brian Eno’s ‘Bloom‘ app. Seriously. I could listen to it for the next 4 months and still change my mind over which track is my favourite. Today it’s ‘Ful Stop‘. Tomorrow it’ll probably be ‘The Numbers‘. Or ‘Glass Eyes’. Or…. 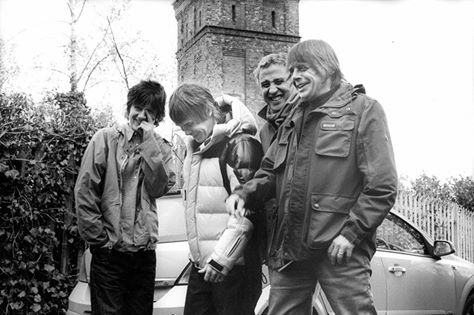 But The Stone Roses. Dear oh dear. Hopes were high. Not sky high. They’re the masters of the big letdown after all. I remember, pre internet days, turning gangs of lads away from the Our Price counter on Feb 14th 1992, the intended release date for the big ‘Love Spreads‘ comeback. The single (a magical comeback single, it must be said) finally crept out in November 1994.

Stone Roses – All For One

Stone Roses have only just gone and spectacularly pissed all over their legacy, submerged it totally in golden yellow effluence in fact, with a limp-wristed clunky identikit indie single that in the mid 90s would’ve struggled to find its way onto third place on a Seahorses CD single.

Interestingly, it was premiered on also rubbish Radio 1, last relevant when Brown and co were casually throwing out spacedust-sprinkled pop nuggets with giddy abandon. Squire’s guitars do the clunk click every trip pseudo psychedelic riff. Guitar shop heroics that he should be well away from by now. He’s in his 50s, for crying out loud.  Brown’s lyrics are laughable.  “All for one and one for all. If we all hold hands we’ll make a wall.” Sweet baby Jesus. And Mary, mother of God. This is not the resurrection.

For a band who once glided effortlessly above and beyond pop cool, this is a divebomber of quite catastrophic proportions. Even those folk who’ve been going nuts for it on social media – y’know, the folk who like all kinds of music, ‘Kasabian, Noel G, everything, really,” will surely be feeling a wee bit short changed by now.

Best thing about the comeback? That the band chose to pose for a photo with my car in the background. My old Astra is far more of a banger than the single. It, my friends, is a total car crash. Biggest musical death of 2016? Aye, Bowie and Prince were shockers. But The Stone Roses have just trumped ’em all.