One of the many things I do outwith the blogosphere is that I’m involved in putting on gigs in my wee corner of the world. It’s not something I mention much on here, partly because much of the music, while really great, doesn’t really fit in with the ethos of what Plain Or Pan is about (ie, old stuff by old bands.) I became involved when a small group of us got talking about all the big acts who’d come to Irvine as part of their UK tours. Irvine, believe it or not, was quite the hotbed at one time; The Clash, The Jam, The Smiths, Madness, Chuck Berry, Big Country, Bjork, Oasis, Supergrass, Thin Lizzy, The Wonderstuff….. all graced our wee town with their presence. They were brought here by one man, the great Willie Freckleton, and when he died a few years ago, the council failed to fill his position and the acts dried up. Irvine is a deprived town, and starved of popular culture, it can feel even more depressing than it should. So, along with my like-minded pals, we decided to act.

We organised a festival, Freckfest, named in Willie’s honour, and put on The Magic Numbers at the top of a bill including local acts. It was always Willie’s thing that he’d have a local act supporting the big visiting star. It might’ve been the local band’s big break, but more often than not it was their brief spotlight into the glitzy world of rock ‘n roll before imploding in a storm of musical differences and stolen drummers. All of us in the past benefited from Willie’s ideal and in the distant past you’d have caught us gleefully thrashing away in our own no-hope bands as we warmed the audience up for BMX Bandits or John Martyn or whoever else was in town. Great times!

Now that none of us are in ‘promising local bands’ any more, we felt it was time to take the baton left behind by Willie and pick up where he left off. The Magic Numbers show was not as well attended as we’d have liked, but it was a brilliant event and everyone who came to it asked if we’d be doing more things like it. Fast forward 2 and a bit years and we’ve now been given a monthly slot to fill in the local arts centre. We’ve had all manner of acts in there; Nik Kershaw for 2 sold out nights, solo Glenn Tilbrook Squeezed in-between concerts he was playing with his day-job band, up-and-comers like Neon Waltz, broadcaster Andy Kershaw who told us tales of a life less ordinary. Wherever possible, we’ve had local acts playing support. Last year we landed Johnny Marr, and without a suitable venue in Irvine, we put him on in Kilmarnock. Suddenly, it’s getting quite serious, and we could be doing gigs twice a week if we had the time and resources. Not bad going for a bunch of enthusiastic unpaid volunteers.

On Friday night we kicked off our 2016 calendar with a full house (and a waiting list of gig goers desperate for any spare tickets), guaranteeing that tickets for a Songwriters’ Circle featuring James Yorkston, Withered Hand and The Pictish Trail were the hottest in the country.

“We headlined Celtic Connections last night,” intoned the quietly-spoken Yorkston during the second half. “…as the warm-up for Irvine.” Cue massive cheers and applause. By all accounts the previous night’s show had been a cracker, and judging by the weary-looking faces on the three performer’s faces, they’d made the most of the offer to indulge in the Festival’s legendary after-show hospitality.

“I got to bed around 4am,” sighed James. “I left Johnny (Pictish Trail) and Dan (Withered Hand) to it.” With three under-par performers, fresh from the glory of a massive Celtic Connections show and squeezed onto the HAC’s ‘stage’ (it’s actually just a space on the floor where a local am-dram group might perform, surrounded on 3 sides by banks of seating – a brilliant, intimate, whites-of-the-eyes venue), this didn’t bode well for the night ahead. The artists even admitted as much afterwards. We shouldn’t have worried.

Beginning with Withered Hand’s ‘Life Of Doubt’, replete with a wheezing Neil Young-ish harmonica and some excellent finger-picking, the trio rolled out two terrific sets of well-paced originals. The plan was that each artist would deliver 10 of their own songs, accompanied by the other two on occasional instrumentation and backing vocals. Given that they had been playing as a group for the previous two weeks on tour, by the time they arrived in Irvine they were extremely comfortable in one another’s company and were well-versed in one another’s material. 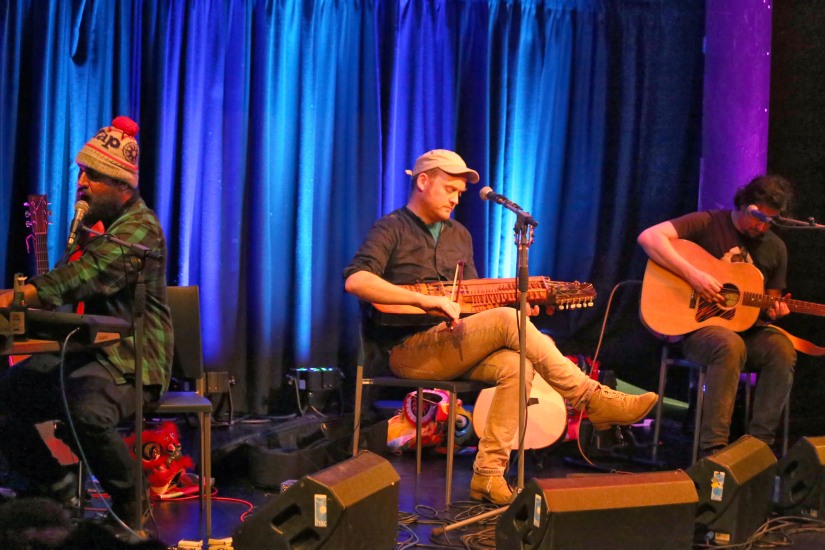 Withered Hand gave way to James Yorkston, airing the best bits of an embarrassingly-rich back catalogue in-between some highly entertaining stories and light-hearted put-downs of his band mates. A highlight of the first half was the version of Withered Hand’s ‘California’, all triple-part, slightly-skew-whiff harmonies, delicately plucked 6 strings and moody atmospherics. I tend not to write notes during a gig, but during this one I wrote ‘McCrosby, Stills and Nash’, which will make perfect sense to anyone there.

If James was the dry-witted, droll one with the introverted tunes, and Dan the slightly foul-mouthed one with a keen ear for the closest thing to a pop song you’d hear all night, Johnny Pictish Trail was the extroverted, out-going leader of the pack.

His tunes veered from folkish, socially-conscious beauties to (bizarrely for half the unsuspecting audience) lo-fi, electro-enhanced 30-second wonders with subject matter ranging from getting your foot stuck in concrete to sweating battery acid. “Is it my turn now? Ok! Would you like a disco song or a depressing song? Tell you what, here’s a depressing disco song…” And just as your ears were recovering from the aural assault, it’d be back to James who’d tell a brilliant monologue about last night’s hotel, before working the band into an intricately-woven arrangement of one the choicest cuts from his dozen or so long players.

The audience sat in reverential silence, laughed at the easy-going on-stage patter shared between the three artists and lapped up what is already a contender for Gig Of The Year. As the artists signed merchandise and chatted to fans at the end, they too agreed this had been the best night of the tour, and not just because they’d raided the HAC’s wardrobe department and appeared for the 2nd half wearing three Chinese dragon heads. Honestly, you really had to be there…