William It Was Really Nothing is the sound of The Smiths in miniature. A breathless rush of brilliantly ringing descending arpeggios, bright as brass buttons, topped off with a vocal that distills everything about Morrissey’s much-loved kitchen sink dramas into a handful of lines worthy of Alan Bennett;

‘The rain falls hard on a humdrum town, this town has dragged you down……Everybody’s got to live their life, and God knows I’ve got to live mine……….How can you stay with a fat girl who says, “Would you like to marry me? And if you like, you can buy the ring”……‘ 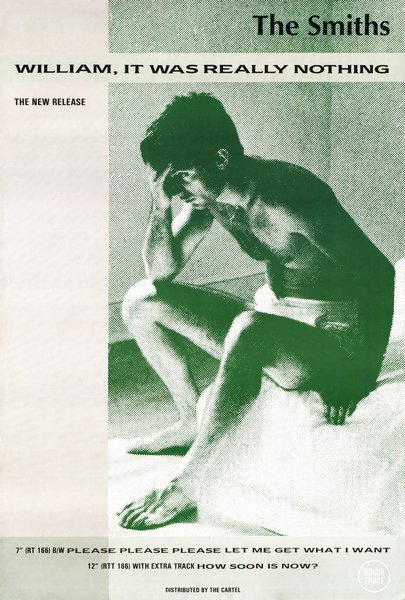 Johnny’s playing is at its most stellar, riff upon riff upon riff of layered guitars nattering and chattering away like Elsie Tanner spreading ghastly gossip about goodness-knows-who over the garden gate. He was in a rich vein of form when he wrote this, was Johnny. He worked the chords out in the back of The Smiths’ van on the M1 somewhere between Manchester and London. Arriving at his flat in Earls Court, he committed his frantically scrubbed faux flamenco  pièce de résistance to tape, where it would sit alongside his other new compositions for that weekend, vying for the attention of producer John Porter come Monday morning. That the other 2 new tracks he’d recorded were How Soon Is Now? and Please, Please, Please, Let Me Get What I Want (the tracks that would turn up on the b-side of the single itself) just goes to show how prolific a tunesmith (tune-smith! See what I did there?) the barely 21 year-old Johnny was. Frightening, if you stop to think about it.

William It Was Really Nothing – Peel Session (August 1984)

The Smiths clearly loved William It Was Really Nothing – they played it in concert before recording it (first for Peel, above) and continued to play it throughout the tours of 1984 and 1985. It still had its place in the ’86 setlists when the briefly 5-piece band were at their most rockist and was the second-last song The Smiths ever played live.

When John Porter got ’round to working on it from Johnny’s demo (and who knows how he chose what track to tackle first) he sprinkled a magical dusting of fade-ins and fade-outs, backwards bits and bursts of guitar that are the aural equivalent of one of those time-lapse videos of a flower blooming you see on nature documentaries. It’s just perfect, and even after 30 (gulp!) years, every listen reveals new things.

William It Was Really Nothing – Single Version

William It Was Really Nothing is over and out in little over 2 lean, mean and meat-free minutes, which, if I’ve timed it right, is just about as long as you needed to read this piece. Beat that!

6 thoughts on “Romantic And Square Is Hip And Aware”