Few bands have gone through the mill quite like The Charlatans; Jail. Rip-offs. Death. And few bands have managed to subtly change their sound from album to album, forging new ground while sounding instantly familiar and recognisable. 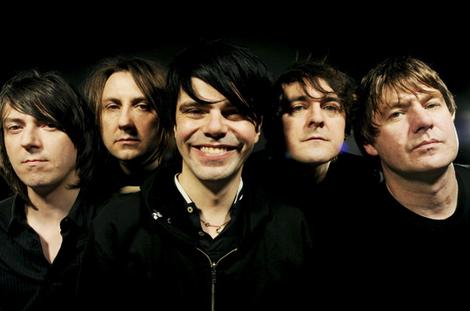 It’s not obvious to many except the obsessive Zim-head, but its all there. The warning signs were already in place with 1997’s Tellin’ Stories LP, an album that featured the soon-to-be single and Dylanishly-titled North Country Boy.

Another track, One To Another, went on to become one of their biggest selling singles, replete with the very Bob ‘Can you please crawl out your window‘ line towards the end.

Can You Please Crawl Out Your Window? was a little-known Bob Dylan single from 1965, recorded with The Hawks as backing band during Dylan’s quest for the ‘thin wild mercury sound‘ that he arrived at on Blonde On Blonde. Little more than a footnote in Bob’s history, it remains groovy proof  that the Rayban’d Dylan could do beat music as well as anyone. As Tim Burgess and co. knew fine well.

Can You Please Crawl Out Your Window?:

1990’s Us And Us Only LP is, for me, The Charlatans’ absolute peak. Weird, wonky but still packed full of hummable tunes, it makes a good Anglophile companion to Mercury Rev’s Deserter’s Songs LP. But I digress.

The key to the weirdness lies in the album’s submergence in mellotron. Where previously the full fat riffs of the Hammond had directed the band’s sound, Us And Us Only is carried along by the gossamer-thin weirdness of the most unlikely of lead instruments. Not on every track, but you don’t have to listen too hard to hear it weave its magical spell throughout. Isolated out of context though, the more straight-forward tunes are secretly in debt to Dylan.

There are three in a row on the first side alone;

Even the lyrics could’ve come from the hand of Bob himself; “I can help you, will you only ask me kindly“, “my freedom is a vision you seek“, “this song kind lady is my only hope“, “Y’know he looks like a plastic surgeon“, “Your new friend he seems to love you, I hope he cries himself to sleep“. It’s all very Bob. I can actually hear him sing it every time it plays. In fact, Impossible might well be the best Dylan track he never wrote. It is a cracker.

Following Impossible you get the waltzing light and heavy shades of The Blonde Waltz.

The Blond Waltz (no ‘e‘ in Dylan’s version – see above) was taken from the name of a passage (or chapter? who knows) in Dylan’s answer to the jabberwocky and stoned ramblings of Lewis Carroll. You could call it experimental prose poetry. Or cut ‘n paste stream of consciousness. Either way it’s a frustrating read – if you persevere long enough, brilliant little moments of clarity peek out from behind an amphetamine fug. The Charlatans have read it though.

Tim doesn’t quite sing A Hard Rain’s A-Gonna Fall‘s “where have you been my darling young one” at the start, but you know he wants to. There’s a good chance some of the album’s lyrics came from Tarantula. Pure speculation on my part of course….

A House Is Not A Home takes its cue from ’66 Dylan. Heavy of Hammond and rich of riff, the tune is a clever appropriation of the version of I Don’t Believe You (She Acts Like We Never Have Met) that a hot-wired Bob and the Band played to a few appalled folkies and a thousand grinning Cheshire Bob cats up and down the UK in the spring of that year. It’s electric in every sense of the word. Judas my arse.

A House Is Not A Home:

I Don’t Believe You (She Acts Like We Never Have Met):

The track that follows is called Senses. Stealing its musical cue from the mellotron madness of the Stones in all Their Satanic Majesties Request pomp, it goes on to liberally lift lyrics from Jagger and co’s Sweet Black Angel. Elsewhere, you’ll hear a straight-forward photocopy of Only Love Can Break Your Heart in the intro to I Don’t Care Where You Live and the beating pulse of Another Brick In The Wall in My Beautiful Friend . But those are other stories for other days.

You should dig out your copy of Us And Us Only forthwith. It’s a truly terrific album, one that still stands up to repeated plays today. It plays best when listened to as a whole. Aye, you can pick holes in the individual tracks all day long, but the album doesn’t deserve that.

If you don’t have it, on account of thinking The Charlatans were nothing but bowl-headed baggy chancers, now is the time to find out there’s more to them than that.

Of course, The Charlatans have form for this kind of thing. Talent borrows, genius steals ‘n all that. Step forward Pink Floyd…