Radiohead play both types of music – arty and farty, and they’re still the band by which all others must be measured. In comparison, everyone else just doesn’t sound like they’re really trying, do they?

Radiohead haven’t stood still. The left-field rock double whammy of The Bends and its more adventurous follow-up, OK Computer would’ve been the pinnacle of many a band’s career – lesser bands would maybe even have stopped after such an explosive one-two. Other bands (hello Coldplay, we’re looking at you) took lowest common denominator Radiohead and churned out the Asda price version, to much ringing of cash registers around the world. How could you improve on two great albums? Not many could. For some people, Radiohead couldn’t either. But you know better….. 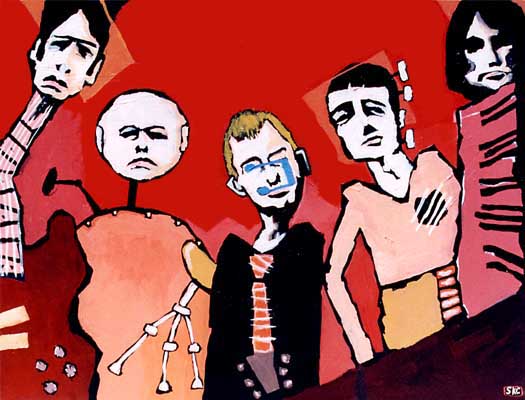 I like the experimental, itchy, claustrophobic Radiohead. The static bursts. The skittering drums. The are-they-guitars-or-are-they-keyboards? The cut ‘n paste approach to the vocals. The way everything is wrapped, womb-like in its own wee Radiohead bubble. Recent Radiohead has been all about the sonic textures. The ebbing and flowing. The peaks and troughs. The grooves rather than the grunge.

These Are My Twisted Words was put up for free download a few years back on the band’s website. I’m sure you’ve heard it;

From the warped intro via the chiming, falling-down-a-hole guitar riff that surfs across the top, the whole thing jerks and twitches away like Thom Yorke’s gammy eye whilst maintaining an actual tune – the perfect amalgamation of all that makes Radiohead great. Lots of people moan that the ‘Heid have lost their way with a tune. Sit them down and play them this. The only way it could be better was if it was three times the length.

Where I End And You Begin is all swirling ambience and one chord groove. Hip hop drums and phat bass. But still slightly wonky and weird. It’s on Hail To The Thief, a quiet contender for title of Best Radiohead Album. I’m sure you’ve heard it too;

Post-rock Radiohead remind me an awful lot of pre-rock Simple Minds, back when they were releasing arty, Eastern European influenced glacial soundscapes. Equal parts post-punk snottiness and Bowie metallic art punk with a Kraftwerk man machine-like muscle, this was not music to punch fists in the air to. It was cerebral yet danceable. It aimed for basslines rather than headlines.  Perfect headphone music. Mandela Day and Belfast Child were somewhere in Western Europe, a million light years away.

Here’s a couple of early Simple Minds tracks. Note the influence on mid-period Radiohead. They won’t deny it.

This Earth That You Walk Upon

Have you got Polyfauna, the Radiohead app yet? What d’you think?