Elvis may have been the King, but Little Richard was certainly the Queen. He’s terrific, isn’t he? The high priest of camp; his pompadoured hair like a Texan oil slick, sticky and stationary above those mad, popping eyes and perfectly plucked brows, the occasional dog-bothering ‘whoooo!’ while his hands pound away on the pianer with all the frenzied dexterity of a teenage boy with unlimited broadband and a lock on his bedroom door. Tee-riffic.

Slippin’ And Slidin’. Tutti Frutti. Lucille. Good Golly Miss Molly. Rip It Up. Long Tall Sally. Every one a throat-ripping, stone cold classic……..the building blocks of rock and roll and all that was to follow. But you knew that already.

‘Before Elvis, there was nothing‘, said John Lennon, but The Beatles owed Richard Penniman a huge debt or two. McCartney for one modelled his whole voice on Richard’s every single time his group broke free from the shackles of balladry and ruffled their rugs to the delight of the watching world – from the backing vocals on The Beatles’ own version of I Wanna Be Your Man right through to the White Album’s Why Don’t We Do It In The Road, the spirit of Little Richard was never far away.

The Most I Can Offer (Just My Heart) is superb. Released on his 3rd album The Fabulous Little Richard by a slightly twitchy record company after he’d indicated a preference  for thumping the bible rather than the thumping boogie woogie of yore, The Most I Can Offer is a mid-paced soul-shaking break-up ballad (of course!), all rasping tenor sax and ding-ding-ding minor 7ths on the keys. It throws me every time. Why? Because it sounds like a duet between a high, quavering falsetto’d voice and a southern souler. Imagine if William Bell had sung with the black cleaner lady who appears from the waist down in every Tom And Jerry cartoon. Except The Most I Can Offer seems to be Richard and Richard alone, his voice alternating between broken-hearted blues mama and a down-on-his-knees tear-soaked gospel bawler. The version I’ve given you is Take 4. Which sounds exactly like takes 1, 2 and 3 and no doubt the master version too. If you have but an ounce of soul you’ll want to play this again and again and again.

Hey Hey Hey Hey, as reprised on the Beatles For Sale LP by those self-same Little Richard fans mentioned earlier. An out-and-out rocker, this features Richard at his most extreme, extravagant and extraordinary, pompadour bouncing while the piano pumps out primal jive ‘n wail. You can almost see the whites of his eyes on this recording.

And if you think the original’s good, you should have a listen to the Jim Jones Revue‘s outstanding needles-in-the-red version;

Proof, if any were needed, that Little Richard is as relevant today for any musician seeking the mother lode of rock ‘n roll. 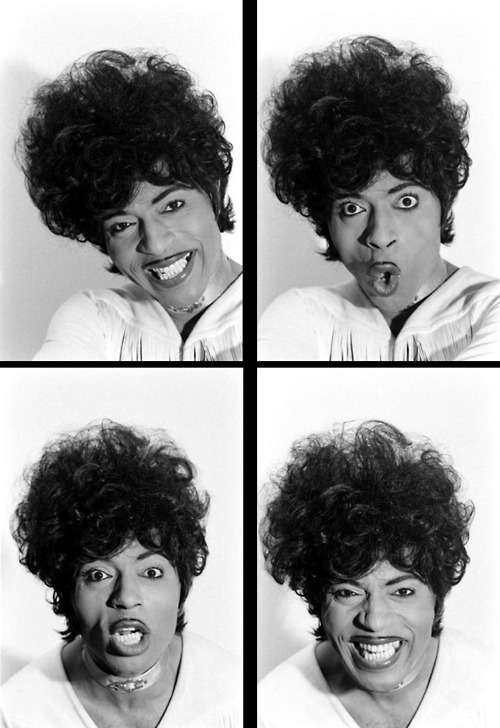