Ian Rankin barely needs any introduction at all. An East Coaster schooled in Cowdenbeath and at the University of Edinburgh, he’s most famously the internationally renowned creator of  the Inspector Rebus novels. Like the best literary heroes, Rebus is a bender of rules, a doer of wrong in the pursuit of right, and his malt whisky-soaked character flaws and imperfections have captured the imagination of many a reader. Translated into numerous languages, each Rebus novel will casually shift in excess of half a million copies in its first 3 or 4 months of publication. According to Wikipedia (I know, I know…) they account for 10% of all crime fiction sales in the UK. Many of the stories have successfully made the transition from printed word to celluloid. People, many thousands of people, have discovered the work of Ian Rankin not only from the library but also from the television. With an OBE for services to literature, countless honorary doctorates and more Crime Writers Association Daggers than an end of the pier act on Britain’s Got Talent, Ian Rankin is, in short, a dead famous author.

Ian is also a well-known music fan. Follow him on Twitter and you’ll discover just how regularly he visits his favourite record shops, goes to gigs and enthuses about new music. With a nod and a wink and an eyebrow permanently arched, his writing is liberally peppered with music references and trainspotters like myself enjoy looking for them all, silently hoping that it’s only us and the author who are in on the secret but knowing full well that half the population gets it too. Off the top of my head, his various novels have been titled Let It Bleed, Black And Blue, Beggars Banquet (all Rolling Stones LPs), The Hanging Garden (A Cure track, more of which later), Exit Music (A Radiohead track) and Dead Souls (Joy Division). There’s also the Heartache Cafe in The Black Book that sells Blue Suede Choux for dessert. Read the novels and you’ll find many more. 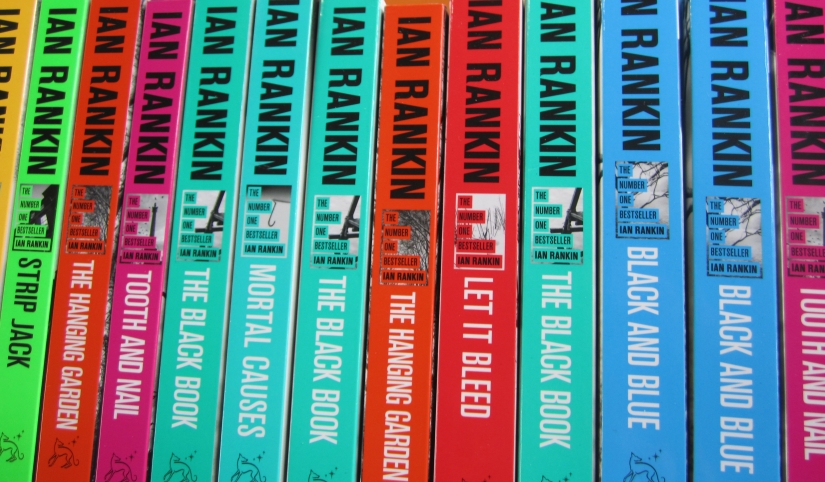 I came late to Ian Rankin’s books. Fortunately as it turned out, you don’t need to have been with him from the start. Yes, Rebus novels have wee themes going through them and they regularly refer back to previous characters and cases that Rebus has worked on, but you don’t necessarily need to start at the beginning (1987’s Knots And Crosses) and work forwards from there. You can start anywhere. Just jump in and you’ll quickly get the measure of the man.

Somehow, for reasons I don’t really know, I’d missed out on all of Rankin’s books until my father-in-law handed me a couple, telling me to read them because I’d like them. He was right. And so, during the summer holidays a couple of years ago I found myself in the midst of a Rebus marathon. The first one I read was Mortal Causes, about the tattooed body of a gangster being discovered, and where I met Big Ger Cafferty for the first time.

You probably know already, but it’s dead easy to get hooked on a Rebus investigation. I was going through a Rebus novel every couple of days and found myself totally immersed in his tangled life of complicated relationships and petty workplace politics. Although an Ayrshireman, I could still pick out recognisable Edinburgh landmarks and streets (Mary King’s Close, Fleshmarket Close, The Oxford Bar) that helped place the stories in the real world, in the here and now, as opposed to some made-up fantasy land a million miles from reality. I’d find myself desperate to revisit Edinburgh and perhaps stumble upon the corners and closes where many of the crimes Rebus was investigating had taken place. 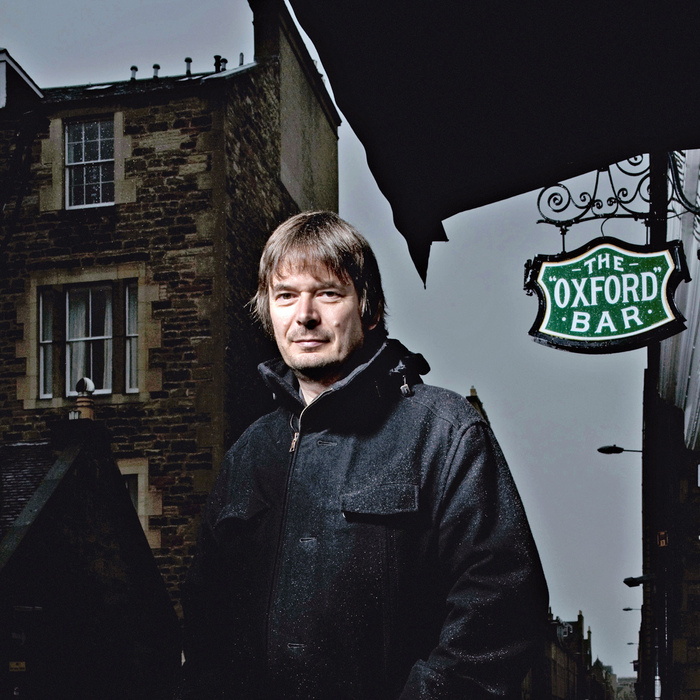 During this self-induced Rebusathon I happened to be channel-hopping late one night, past BBCs 3 and 4 where nothing of interest was on, past Sky Arts where a repeat of a Smiths concert was on (Rockpalast – it’s very good, but I’d seen it half a dozen times already), past Channel 4 movies, past the shopping channels, past Al Jazeera TV until I rested on some short-lived channel that may or may not have been called Sleuth TV. I’m not making this up. On Sleuth TV was an adaptation, I quickly realised, of Strip Jack, the Rebus story I was currently half-way through. I started watching but immediately, just as I was thinking, “Turn over! You don’t want to know how the story ends!” the killer was very clearly being unmasked, and the scene played out loudly and unavoidably on the telly in front of me. Unfortunate timing. To this day, Strip Jack remains the only one of Ian Rankin’s Rebus novels I have never finished.

Anyway.  Enough flim-flam from me. Ian’s ‘Six of the Best‘ is right up Plain Or Pan’s street. Over to the man himself…

When Desert Island Discs asked me several years back for my top 8 songs, I started with a Shortlist of 40. So I’ve decided here to go with six tracks that may not be all-time favourites but mean something to me and should be listened to more often.

I probably want this played at my funeral. It was one of the first records I bought, and I still own and play that original 45. To me it means rock, and sci-fi, danger and otherworldliness. Smashing.

‘You Can’t Always Get What You Want’ by the Rolling Stones.

I remember hearing this when I was 10 or 11 and not being impressed. By the age of 30 Let It Bleed was my favourite album and it’s still up there. A beautiful piece of music with a lyric that captures a moment in social history. A really hopeful song to round off a great album. Mourners may leave my funeral service with Hawkwind ringing in their ears, but as they walk into the chapel this is what they might hear.

‘Theme from Shaft’ by Isaac Hayes.

When I was a kid I loved this tune, especially the wah-wah guitar. I was too young to see the film, so I bought the book. I was amazed that a kid was allowed to read anything and everything. Books became exciting to me. And I got a taste for crime fiction. My whole career starts with John Shaft.

‘The Hanging Garden’ by The Cure.

So good I named one of my novels after it. Then used quotes from Cure songs throughout the text. Robert Smith was gracious enough to grant permission. The fee? A signed book. Always loved The Cure, and Joy Division, and Bauhaus, and… All those dark, atmospheric post-punk pre-Goth groups. I sang in one myself. They were called the Dancing Pigs and weren’t good enough. So I put them in one of my novels, too.

Jackie was a fan of my books. I didn’t know that. But I was a fan of his music and so was Inspector Rebus. Eventually we became friends, made an album, toured together. And then Jackie was gone, dead too soon. I saw him do this song many times. It’s moving, powerful, classic Jackie.

There wasn’t much of a music scene in Fife when I was growing up. Nazareth in the early 70s, The Skids a bit later. But then came KC and his Fence Collective colleagues. Love his stuff. Wrote the sleeve notes for one album. This track is quite new, and only appeared on CD this year. I saw him do it live in Edinburgh’s Queen’s Hall last year. It is a pulsing, driving, bitter tale, enlivened by cello and a terrific vocal. Dude’s a dude, bless him.

Bonus Track!
As mentioned earlier, Ian toured with Jackie Leven in 2005. Here’s a live version of the pair of them doing Exit Wound.

In 2006, Ian was the featured castaway on Desert Island Discs. There are a couple of crossover artists/records from his Six of the Best list above. You can read more about it here. Or give yourself 45 minutes and listen to an edited version of the broadcast below;

Also worth a listen is this wee curio – Tim Burgess of Charlatans fame asked Ian to write him a  short story that could be set to music. The resultant record, A Little Bit Of Powder, was read in spoken word form by actor Craig Parkinson (he plays Tony Wilson in Ian Curtis biopic Control) and given away by Tim to his fans as a Christmas present. Rather frustratingly, the Soundcloud track fades out before the story has finished. Like all good Ian Rankin stories, you’ll need to track down your own copy to find out how it ends. After all, A Little Bit Of Powder is unlikely to be shown on Sleuth TV anytime soon.

Ian Rankin‘s next Rebus novel (the 20th) Saints Of the Shadow Bible is published in November 2013.

Some content on this page was disabled on September 30, 2016 as a result of a DMCA takedown notice from PRS for Music. You can learn more about the DMCA here: