Number 8 in a series: 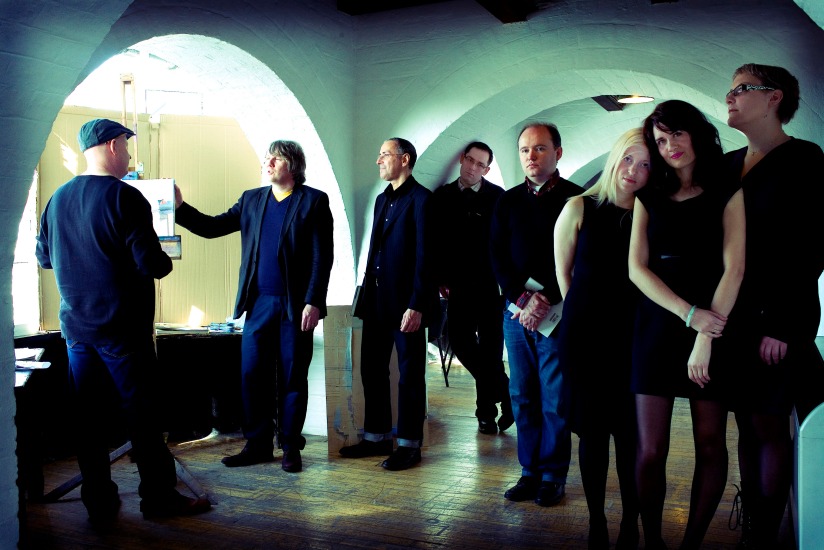 I’ve known Basil in a roundabout way for over 20 years, ever since I immersed myself in the dual rites of passage afforded to every teenage boy in Irvine in the mid/late 80’s – playing in a band and drinking in The Turf. Even then, Basil was something of the elder statesmen of the Irvine music scene and looked about 40. Of course, he’s not changed a bit since (the wee quiff, the turn-ups on the jeans and the biker boots have all been in place for as long as I can remember) and he’s now having the last laugh, looking much younger than he actually is, while releasing actual bona-fide records on real record labels that proper music fans can buy on vinyl in actual record shops.

It was something of a surprise to find out he was playing in Butcher Boy. I just assumed he’d gone the way of every promising local musician and left his guitar to gather dust just out of reach of small childrens’ hands. While some of us remain frustrated bedroom guitarists and others cashed their chips in for the starry appeal of the wedding band, it seems that Basil’s perseverance has come up trumps. Butcher Boy have been a serious going concern for the past 6 years or so and are onto their 3rd album. You should do yourself a favour and follow that link just there on the right. It’ll take you straight to the page where you can buy Helping Hands, Butcher Boy’s third (and best so far) LP. It’ll sit nicely in the space between your Felt and Belle & Sebastian records, and while you wait for it to arrive you could have a listen to Basil’s excellent Six of the Best, complete with YouTube links ‘n all……

Okay. I start with the usual caveat about this selection being the six tracks that come into my head today and the list would change if you ask me again tomorrow.

Dusty Springfield The Look Of Love (1967)

Music written by Burt Bacharach & lyrics written by Hal David and performed by Herb Alpert & The Tijuana Brass. The song was sung by Dusty Springfield for the Casino Royale soundtrack and was nominated for an Oscar. Before you think it’s unfair that it didn’t win, Best Song nominees included “The Bare Necessities” from Disney’s Jungle Book and “Thoroughly Modern Millie” The winner was “Talk to the Animals” from Doctor Doolittle… Two songs that didn’t make the nominations were “To Sir With Love” and “Mrs. Robinson“. Tough year.

“The Look Of Love” has it all – a great song, an amazing soulful sexy vocal, one of the all-time great bands playing a great arrangement and that dirty honking sax solo. A perfect record

I’ve put in a link to a live version as Dusty is mesmerising to watch.

Orange Juice In a Nutshell
I love this song. A Scottish soul classic all done without the might of Herb Alpert, Dusty or Bacharach & David. And all the more amazing that this was apparently Edwyn Collins’ first attempt at a ballad.

From the eponymous album released this year by Jonny (Teenage Fanclub’s Norman Blake and Gorky’s Euros Childs). English Lady is one of those songs that instantly got into my brain and gets better with each listen. It’s whimsical in the Ray Davis vein, but it’s daftness never strays into comedy. One of the best songs about missing an ex ever written.

I recommend the album. It’s really accessible pop and contains the Norman Blake song “Circling the Sun” that if you’re a TFC fan you won’t want to miss.

Danger Mouse & Daniele Luppi, with Jack White Two Against One. From the album Rome

A recommendation from a work colleague and an unexpected treat (not that I thought my colleague has bad taste, but that I though Danger Mouse was a hip-hop producer – shows what I know…not that I’m against hip-hop…).

The players on this album all recorded with Ennio Morricone on his western soundtracks so they know a thing or two about a thing or two. The bass playing in particular, all treble and reverb, is gorgeous. The album also features Nora Jones, who with this and her contribution to Belle & Sebastian’s last record is stamping all over my preconceptions. I picked this track as I had it blasting out the Butcher Boy van as we left Indietracks festival back in July. After the unexpected headline slot from the Hidden Cameras and a belly full of real ale, I was still on a high and this kept the party going.

Time for a duet. Stepping out in style with the unlikely pairing of Edwyn Collins and Mark E Smith. An underdiscovered dancefloor filler. A stomper, a rant. A funked-up, fucked-up groove of a delight.

Bonnie Prince Billy For Every Field There’s a Mole from the 2008 album Lie Down in the Light. Taking it all the way to the sublime now for my last choice. I own more Will Oldham albums than any other artist – eleven in all sitting on the shelf next to me. He’s released a lot of records over the years under various names and with a huge cast of players. I started with The Letting Go a few years ago and wooed by it’s rustic loveliness and haunting cello, and have been collecting his records ever since. Monorail in Glasgow always have a good stock.

His albums can be hard to get into but I’ve found that perseverance pays off. “For Every Field There’s a Mole” is one of his more accessible tracks, so for the uninitiated this is about as upbeat and sing-along as it gets. This song has an unusual dynamic. I’m not technically competent to describe what’s happening musically, but it moves me. And it has some clarinet playing that really hits the spot.

Every Six Of the Best compilation comes in a handy RAR download file. Get Basil Pieroni’s here.

I was once the lucky winner of the raffle (aye!) at one of Basil’s band’s gigs. The four scotch pies and beans didn’t quite go round everyone at our table, but we did our best to make sure everyone benefited as best as possible.

Coming next in this series –

Six Of the Best from Craig Gannon