Last Friday would’ve been Elvis’s 75th birthday. It’s anyone’s guess what he might’ve been doing had he still been alive these days. Maybe the hottest, most over-priced oldie ticket on the circuit. Having finally freed himself from the management clutches of illegal immigrant Colonel Tom Parker he’s a non-stop World Touring machine, kerchinging his way across the planet out-grossing the Rolling Stones, U2 et al along the way. Or maybe the fattest, lardy-assed multi millionaire grossing out anyone he comes into contact with in one of his few forrays into the real world, instead living out his final years in Gracelands surrounded by flunkies and 50 year old former beauty queens who still see Elvis, Shallow Hal style, as that bee-stung lip curled, hip-swinging sexual animal of old. Personally I like to think he’d be somewhere in between. By now, someone would’ve taken him aside, pointed him in the direction of some decent management and he’d have taken to touring when and where he felt like it, BB King style. Maybe an annual show at Prestwick Airport or something like that… 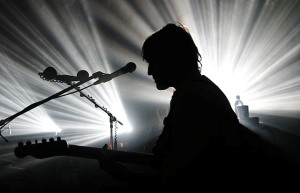 Spiritualized’s ‘Ladies and Gentlemen We Are Floating In Space’ has recently been reissued as a monster 3CD package. Jason Pierce had the opportunity to work on the remaster but somewhat arrogantly (and predictably) claimed that he’d done the best possible job first time round. Eh..not quite, Mr Spaceman. On the original 1997 release, the first track, ‘Ladies and Gentlmen We Are Floating In Space’, was a delicate paen to lost love, Pierce harmonising and singing counter-melodies to himself over the sort of backing track Brian Wilson would be proud of creating. The lyrics hint at snatches of Elvis’s ‘Can’t Help Falling In Love’ in places, but never quite get there – possibly due to copyright problems a la Verve and The Rolling Stones, where Jagger and co got 100%, (that’s 100%!) of the royalties from Bittersweet Symphony. Serves that lanky idiot Ashcroft right, after running away with Jason Pierce’s girlfriend – lyrically, that’s what the whole Ladies and Gentlemen album is about. Anyway, I digress. The new Spiritualized release doesn’t change anything, but adds the fantastic sound of a gospel choir singing ‘Can’t Help Falling In Love‘ throughout it. It. Sounds. Fantastic.

And if you thought that was good…here‘s a seperated track, featuring sparse backing and Pierce doing the whole Elvis bit himself. It’s restrained, heartbreaking and druggy as fuck in equal measures. If you were a writer dealing in puns you might say there’s methodone his madness. Anyway, you’ll also find it on disc 2 of the new release.

Sometimes in my search for interesting music to put on here, I overlook the fact that often, the original un-altered version is usually the best. So here‘s Elvis doing Can’t Help Falling In Love. The same version on every Elvis hits compilation ever released, the same one you’ve heard a gazillion times before. Recorded for the Blue Hawaii soundtrack. But you knew that already. 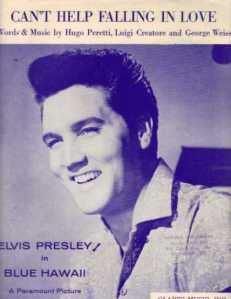 Here‘s take 4 of Guitar Man. I’ve written about it before, here. (Though the mp3 links have long been deleted by them pesky internet police.)

3 thoughts on “Ladies and Gentlemen, Elvis has re-entered the building…”