Hard to believe it’s now almost 25 years ago, but tons of bands in the mid 80s were awash with floral patterns and full of cutesy-pie hair slide-wearing, pasty-faced sensitive souls. And that was just the boys (drumroll and cymbal crash, please). Declaring their love in song for Rachel and Emily and Charlotte, they sang with such effeteness that these days, Belle and Sebastian sound like Motorhead in comparison.

It’s all Orange Juice and Postcard Records’ fault of course, but you knew that already. Taking it many, many steps too far, one of the chief perpetrators was Sarah Records, a Bristol-based label who grew out of the underground flexi-disc scene. They even released a record called ‘I’m In Love With A Girl Who Doesn’t Know I Exist’ (by Another Sunny Day). Oh happy happy joy joy. One of Sarah Records more successful acts was The Field Mice. 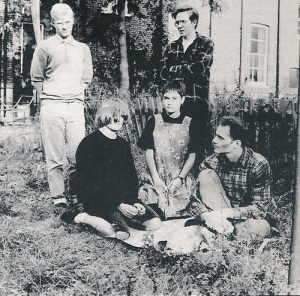 Look at them. They could’ve done with a good slap and a good shag, in any order you like. Wee, sleekit, cowrin’, timrous beasties indeed. A brief Wiki of their discography turns up these predictable song titles – Emma’s House, Sensitive, I Can See Myself Alone Forever……Thank God I was immersed in New Order and Love-era The Cult while all this was going on. They did however, turn up trumps on this. Let’s Kiss And Make Up (pur-lease!) is a six minute ode to holding hands again after falling out over who gets to read the copy of Boy Meets Girl fanzine first. Or something like that. But it’s a cracker. Aye, really! I appreciate I’ve given them as good a literary kicking as I can, but LKAMU is brilliant. Jangling (of course), swirly (of course), fey (of course), Home Counties accented singer (of course), it ticks all the correct indie pop boxes, with spots on.

It was so good Saint Etienne picked up on it and released their own version as a pre-Foxbase Alpha single. With vocals (Donna Savage, not Sarah Cracknell) that are gossamer-thin and just on the right side of tuneful, Saint Etienne’s version is aimed slightly more at the dancefloor. All beats ‘n bongos and some none-more late 80s Italo-house piano and stabbing synths, it’s dubby, clubby and a wee bit spacey.

Any excuse to show la Cracknell

Saint Etienne would no doubt love this. An irony-free pop take on their own Nothing Can Stop Us. By Kylie Minogue, released a few years before she was able to trade sans surname. I never thought I’d be posting mp3s of Kylie Minogue on here, but there you go. It’s no’ bad, actually, but not as good as the FHM (I think) inspired photoshoot below.’70s tennis girl for the Lad Mag generation. Thank you God.

9 thoughts on “We’re Lost In Muzak”