Mention Blur and most folks think of Brit Pop, very big houses in the country and all that terrible stuff, or gurning smart arse Damon Albarn, who with his side projects involving World Musicians, hip-hop and opera (hip-hopera?) is becoming the indie Sting. Me? I still like them a lot. I have all the Blur singles. From 1990’s ‘She’s So High’ on 12″ right up to 2003’s ‘Good Song’ and everything inbetween. And not everything inbetween was good. ‘Sunday Sunday’ is one cockernee oompah-pah knees up too many, and lots of their b-sides were decidedly average. But I still bought them. On 7″, 12″, CD1 and CD2. The 10th Anniversary Box Set (£10 in the Our Price sale!!!) Box Sets aside, EMI must’ve made a fortune out of me. I even bought the Japanese import stuff, which is where this post is leading. 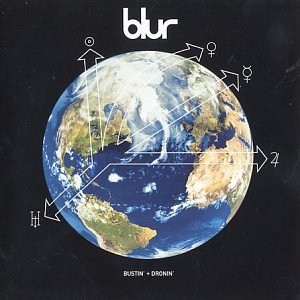 ‘Bustin & Dronin’ is a Japanese compilation that collects all the remixes, b-sides and stuff from the singles that were released off of the ‘Blur’ album from 1997. This was the album that lost the band many of their fans but it’s my favourite. It’s loud, wonky, experimental and has Graham Coxon all over it. Not that the other albums don’t have Graham Coxon all over them either, but this album is the sound of a pissed-off guitarist fed up with where the band were being pigeonholed. It spawned the catchy ‘Song 2’  (which I am led to believe is more popular these days than Sweet Child O’ Mine as the riff of choice for spotty wee boys in guitar shops) and made them massive in America. It’s said that ‘Song 2’ was influenced by the stage antics of Pavement‘s Bob Nastanovich. Anyway……

Spread over the various formats of the ‘On Your Own’ single you can find assorted Blur tracks recorded live for John Peel at Peel Acres (his house). Bustin & Dronin’ has the whole 6 song set in order and it sounds fantastic. Recorded on 8th May 1997 it’s a right royal racket of a set. It starts with a hundred mile an hour trumpet-free blast through ‘Popscene‘ and continues in wonderful fashion from there on in. It sounds nothing like the Blur that the tabloids focussed on. It sounds like nothing or no-one else to be honest. Imagine the sound of a shitty amp wired to fuzzbox being dropped down a flight of stairs along with a box of drums and a cheap keyboard. Yes, it’s that good. It’s the ideal snapshot of where Blur were at in 1997. If you saw them live around this tme you’ll know what I mean. And it’s all here below…. 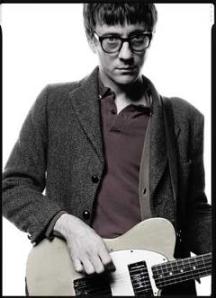 Incidently, a wee Blur fact. David Bowie and Brian Eno were given a co-writing credit for ‘M.O.R.’ Acknowledging the song’s similar melody to ‘Boys Keep Swinging’, Blur gave them credit before getting the phone call and lawyer’s letter.

Special bonus track. The frankly weird Earl Zinger reggae version of ‘Song 2Wo’. It’s hardly essential, but have a listen.

Nowadays, the guy on the left really does live in a very big house in the country. Bit of a fanny, wears tweed jackets, makes cheese. His book‘s really good. You should read it. I once saw Blur and Radiohead play the Barrowlands around the time of ‘Modern Life Is Rubbish’. Possibly 1993. Radiohead were just back from America where Creep was massive. Thom had that Birdland haircut he was fond of before he went bald. Radiohead were shite. No-one belives me when I say that, but they were. Rank rotten shite. Blur were fantastic. 40 minutes of in-your-face, no-nonsense punk pop. There were only about 150 people there. True story that.