In the early to  mid 70’s Stevie Wonder was on a bit of a creative roll. In 1972 he released not 1, but 2 albums – the underrated ‘Music Of My Mind’ and it’s more well-known follow up ‘Talking Book’. In the next 2 years he released both ‘Innervisions‘ and ‘Fullfillingness First Finale’ . He also happened to play most of the instruments himself! Stick that in yer big hat Jamiroquai. Back in ’72 he was only 22 (22!)  when he wrote and recorded ‘Superstition‘. Considered a throwaway, he gave it to Jeff Beck until his manager heard it, and seeing dollar signs between the grooves, he demanded Stevie keep it for himself. Jeff Beck was given another Wonder composition instead ‘Cause We’ve Ended As Lovers’, and the pair fell out a wee bit. Beck would eventually record and release ‘Superstition‘ a year later in 1973 on his ‘Beck Bogart & Appice’ album. I think the Eagles may have been taking notes when they were writing ‘Life In The Fast Lane’, but it’s the Stevie Wonder original on ‘Talking Book’ that does it for me every time. 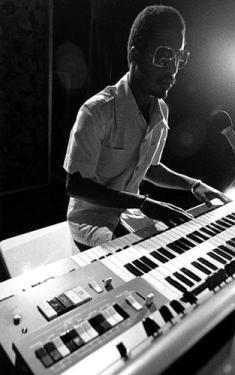 Perhaps it’s the drum beat. Perhaps it’s the clavinet. Perhaps it’s the horns. I don’t know what it is, but put them all together and it makes me dance like the rhythmically challenged West of Scotland male that I am. I love ‘Superstition’. These 16 track master tapes have been floating around the internet for a wee while now, and given the download mania that greeted the Beatles Masters, I know you’re going to love them. They’re ripe for sampling if you’re that way inclined. Me? I just like listening to the individual parts. You can hear the trumpet player taking deep breathes at one point. It’s deconstructed funkiness. Have fun – I even made a ringtone out of the wobbly clavinet part. I just called to say I love you indeed.