Three albums in, and U2 were the Bunnymen on steroids. A guitar-heavy irony-free zone, they waved their silly giant flags, planked their pixie boots firmly on their monitors and, with collar-bothering bouffants blowing gently in the stage fan-assisted breeze, set their sights firmly on world domination. Bravely, a change was required. Less bombast, more European was the brief.

Much to the horror of a label getting used to the ever-increasing ker-ching of units being sold, they parted ways with trusted producer Steve Lillywhite. Initially sounding out Conny Plank, mastermind behind much of Can and Kraftwerk’s decidedly unbombastic and very European music, the band, only after much courting, began working with ambient soundscaper Brian Eno instead. It would prove fruitful and important.

Boy 2, with tough, anthemic, post-punk guitars and a wham, bam, slam of tribal drums would not be forthcoming. Instead, between them they produced The Unforgettable Fire, a multi-layered record full of darkness and light, gossamer thin textures side by side with sledgehammer unsubtleties, pinging atmospheric guitars and fluid, flowing basslines. The drums rattled, rolled and occasionally rifled, but Eno smoothed the toughness from them through a combined use of technology, considered microphone placement and a golden touch that had first come to the fore on those early Talking Heads albums.

Take Wire, the third track in. The third track is always the important marker for an album (first track is the statement piece – ‘dig the new sound!’ and the second is usually the familiar first single. Track 3 is the deciding factor; new sound for real, or false dawn?) Wire delivers.

The Edge plays seven shades of groovy, ratttttling shit from his guitar. He ping-pongs effect-heavy harmonics across the intro, divebombs his way across the verses, pulls interesting textures and notes from the spaces where Bono shuts up for a second and scrubs and scratches his guitar throughout with a metaphorical brillo pad last heard all over Talking Heads’ Fear Of Music. It’s very much in keeping with the breathless, anthemic rush of those first few albums, but placed to break you in gently, wrapped in that woozy Eno blanket of atmospherics that would come to define the record.

If Bono isn’t exactly your thing – and no one’s judging you on that – you might like the calorie-controlled Dub version that was included with a free NME single all those years ago. I must admit to having a real soft spot for this rare-ish track on account of it following a live version of The Smiths’ What She Said on the record. U2 and The Smiths, as you know, were poles apart. You weren’t really supposed to like them both. But when laziness wins out over hipness and you fail to shift yourself from sitting position to turntable commander, you might find yourself falling increasingly for this mainly Bono-free riot of clashing guitars and out-there ’80s production. Rock, yet not rock, I played it far more often than I’d ever have admitted at the time. 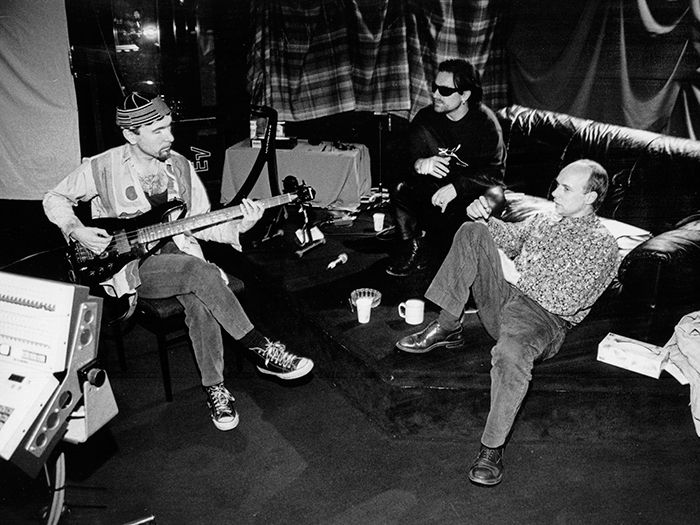 Credit must be given to a band keen to break what was fast-becoming a successful mould. Much of The Unforgettable Fire‘s sound is due to where it was recorded. Eschewing any sort of traditional studio, U2 and Eno, along with engineer Daniel Lanois relocated to Slane Castle, an 18th century stately pile in the Irish countryside and set up makeshift recording rooms in the grand ballroom and library. The ballroom provided the natural reverb ideal for the wafty atmospherics and free-flowing arty stuff. The library was the place for close-miked rock outs. Being both rockin’ and out-there, I’d imagine Wire was recorded somewhere between the two spaces, but I may well be totally wrong on that.

Great art is borne from the most challenging of circumstances, and U2’s fourth record is no exception. The castle’s power supply was driven by a water wheel which, in turn (ha) was powered by the nearby River Boyne. When the river levels dropped in the summer time, so too did the power levels. When the levels dropped sufficiently, recording was halted. As a back-up, ‘king Bono and the band turned to an ancient diesel generator that was temperamental at best. Sometimes it worked, and sometimes when it worked it would burst into flame. An unforgettable fire indeed.

My Tweets
Join 1,034 other followers