Back in 1970s Scotland there was a drink called Creamola Foam. You might remember it. It came in orange and raspberry flavours and was aimed solely at children, who up until then got their fizzy fix from stealing their dad’s mixers when he wasn’t paying attention, before adding that same mixer to a big cup of additive-heavy, wheeze-inducing orange juice. Teeth-meltingly magic and free of faff, the instructions on the Creamola Foam tin told you simply to add one level teaspoon to a cup of water, stir and drink.

Everyone ignored the instructions. Two, three, four heaped spoonfuls of the stuff went into the beaker and whoosh! A volcanic eruption of legal amphetamine right before your very eyes. It’s no coincidence that the introduction of Creamola Foam correlated with the trend for driving BMWs and Audis amongst the dental profession up and down the land. Until 1978, Mr Devine my dentist drove a beige Vauxhall Viva.

Born at the arse-end of the Creamola Foam boom, it’s unlikely that Supergrass ever found themselves hairy-face to face with a cup of the stuff (they kept their teeth nice and clean, after all), but their early recordings sound like they were bathed in gallons of it, such is the youthful effervescence of it all. You’ll know this already, but they came to mainstream attention in 1995 thanks to the Alright single and its accompanying video featuring the group Monkeeing around on a trio of Choppers, Gaz sporting a set of Victorian gentleman’s sideburns that even Neil Young might be inclined to shave off for being on the wrong side of hippy. Alright crossed the Atlantic and brought Supergrass to the attention of America, although the band had trouble explaining the “smoke a fag” line, which was somewhat lost in translation.

Those with an ear to the ground were familiar with Supergrass long before Alright began bothering the charts. Preceding single Mansize Rooster was a giddy rush of Madness barrelhouse piano, Chas Smash shouting (Roooostah!) and Nutty Boy stomp (my ability to identify it helped me win Danny Baker’s quiz on the radio one Saturday morning), and the debut album I Should Coco was a riot of 3 minute riffage from start to finish. Lenny. Lose It. Sitting Up Straight. She’s So Loose. The sweary Strange Ones. The one chord groove of Time. The astonishing punk/prog of Sofa (Of My Lethargy). All rush by with the carefree abandon you’d expect from a group with a collective age roughly an eighth of Mick Jagger, who, if I remember correctly, was about 93 at the time. If you’ve never heard the album, do yourself a favour, eh? If you have the album, do yourself a favour and stick it on again. It’s playing as I type and it still stands up.

Debut single Caught By The Fuzz was my favourite. “It’s nothing you’ve never heard before,” quoted one cynical regular in the record shop where I worked. He was right. Caught By The Fuzz is punk-pop by numbers; a Buzzcockian breakneck rush of chugging guitars, Moon-esque tumbling drums and woo-aaa-wooo! backing vocals hanging on to the coat tails of a true story confessional concerning jazz cigarettes and the over-officious Oxfordshire police.

In The Observer last year, Gaz explained that his 15 year old self was a passenger in an old Ford Fiesta with a broken headlight when he and his pals got pulled over. “I stuck the hash down my pants but I had it in a little metal tin. I was standing on the pavement, and the tin just went all the way down my trousers and landed on the pavement with a ting. The copper went, ‘What’s that, son?'” Uh-oh. A song was born. “Locked in the cell, feeling unwell…..I talked to a man, he said “It’s better to tell”…Who sold you the blow?” “Well, it was no-one I know!” Here comes my mum, she knows what I’ve done….you’ve blackened our name, you should be ashamed.”

It’s magic, in case you need to ask. It was magic then and it’s still magic now, the best part of (gulp) 20 years later. 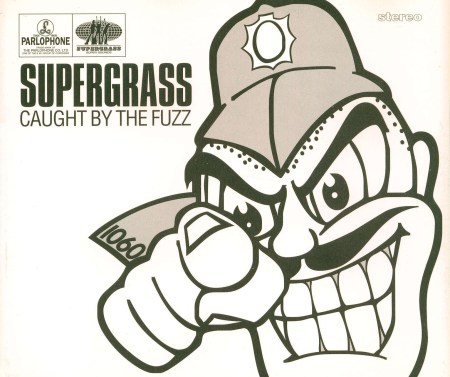 Don’t even think about downloading it!

Caught By The Fuzz comes here in a couple of versions:

The original Backbeat Records version is slightly different to the single/album version above and is rarer than a frown at a Supergrass gig. Sadly, it’s always been just out of reach. If you have a spare copy….

I Should Coco was the biggest selling debut on Parlophone since The Beatles’ Please Please Me in 1963.

Rather predictably, Hugh Grant wouldn’t give the band his permission to feature his mug shot on the sleeve of the single (he had been arrested around this time for picking up that very manly hooker in LA), but bass player Mick managed to appear on Top Of The Pops with the same image cheekily printed on his t-shirt.