It must be a generational thing, but I was surprised and just a touch disappointed at the young folk at the BBC on Wednesday night who upped and left as soon as the last languid notes of Frightened Rabbit‘s world-weary bedroom anthems had faded from the Roddy Hart-fronted Quay Sessions. Two bands with a devoted following and an impressive back catalogue, bundled together on the one radio/TV show was always going to be a good thing, and the scramble for tickets was always going to out-strip demand. I applied (“I applied!“) through the correct channels with no success, but having the right kind of friends helped me gain access to the show. The slut that I am.

They’re a good band, Frightened Rabbit, and in stripped back form – two guitar-playing pianists (or is that two piano-playing guitarists?) backed by a string quartet – they sound very good, on this occassion arguably better than the Trashcan Sinatras, the evening’s other band. A big glass room doesn’t really react well to a full band sonic assault, so sound-wise the Frabbits probably shaded things. But song-wise, there’s just no contest. It’s a shame more of the young folk in their skinny jeans and pointy boots and fuzzy faces didn’t hang about to find out.

Just like the titular Mrs H, the Trashcans make goy-jus music. Witty, literate, chiming pockets of gold wrapped in melancholy, resigned to runner-up status, forever out of step with musical fads and fashions, but stubbornly ploughing a path worth travelling. How did bands like Elbow achieve arena-type success while the Trashcans flapped and floundered around the grimier venues of the world? It’s jist no’ fair, as they say. To quote the esteemed Pete Paphides on Twitter this week – “It continues to mystify me that a band that’s made such magnificent music for so long has eluded any sort of national treasure status.” Wow. The folk that know know. I just wish more folk knew.

At the Quay Sessions, BBC Scotland’s bite-sized take on Later…with Jools Holland, the bands play in the foyer of BBC Scotland’s Glasgow studios. The window behind features the very best of Glasgow’s skyline; the stick-thin University steeple peeking out from behind the old Clydeside cranes, the Hydro, lit up tonight in greens and purples, the blue-tinted squinty bridge. It’s fantastic, and makes for an impressive backdrop.

By the time we (we being Mrs POP and myself) have negotiated the queue, we’re offered restricted viewing seats or standing. We wisely choose standing, although I get my knickers in a twist when I realise there are two stages and we’re clearly being sheperded into the right-hand side one, far away from the other side. “I bet this is the Frightened Rabbit stage,” I say, until I scan the stage like some sort of indie Columbo for any clues as to the band who’ll appear there. I spot Paul’s trusty old Tokai Strat and I can relax. 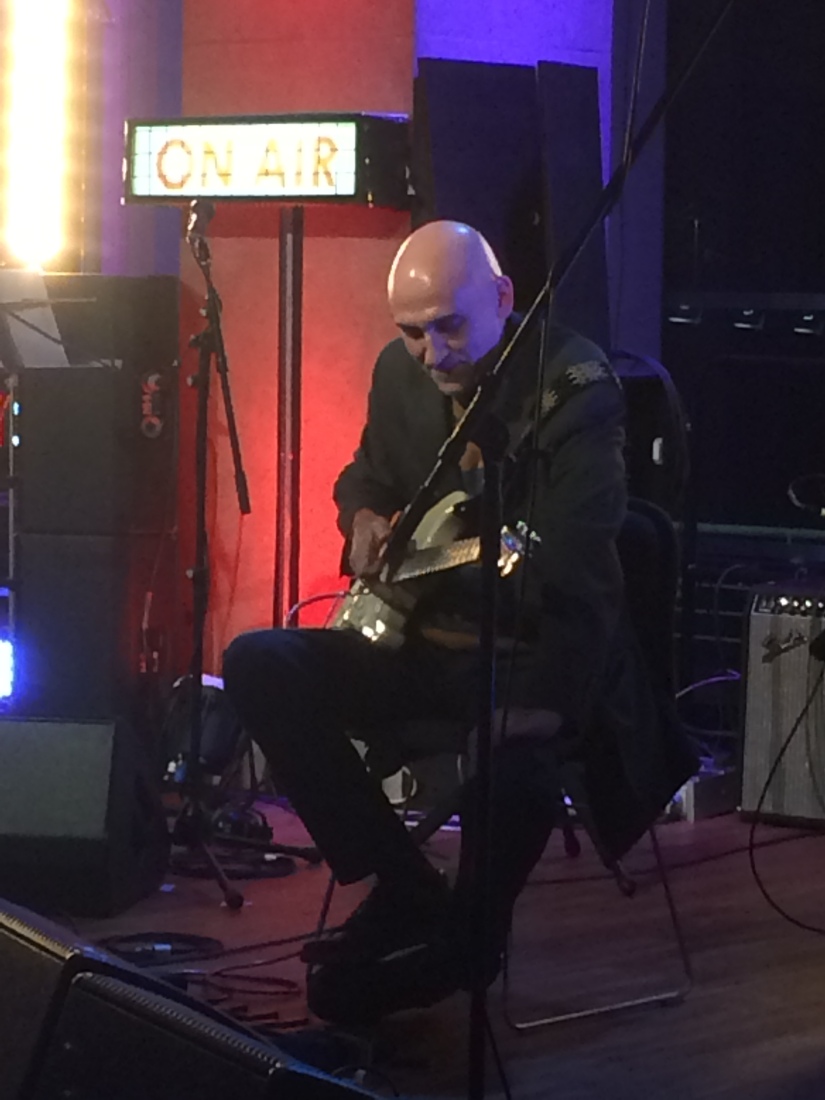 The show is recorded ‘live’ for broadcast the next night, but it’s clear from the off that the slickest thing about it is Roddy Hart’s hair. He introduces and re-introduces both bands, we whoop, holler and cheer half a dozen times, he records then re-records the links to be filled between the bands, he stumbles and fluffs his own script….and it’s all done in front of an audience. He’s a good sport, is Roddy.

As for the Trashcans, they were terrific, of course. I had fully expected them to play 3 or 4 songs at most, and all from their latest Wild Pendulum LP, but no! We got a full 50 minute set made up of half a dozen new songs and a whole load of ‘greatest hits’. Beginning with a trio of crackers – Best Days On Earth, Ain’t That Something (lyrics smartly changed to ‘At the Ga-las-gow Theatre!‘) and All The Dark Horses, which as those who know know is just about the best song ever written, the band stopped for a wee chat with Roddy, filling us in on the benefits of crowd funding, writing and recording the new album and what they’ve been doing in the 7 years since they last graced these shores.

Hayfever (watch it on the telly and you’ll see the missus and I gurning daftly at the camera after it clatters to a close) kicks off part 2 of the show in fine form. By now the band are in full flow and the hits and future hits keep a-comin’ – Got Carried Away, I’ve Seen Everything, All Night (with additional brass from the real frightened rabbits of the night – 2 self-consciously awkward trumpet players frozen at the sight of the TV cameras, poor lads) and a light and airy Weightlifting to finish.

Although we’re right at the front, we are often faced with the BBC camerman’s backside as he swoops up and down and zooms into the photogenic Franks (Reader and Keanu Reeves-lookalike bass player Divanna). We are encouraged by Roddy at the start to video, picture, Tweet and Facebook the show, so at times I find myself watching the gig not only through the screen on my phone but also through the screen on the camerman’s monitor. Watching a gig through a screen through a screen? How very post-modern!

As is often the case when they’re in town, the Trashcans are joined by John’s wife, Frank’s sister Eddi. Usually they’d duet on the scrubbed acoustic fug of Send For Henny (from 1993’s I’ve Seen Everything album), but tonight she takes the female lead on What’s Inside The Box, one of Wild Pendulum’s stand-out tracks. It’s a taster for what’s to come at Oran Mor the next night, where they kick off their short 3 date tour.

It was a privilege to be in the BBC audience. Despite the gaps in recording and touring, the Trashcans are by far the band I’ve seen more than any other and since the end of the 80s I’ve seen them in all manner of venues and situations but never in this kind of environment. The next night at Oran Mor was more straightforward, but no less thrilling.

A rammed venue and a crowd who knows every song and greets the oldies with Hampden-sized cheers makes for a good gig. The band didn’t disappoint, playing with a ferocity and passion not seen in years. Iffy sound problems marred the first couple of songs but once they sorted themselves out, the show really started to fly. Broadcaster and local Mr Music, Billy Sloan, a long-time champion of the band was ecstatic in his praise afterwards, saying it was the best he’d ever seen them, and while I suspect he probably says this after every time he’s seen them, he might’ve been right.

The setlist was perfect; the correct ratio of old:new and fast:slow. A quick chat with the band later on revealed the difficulties in producing such a setlist. I could write you a brilliant 20-song set lof material the Trashcans didn’t play, but there’s the rub. So many songs, so little time. If you’re off to Dublin today (12th) or London on Monday, you’re in for a great night out. 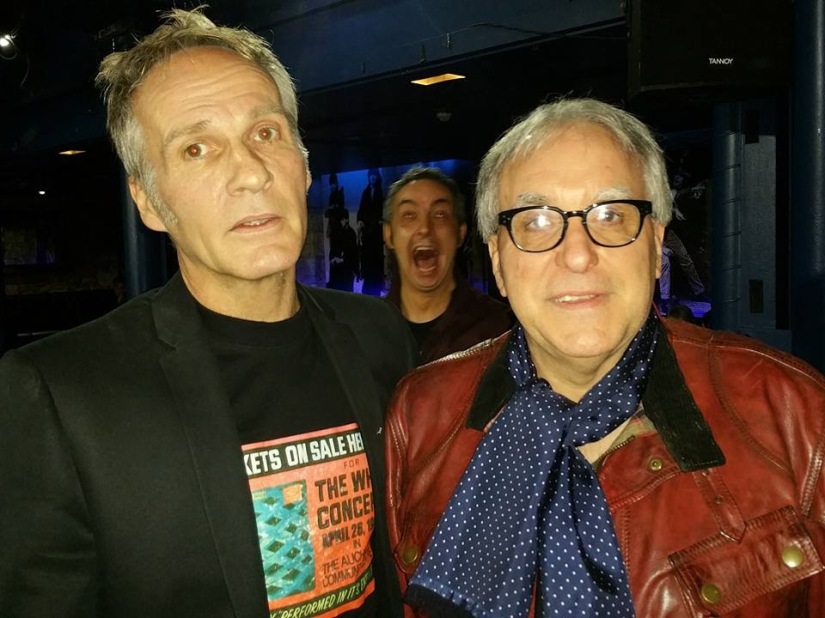