Of all the bands that followed in the slipstream created by the Sex Pistols’ sonic boom, one of the most interesting is Wire.

Where the Pistols raged with a stomping glam rock fury and The Clash spat socio-political lyrics ten to the dozen, Wire were simpler. There’s no meat on their records, nothing that doesn’t need to be there. They’re packed full of lean, mean, short, sharp shocks. Rhythm and counter-rhythm live easily beside one another. Chunky, concrete block riffs drop in and out to allow vocals, backing vocals and chanted slogans the space to breath. Solos are kept to an absolute bare minimum.

No songs outstay their welcome, either. Much of the material on debut album ‘Pink Flag‘ is over before it’s barely begun. ‘Field Day For The Sundays‘ lasts barely half a minute before it’s gone. ‘Three Girl Rhumba‘ pushes the boat out to 1 min 20 seconds. At 2 mins 37 secs, debut single ‘Mannequin‘ is a prog-bothering epic in comparison.

Had I first heard ‘Pink Flag‘ on LP rather than CD, I’d’ve been up and out my chair like Sur Alex chasing a flag-happy linesman to check there was nothing wrong with my record. And, just for the, er, record, no ma’am, there ain’t nothing wrong with the record. It’s a fantastic example of art/punk. Songs start. Then stop. New ones start again. Then stop abruptly. Tracks run into one another, all delivered in accents last heard when Gripper Stebson was terrorising Tucker Jenkins in Grange Hill. “Is this still the same song?” “I dunno!” you’ll answer yourself. By the time you’ve worked it out, the band are onto their next song.

‘From A to B, again avoiding C, D and E. Cos E is where you play the bloooooze.’

There’s yer Wire manifesto right there. Two chords and the truth. Discipline. That’s what Low Down is. How many other bands could’ve resisted sticking a one note feedbacking ‘whuuuuuooooo‘ in the middle of it? Not Wire. Instead, they stick a great, echoing chord over it for a few bars. Keen ears will spot that it’s not a million miles away from that big clanging one in the breakdown of Primal Scream’s Loaded. Brutal and minimalist. Over and out.

How many other bands can claim a debut album that boasts 21 songs? By the time reissues were an accepted part and parcel of the music industry, the track listing on ‘Pink Flag‘had multiplied to an eye-watering, ear-saturating 38 tracks, including non-album singles and Peel Sessions. 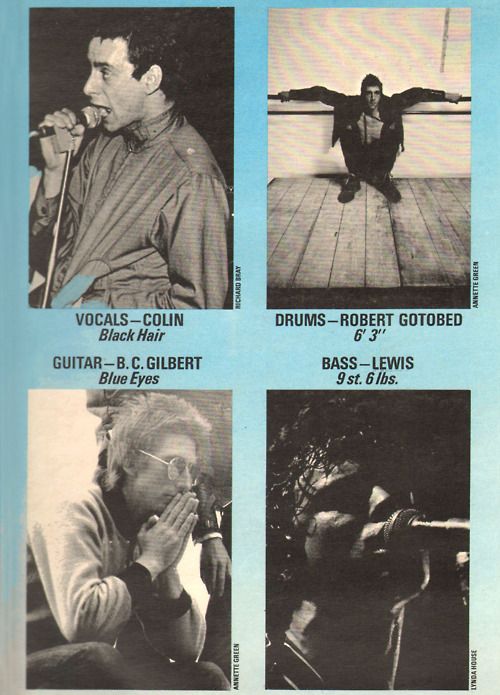 Famously, Elastica stole great chunks of their most well-known tracks – I Am The Fly and Three Girl Rhumba – which I’ve written about before, here. A quick listen to Wire will make you appreciate where many other 90s and 00s bands were coming from. I’m sure the Holy Bible-era Manics were not unfamiliar with Wire’s uncompromising sound. Franz Ferdinand and The Cribs too. Graham Coxon scuffed the edges of Blur’s most abrasive tracks, not to mention much of his own solo recordings, with steroidal Wire-like riffage. Even the Lord God of Indie Guitar, Johnny Marr, has heard their angular twang and thought, “I’m borrowing some of that.” A quick listen to his more recent solo stuff will qualify that, not so much in sound but in lip curled, Fender-toting, noo wave attitoode.

The anglophile Peter Buck dug Wire so much he persuaded REM to cover Pink Flag‘s Strange on breakthrough album Document. It’s a great version too.

Pink Flag by Wire. Everyone should have this album. It may be forty years old this year, but it’s never too late to get on board.

Somehow, some way, Plain Or Pan has turned 9. Or, to be more accurate, is just about to turn 9. But at this time of year, when you can never be entirely sure if it’s Sunday morning or Thursday night and inspiration goes out the window along with routine and work ethic, it’s tradition that I fill the gap between Christmas and Hogmany with a potted ‘Best Of‘ the year compilation, so I’ve always made this period in time the unofficial birthday for the blog.

Not that anyone but myself should care really; blogs come and go with alarming regularity and I’ve steadfastly refused to move with the times (no new acts here, no cutting edge hep cats who’ll be tomorrow’s chip paper, just tried ‘n tested old stuff that you may or may not have heard before – Outdated Music For Outdated People, as the tagline goes.) But it’s something of a personal achievement that I continue to fire my wee articles of trivia and metaphorical mirth out into the ether, and even more remarkable that people from all corners of the globe take the time out to visit the blog and read them. From the bottom of my heart, I thank you, one and all.

Since starting Plain Or Pan in January 2007, the articles have become less frequent but more wordy – I may have fired out a million alliterative paragraphs in the first year, whereas nowadays I have less time to write stuff and when I do, it takes me three times as long to write it. To use an analogy, I used to be The Ramones, (1! 2! 3! 4! Go!) but I’ve gradually turned into Radiohead; (Hmmm, ehmm, scratch my arse…) Without intending it, there are longer gaps between ‘albums’ and I’ve become more serious about my ‘art’. Maybe it’s time to get back to writing the short, sharp stuff again. Maybe I’ll find the time. Probably I won’t.

The past 9 years have allowed me the chance to interview people who I never would’ve got close to without the flimsy excuse that I was writing a blog that attracted in excess of 1000 visitors a day (at one time it was, but I suspect Google’s analytics may well have been a bit iffy.) Nowadays, it’s nowhere near that, but I still enthusiastically trot out the same old line when trying to land a big name to feature. Through Plain Or Pan I’ve met (physically, electronically or both) all manner of interesting musical and literary favourites; Sandie Shaw, Johnny Marr, Ian Rankin, Gerry Love, the odd Super Furry Animal. Quite amazing when I stop to think about it. You should see the list of those who’ve said they’ll contribute then haven’t. I won’t name them, but there are one or two who would’ve made great Six Of the Best articles. I’m not Mojo, though, so what can I expect?

A quick trawl through my own analytics spat out the Top 24 downloaded/played tracks on the blog this year, two for each month:

See you in the new year. First up, Rufus Wainwright. Cheers!