The Beta Band will forever be defined by Dry The Rain, the first track on their first EP that most-famously soundtracks one of the most memorable scenes in High Fidelity. That EP, Champion Versions, introduced the band’s music at a time when dumbed-down indie rock was ubiquitous, predictable and in need of a good kick square in the haw maws. The big bang of Brit Pop had long-since fizzled to a watery fart and the Big Two led the lethargic charge towards mediocrity and meaningless. Oasis was a bloated beast, cocksure with misplaced arrogance merely by being super-popular. Their music, once a glorious melding of rabid snarl and Mersey melodies – the Sex Beatles, if y’will, was now bloated, irrelevant and plain old rubbish. Blur was midway to nowhere, somewhere between slumbering, opiate-enhanced recording sessions and making cheese whilst living in actual very big houses in the country. Others limped on to ever decreasing returns; Supergrass, Gene and Elastica, for example, who’d eventually disappear down the same black hole that had claimed Marion, Menswear and Mansun before them (although some would find their way back out now and again for one last hurrah. Watch Supergrass go in 2020.)

In 1997, music was ripe for interesting change. Radiohead led the way and The Beta Band followed close behind. Dry The Rain may well be the band’s signature tune, but it’s their second EP, The Patty Patty Sound, that does it for me. Across the four tracks that constitute The Patty Patty Sound you’ll find enough weird ‘n wonky, dubbed out, clubbed up soundscapes to sate your more out-there moods. With knowing nods towards aural sculptors Can, the greats of dub reggae, the rhythms of the Stone Roses and the folky introspection of John Martyn, it’s quite something. Given its time and place, the EP really was the in-sound from way out.

It’s the opener that does it for me.

Inner Meet Me is a solid piece of sampled and looped acoustic beat music, a cut ‘n paste sonic collage of odds ‘n sods ‘n found sounds designed to astonish and astound. It begins simply enough, with some electric bleepery and studio static before a repeating vocal plays just behind the sound of a lone pigeon cooing its way into the mix. As you might know, The Beta Band was originally going to be called The Pigeons, and after a year or so, founding member Gordon Anderson left the band soon after they relocated to London and began recording as Lone Pigeon. In a nod to their early roots, the pigeon sample is something of a band in-joke.

When it really gets going, Inner Meet Me positively swings. Acoustic guitars are played throughout with the same sort of focused gusto normally reserved for the poor soul whose job it is is to work a Brillo pad into burnt-on mince in a two day old pot. As the chord changes, the song moves into gear. The drums kick in, accompanied by percussive shakers and what sounds like a decent set of Le Creuset pots and pans being clattered on the off-beat. As you settle into it, arcade machine electro bloops and whooshes colour the mix, a reminder that Beta Band are forward-thinking retro revisionists. No-one else was doing this kinda thing in 1998 and 20-odd years later, I still think it/they sound brand new.

The EP continues with two epic sound collages – the self-descriptive House Song that, once it’s going, kicks like a mule, carried by a really great bassline and sounding like DIY lo-fi indie house, and The Monolith, a near-16 minute folktronica jam that incorporates backwards samples from their own Dry The Rain, African chanting, chiming, cascading, waterfalling guitars and plenty of birdsong. It’s not Be Here Now, that’s for sure.

Beta Band – She’s The One 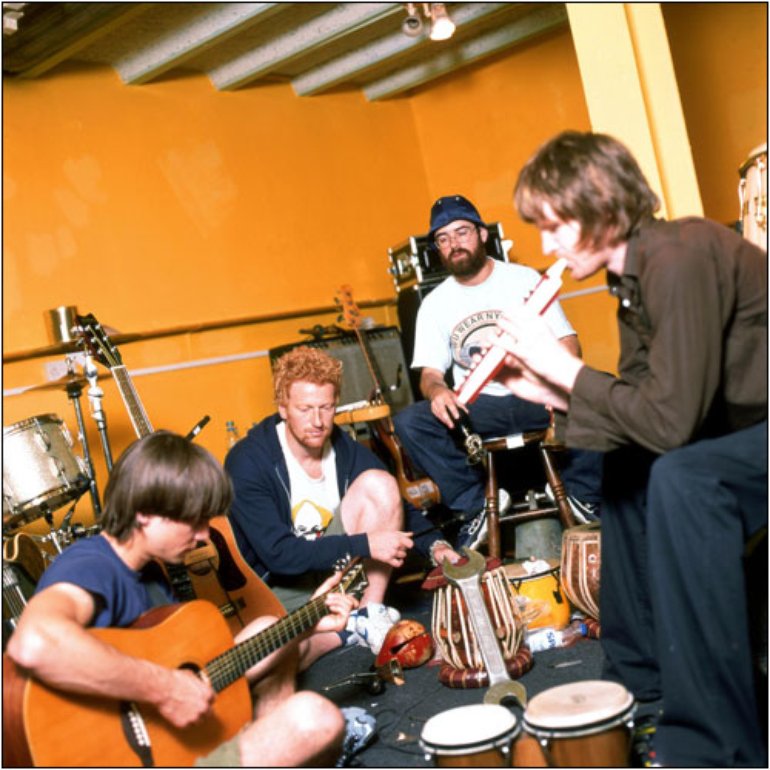 Closer She’s The One is closest in sound and spirit to the opener. A scrubbed acoustic jam replete with random bursts of noise and a twangin’ Jews’ harp, it’s indie hoedown relocated from a creaky porch in the deep south to a cramped St Andrews student flat. It’s all about the layers and the rhythms. Vocals and vocals, multitracked to the max create a circular, hypnotic groove, ever propulsive, ever moving forward.

Their next EP, Los Amigos Del Beta Banditos featured more of the same, a document of a peerless band ahead of their time, out of their minds and out of this world. It’s The Patty Patty Sound though that marks The Beta Band as more than just the ‘Dry the Rain‘ band.