Two Sevens Clash by Culture is, to me, ubiquitous with the John Peel show. I’m probably distorting fact with reality through the wonky prism of time, but I’m sure he played it regularly throughout the mid ’80s. Entry-level reggae, if you like, for roots ‘n radicals explorers wanting to dig deeper than Bob Marley, Two Sevens Clash is everything that’s great about the genre; it’s cavernous, it features a head-nodding groove and it’s sweet ‘n soulful. You knew that already though.

Before they went by the one word moniker, Culture were known as The Cultures and cut Trod On. Released in 1977, Trod On foreshadows the constituent parts that made Two Sevens Clash such a great record at the end of the same year.

The Cultures – Trod On 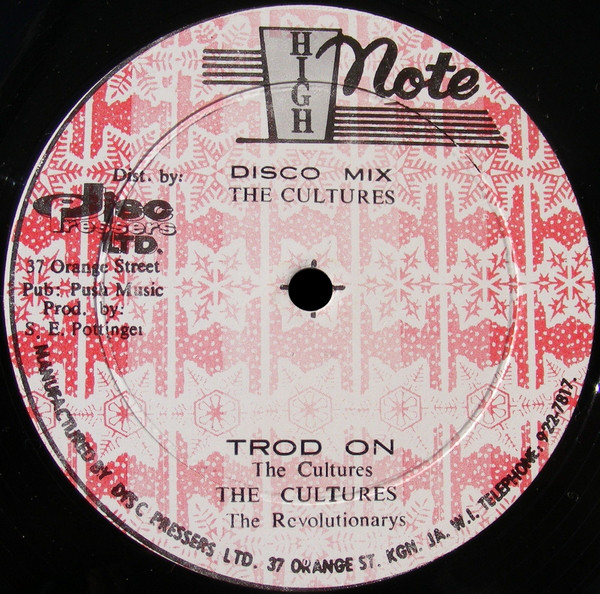 It features a steady Eddie one-and-two-and-three-and-four rhythm, all concrete bass and chicka-chicka offbeat guitar, a toasting singer (Ranking Trevor) backed by some lovely falsetto vocals (that’ll be The Revolutionarys, you’d have to think) and a horn refrain that carries the whole track from beginning to end. With its ricocheting rim shots and vapour trailing vocal-ocal-ocals, the extended version above nicely skirts the outer limits of dub. It’s a great wee record.

As happenstance and kismet would have it, Trod On‘s earthy groove found its way east to 185 West Princes Street, Glasgow. Or to be more precise, it found its way east to the ears of Orange Juice, resident happening band at Postcard Records, the label that championed the sound of young Scotland and whose maverick supremo Alan Horne resided in the 2nd floor flat at that very address.

Orange Juice had barely learned to walk when they stumbled upon (trod on?) Trod On. In need of a flip side to accompany the frantic knee tremble of their debut single Falling And Laughing, the band set about deconstructing The Cultures’ mid-paced groover and appropriated the horn refrain to their own ends. 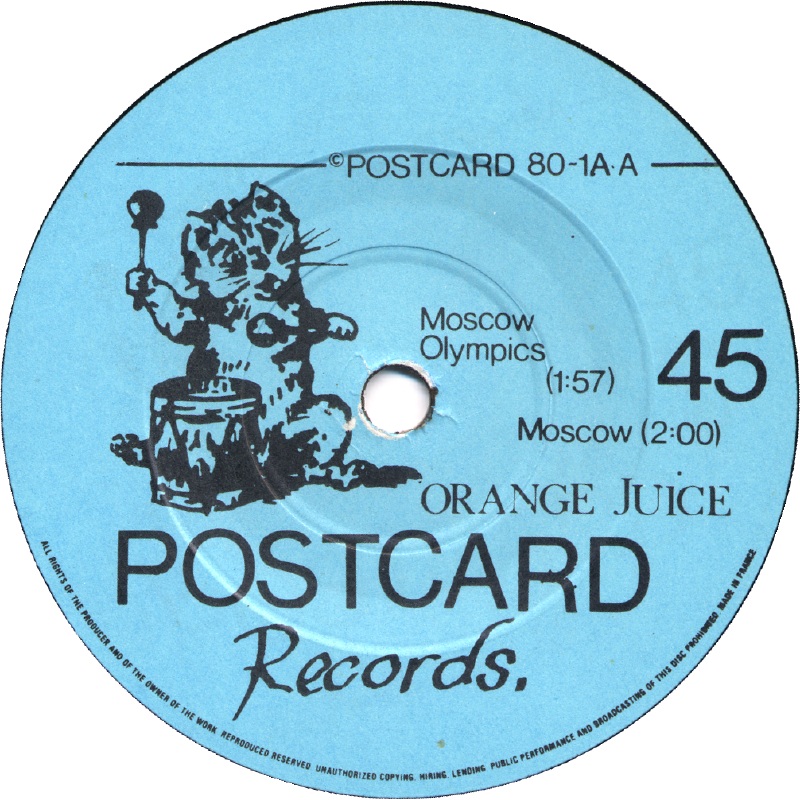 Like all early Orange Juice tracks, when the band was still learning how to play together, and doing so in full view of the listener, Moscow Olympics fairly gallops along on a rickety bed of enthusiasm and wide-eyed self belief.

Amazingly/inspiringly, it sounds no different to the dozens of rehearsal room tapes that were recorded down the years in the bands I played in; ghetto blaster facing the wall and ‘record’ depressed in the hope it might magnetise some of the magic swirling in the air (sometimes it even did) but if you are able to focus between the the gaps in the scratchy ‘production’ and the faraway racket of drums (played somewhere near Sauchiehall Street while the other three apparently thrash it out over on Argyle Street), you’ll hear that Davy McClymont’s bass line on this recording is fantastic, a proper tune within a tune. The horn-aping guitar line is supremely confident too, never out of time or tune, and with nary a bum note to be heard.

The boys are on fine form, with drummer Daly and svengali Horne (Alan Wild, indeed) enthusiastically barking, yelping and football-chanting ‘Moscow!‘ at all appropriate points. It might only be the b-side of their first single, but despite the knees-out-the-new-school-trousers approach, the shambolic seeds of something special are being sown right before your very eyes and ears. It’s there in the interweaving guitar interplay and disco hi-hats; cheeky and Chic-y.

Being Orange Juice of course; arch, wry and post-punk rule breakers, they stuck two versions of the track on the b-side. Just for good measure. Because they could. And why not?

I’ll admit it. The Olympics have got me hook, line and sinker. From the opening ceremony onwards, via Wiggins’ magical time trial ride and the Scottish fella Jamieson who very nearly gubbed them all in the 200m breast stroke, until this weekend when Team GB have been picking up gold medals with all the carefree ease of Gladys and Agnes on a Tuesday morning at the pick ‘m mix in Woolies, I’ve sat, shouting sweary words of encouragement from the comfort of my sofa to people I had no idea existed a week ago. I was as cynical as many up here. Greatest Show On Earth? I don’t think so, pal. The Greatest Show On Earth is the World Cup. Everyone knows that. In no small part, my cynicism was due to Stuart Pearce’s (cough) Team GB football squad selection. A squad made up of numerous young Englishmen and a smattering of token Welshmen, with nary a Scot or Northern Irishman in sight. But more about them later. Yesterday was the opening game of the season for my team, Kilmarnock. It was a decent enough game, end-to-end, even, even if the BBC reported otherwise (their usual reporters have probably been deployed around the East End of London, I’d wager, and they’d been using some junior hack or other, not yet acquainted with the football normally played in the top league) yet I found my mind drifting back to events down south and couldn’t wait until half time in order to check the @TeamGB Twitter feed to see what I’d been missing. Good! My girl Jessicarennis was still burning the competition in the Women’s heptathlon. 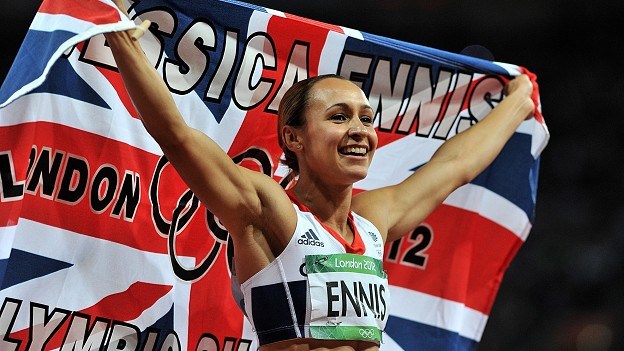 It wasn’t long until I was home and catching up properly. Saturday night’s telly was sensational. But you knew that already. If you were watching ITV, silly you. If you were out, silly you. If, like me you whooped, hollered and punched the couch and the air and your wife with joyful abandon, you’ll know just how thrilling it was. When Jessicarennis lead from the front and came back strong and determined around that final bend; When the far-too-full-of-himself long jumper who’s name I’ve forgotten already messed up his last jump and bowed theatrically to the stadium; When Mo Farah, looking like someone Bob Geldof might be inclined to start an appeal for kicked his heels and dug out the strength to carry himself to victory; It was clear – that most dreaded of things, a feel good factor was suddenly everywhere. A ginger, a Muslim and a women of mixed race go into a pub. Everyone buys them a drink. I stole that from Richard Bacon. It’s a good one, eh?

Here in Scotland, following the manner in which oor ain Andy Murray casually disposed of Roger ‘The Greatest Ever‘ Federer, that feel good factor was multiplied ten-fold. Down south, people had a problem with Andy. He didn’t smile. He was dour in interviews. He battered his racquet around the court when things weren’t going his way. Good old stiff upper lip Tiger Tim Henman would never have displayed such vulgarities. Then, a month ago, the boy Murray blubbered like a big baby on the Centre Court and, well, some kind of thaw took place. It seems the public at large took him to heart. Today, when he climbed down from the Players’ Guests box and onto the scoreboard that declared his greatest ever victory, the wee boy who pushed his way to the front and shouted Andy back for a hug showed just how that feel good factor affects us all. That hug, as well as physical, was a metaphorical hug from all of Britain (but especially Scotland) to our own man. 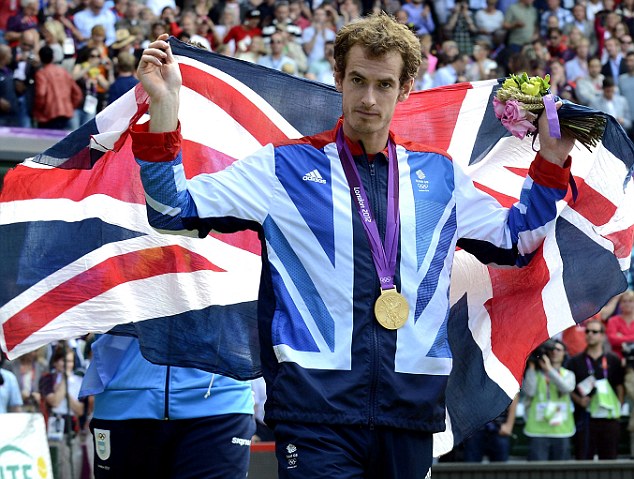 The coverage on the BBC has been exceptional. This is what you pay your licence fee for. Handball over breakfast? Don’t mind if I do! Beach Volley ball at 10 in the morning? Oh aye! Easy on the eye! Beach Volleyball at 10 in the evening? Oh aye! Easy on the…but..hang on…they’re all wrapped up in, like, long lycra and jumpers and stuff. Damn that cold wind and British ‘summer’. Every sport is catered for and it’s all wrapped up and repeated if you happen to miss it first time round. One wee gripe? The commentators. Excellent and knowledgeable they undoubtedly are, they can also display an ignorance that cuts deep. It was that jumped up kids presenter Jake Humphries who did it first, during Team GB’s first women’s football match. “England this…England that….England the next thing“, and that’s a team that did have players from nations other than England in the starting 11. He said it about a dozen times. Then the normally reliable, likeable Lineker last night, “Well. So often before. And we’ve done it again. Out on penalties.” We, Gary? We? This is the first time we’ve ever entered a Team GB into any competition. We? You couldn’t possibly be referring to England, could we? The England who’s bottle crashes spectacularly at the merest whiff of a penalty shoot out? Did you not notice token Welshman and over-age player Ryan Giggs scoring there? Tut tut tut.  I’ll admit it, that’s why I took a tiny wee bit of satisfaction in seeing (cough) Team GB crash out of the football. 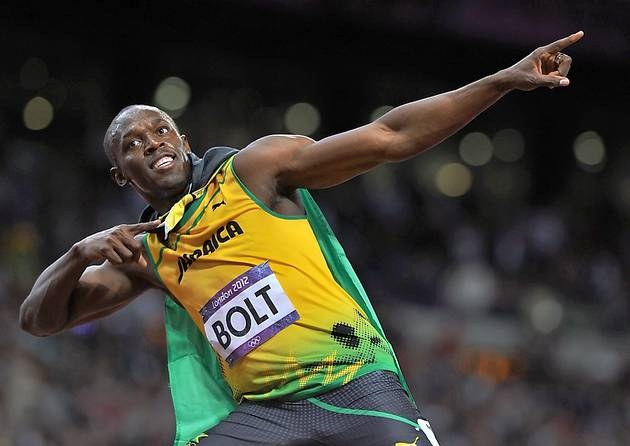 Anyway. This is supposed to be a music blog. The aptly-named Usain Bolt was pretty terrific in the 100m semi-final. The fastest man on Earth practically jogged over the line once he knew he’d qualified. Then the BBC ramped it up somewhat, with clocks counting down until the final itself. Re-runs of races from all angles. Slo-mo shots of Bolt goofing off to camera. And a 2 minute mini movie of the Best of Bolt for the majority of viewers who somehow knew that Bolt was The Man, yet were oblivious to his achievements to date. All sound-tracked by this. Lightning Bolt by Jake Bugg. One of my favourite singles of the year, it sounds like Bringing It All Back Home-era Dylan rattling his way through Bad Moon Rising, all nasal vocals and cow punk skiffle guitar. Like Bolt in the 100m final, it’s supremely self-assured, a blur, over before it’s begun, leaving the rest in its wake. Get it quick – I’ve a feeling the internet police won’t like it. But you will.