There’s a great little authentic soul scene bubbling just under the surface, a handful of artists who’ve strode proudly in on the back of Michael Kiwanuka’s door-opening wide lapels and wormed their way into the more discerning listeners’ ear space thanks to their abilities to take the best of those late ’60s/ early ’70s soul pioneers (Stevie, Curtis, Marvin) and re-present them as shiny new things, played and produced with effortless majesty. At the forefront are the excellent Black Pumas, previously featured here, along with the also-featured Curtis Harding and Leon Bridges. 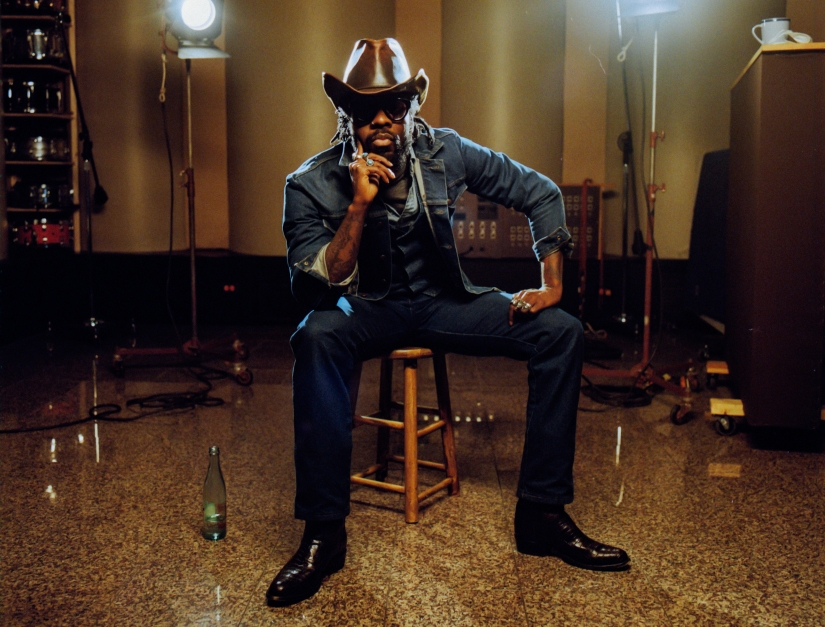 The newest cool chops on the block belong to Boulevards, the name by which North Carolina’s Jamil Rashad preferes to go by. He’s not new to this. Bandcamp throws up some self-released tracks that are a good five years old, but in the interim he’s thankfully thrown off the questionable and gadsy Kravitzesque approach to what constitutes ‘retro’ and reimagined himself as a pimped up, cooled out Blaxploitation soundtracker.

His fourth album – Electric Cowboy: Born In Carolina Mud, due out in February ’22 will perhaps be one of the early go-to albums of next year. If you like the references above, I think you will, as Shaft was wont to say, dig it.

Better Off Dead floats in on a lush tapestry of whacked-out wah wah and paranoid orchestration, pistol crack snare and movie-esque synths. Boulevards takes the first verse – sumthin’s wrong wit’ me, I can’t barely breathe – singing the tale of the after-effects of a week-long bender and, just as you’re falling into hungover step with him, guest vocalist (New West labelmate) Nikki Lane eases her way in on a shimmer of silver strings to tell her side of the story – noses start to bleed…when can I take a seat?…I need a hit you see…tell me I’m alive… It’s Lee ‘n Nancy ‘n Isobel ‘n Mark for the strung-out post-millenials in your life and it’s utterly fantastic.

Those chords are great; luscious and creamy major 7ths with just the right amount of echo and reverb, and when they make way for the slow burning solo, it’s exactly what you were wishing for; a string bent, multi-phased, morphine-dripping long-lost cousin of the Isleys’ That Lady. You can practically see the technicolour flow from the speakers as it floods the room. Reading the credits alongside the press release here, it would appear that it’s the work of Black Pumas’ talented Fender bender Adrain Quesada, a neat way of squaring the circle, of passing the baton on to the latest trailblazers in the soul underground.

Fill yr Boulevards boots at New West Records here. You should also take the time to investigate Nikki Lane. A bit country, a bit Southern Soul, she is, apparently, the real deal.