Crowded House‘s Into Temptation is a slow shuffling, McCartney-esque cheatin’ song, all minor chords and lilting vocals that carry the heavy weight of a clandestine world.

It’s a terrific wee song, played, like its subject matter, with a hesitant and delicate touch, necessary for allowing the melody to tip-toe in the gaps in between.

“The guilty get no sleep in the last slow hours of morning,” offers Neil Finn, as the creeping chord progression ascends in the way a guilty party might sneak back up the stairs in the wee hours.

“As I turn to go, you looked at me for half a second

With an open invitation for me to go into temptation.”

Wow. There’s no denying what the song’s about, a 4 minute wonder that was inspired after a knock on Finn’s hotel room door one night. Staying there in the middle of a Crowded House tour, Finn had noticed a men’s rugby team and a women’s volleyball team were also residents. On opening, he realised the knock had been on the door of the room next to his and he caught a quick glimpse of a female volleyball player going (into temptation) into the room of the rugby player who was staying there. What goes on on tour stays on tour ‘n all that…. 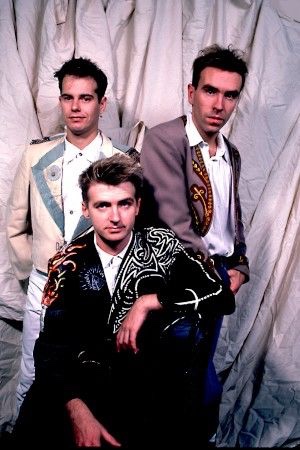 A fairly insignificant track from the band’s second album, Into Temptation benefits from being on Crowded House’s Best Of compilation, Recurring Dream where it remains as a slow-burning standout on an album packed full of great songs. Anyone with a liking for guitar based melodic pop should look no further. Never particularly hip or happening (never mind the AOR leanings of the music, they could’ve done with a decent barber and tailor), Crowded House nonetheless endure, a more straight-laced Go Betweens for folk who’ve never heard the Go Betweens, a safer bet than the edgier Del Amitri. It’s hip to be square, as someone once sang.

Like all the best Neil Finn compositions, Into Temptation features a brilliantly technicoloured chiming bridge where ringing arpeggiated guitars sparkle and the melody soars before returning once again to the unmentionable matter in hand. As far as songs of unfaithfulness go, it’s second only to James Carr’s Dark End Of The Street, another post for another day, for sure.