Watching Glastonbury from the comfort of my armchair, one band stuck out like a sore thumb. But a good sore thumb. A really good sore thumb. Springsteen? Hmmm. Sure, he’s got the knack of making a hundred thousand people feel like he’s serenading them on a one-to-one basis in the dressing room of King Tuts. Neil Young? Hmmm, yeah, but he does go on a wee bit too long. Just a tiny bit, but a wee bit nonetheless. Long may you run and all that, but c’mon Neil. Blur? Punkpoppogoagogo. Damon All Bran shadow boxing and jogging on the spot. Graham Coxon rolling around on the floor whilst soloing. Yeah, it’s all very 1992. I liked them a lot. But nope. The band that really did it for me were Status Quo. Yep. You read that right first time. Status Quo.

If only for their opening 5 minute salvo, I’d have been delighted to stand in a crowded field full of B.O. and pollen. Had I been there, my fingers would’ve been firmly in my belt loops and I’d’ve been heabanging away like some of those hopelessly embarrasing bald-on-top, long at the back tour t-shirt-wearing accountants-by-day oldies. Status Quo’s opening song sounded so good, I thought it was 1973 again. There’s a slow build up of feedback that Kevin Shield’s would’ve been proud of. Parfitt’s fingers are barred and poised to start chugging out the F-Shape at the 13th fret. As he finds the rhythm and locks the groove, Rossi fades himself in with that instantly recognisable counter riff on his green Tele. The rest of the band get on with the no-nonsense heads-down boogie and we’re off. Come on Sweet Caroline! Take my hand, together we can rock and roll! As that other rock ‘n roller who clearly stole Parfitt n’ Rossi’s patented denim-with-white-trainers look might say, Sen. Say. Shee. Oh. Nal. Aye Liam. You’ve been out rocked and out rolled by a couple of old men in waistcoats and bad hair.

Of course, twas not always thus. Sure, they’ve mostly always had bad hair and often had a penchant for sporting the garishly coloured waistcoat, but back in the 60s, Status Quo were fresh from the Butlins holiday camp circuit and had a ‘The’ at the start of their name. If you’ve ever seen Spinal Tap (and of course you have) The Status Quo were a psychedelic beat combo in much the same vein as that film’s The Thamesmen. Paisley shirts? Check! Wah-wah? Oh yes! Multi-coloured guitars? Absolutely man!

The Status Quo are amazing. They’re probably best known for Pictures of Matchstick Men, covered by many including most recently Kasabian for a Radio 2 session with Dermot O’Leary. Christ. I hate that band. They’d love to be Primal Scream, wouldn’t they? Anyway, back to The Status Quo. Not ‘The Quo’. That means ‘In The Army Now’ and best-forgotten collaborations with Manchester United. The Status Quo. Ice In The Sun. Another slice of 60s psychedelia. A coupla years later and they’d be slaves to the boogie. Here‘s their version of The Doors ‘Roadhouse Blues’. Guilty as charged, m’lud. For years I never knew this was a cover. When I was 10 I got ‘From the Makers Of…‘ a triple LP Status Quo Box Set from Santa. It’s still in my collection, as is  ‘Picturesque Matchstickabale Memories From The Status Quo’. If you only buy one Status Quo album this year, etc etc….You’ll not find it in Tesco but it’s worth seeking out. 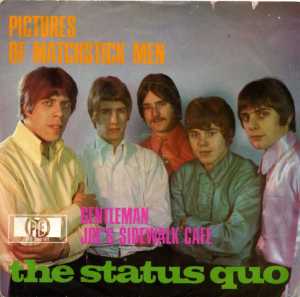