A lone, mournful mariachi plays out the last fading notes of a late night lament and gives way to an elastic band fretless bassline that slurs its way throughout the opening bars, the half-cut twin brother of any of those bending, wandering basslines from Tom Waits’ Nighthawks At The Diner. A Mancini Moon River harmonica ghosts between a vocal that’s up-front and centre-stage and singing guilty thoughts about infidelity and hard drugs. Nylon-stringed guitars scrub out a rhythm straight outta Brazil 1970 as the percussion plays on the off-beat; an itchy, scratchy güiro maybe, some congas perhaps, some metallic tingaling thing or other, slow and steady and as bossanova-tastic as the percussion function on an old Bontempi, but played for real by a group of super-talented musos with not only a keen ear for detail but the ability to execute it exactly.

In their promo pictures they may have masqueraded as happy-go-lucky Haight-Ashbury hippies; in reality Jellyfish put just as much (and even more) effort into the finer details of their music as they did with their day-glo clothes and cartoon schtick.

You might be surprised to know they had less than little time for one another. Recording sessions were seemingly a non-stop round of arguments between singing, standing drummer Andy Sturmer and principal songwriter Roger Manning. That they created one terrific album, let alone two, is nothing short of amazing. The perfect amalgamation of Beatlish melancholy with XTC wonkiness and the Finn brothers’ ear for an unravelling melodic hook, Jellyfish on Bellybutton were especially great.

Bedspring Kiss, that track at the top, is sequenced in third-last place on its parent album. The worst place for a song to be perhaps, it’s often the track you brush over in your impatient haste to get to the big closers at the finish line  – Baby’s Coming Back and Calling Sarah in this case, multi-layered stacks of kaleidoscopic harmonies, handclaps and ringing, stinging guitars that reveal new things yet, thirty years later – but just for once, focus your attention on Bedspring Kiss and headswim in its depth and substance. 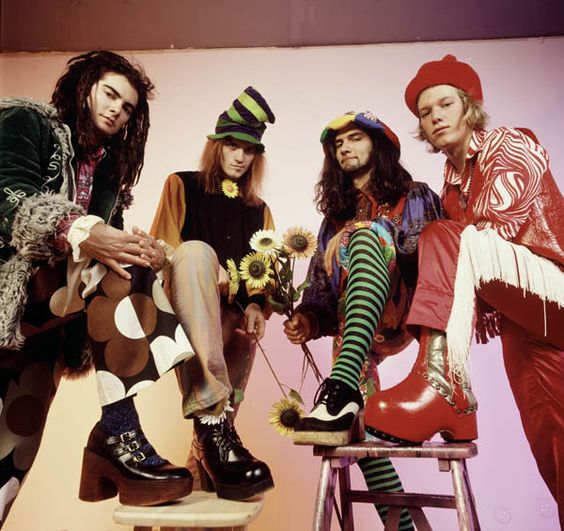 They’ve better songs, Jellyfish. Loads of ’em. But there’s something about this track that pulls you in, It’s not immediate in the way the other tracks on Bellybutton are. It forsakes much of the stuff that makes Jellyfish instantly likeable – the out of control Big Star-ish ramalama, the upbeat singalongasixties melodies, the ‘I’ve heard this before‘ Beach Boys by way of Queen (let that sink in) arrangements. In its own way, Bedspring Kiss is something of a forgotten mini-masterpiece. As is the whole album, for anyone who’s never indulged it.

Now, who has an old vinyl copy they’d be willing to donate to the Plain Or Pan Museum of Records?

Jellyfish were great. Power pop for the pre-Nirvana teeny boppers. Tunes by The Beatles. Backing vocals and guitar solos by Queen. Clothes by Hanna Barbera. Modern day insipid retro tunesmiths like The Feeling would give their stripey trousers and kerrrrazzzeee facial hair to be able to write half a tune as masterful as ‘Now She Knows She’s Wrong’. They must listen in jaw-dropping awe to ‘Bellybutton’ or cry over their copy of ‘Spilt Milk’ at least once a week.

Jellyfish only made the aforementioned 2 albums before splitting. I never got to see them live although I think they once played King Tuts. My pal’s band played a few shows with them in America and told me that for all the day-glo Californian sunshine and love image they projected, they were really a right grumpy bunch of selfish unfriendly bastards. Especially Andy Sturmer, the singing drummer. Fans of the Trashcan Sinatras may recognise the line, “There’s an anecdote about an argument with the singer from Jellyfish.” It’s a good anecdote too… 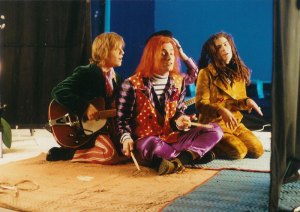 Nowadays, the various musicians that made up the band can be heard on a multitude of off-shoots and side projects (including, but not exclusively Imperial Drag, The Moog Cookbook, Umajets, TV Eyes) all on a MySpace site near you. There’s actually too much music to investigate beyond Jellyfish, and I’ve never tried to (!) The 2 albums plus the 4CD Australian box set ‘Fan Club’ are all I need. The demos and live cuts below are taken from the long-deleted and hard-to-get box set.

The Man I Used To Be

Calling Sarah (with ‘She Loves You’ “Yeah Yeah Yeah“‘s)

All I Want Is Everything

No Matter What (Badfinger cover, live)

Still needing more? Can’t get enough of Jellyfish? How about this? Right click on the picture below, ‘save as…’ and print it off. Voila! Your very own official Jellyfish colouring-in page, taken from the promo coloring-in book (note American spelling) from 1990. Make them as sunny day-glo Californian or as grumpy as you want.