Well. This piece is causing all sorts of debate over at Louder Than War. Shoot me down…. 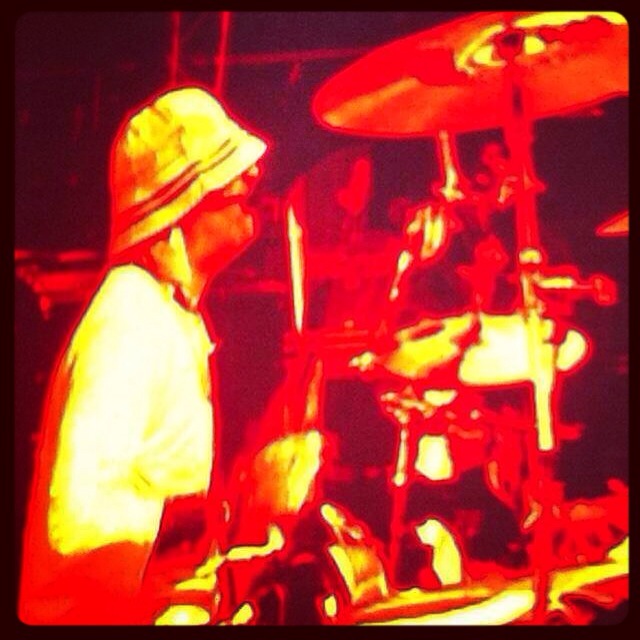 “The music business is a cruel and shallow money trench, a long plastic hallway where thieves and pimps run free, and good men die like dogs. There’s also a negative side.”

Gonzoid observationalist Hunter S Thomson said this 30 odd years ago. It’s never been more relevant today. The Stone Roses know all about the money trench and the thieves. For any good men and women attending their show at Glasgow Green, they will now, unfortunately, know all about the negative side.

At a gig of this magnitude, you expect all walks of life to be present; the good, the bad and the downright ugly, but this was something else entirely. Brad Pitt was in town a year or so ago filming zombie slopfest World War Z, and as the afternoon turned to evening, the Green resembled a lost cut of the movie. Had Brad been here, he’d have been looking for direction. Or a way out. It was as if every mental health establishment in the West of Scotland had simply shipped every one of its patients up the Clyde and into the park before flinging the key down the nearest, darkest well and doing a runner. Inside, the park was a human cesspit, a giant soup of slurring, slevering stupids in splatted bucket hats, barely able to stand or sit or stagger. It was horrible.

This isn’t supposed to sound snobbish, but it will invariably be taken that way in any case. So shoot me down. Music fans, the ‘real’ music fans who are regular gig goers and album buyers and live and breathe music like it’s some all-encompassing need for survival will be now be reflecting on a gig where more of the focus was on what was happening around them than what was happening on the big stage in front of them. Music is for all, and you can’t deny anyone’s right to like a band, but why is it The Stone Roses seem to attract the wrong element?

The ones in wee huddles, backs to the stage and openly sniffing and snorting their Class As off of credit cards and keys and whatever else provided a flat surface. Not there for the music, are they?

The ones pilled, powdered and poppered off the planet who, by default, created their own wee exclusive zone amongst the decent people where they could foam at the mouth and loll around, indifferent or oblivious to the sounds coming from the stage. Not there for the music, are they?

The ones tossing cups and bottles containing overpriced beer (and worse) with joyful abandon into the air and onto the crowd in front of them. Throwing pissiles is, I think, the phrase I’m looking for. There were hundreds of these cretins everywhere. Not there for the music, are they?

And the thugs. The 40-something year-old grown-up hooligans in expensive sports wear, pent-up aggression evidently at boiling point, perpetuating the underlying threat of violence if you happen to glance at them the wrong way. Not there for the music, are they?

With all this distraction it might’ve been difficult to focus on the stage. Just for the record, The Stone Roses were terrific. But you probably knew that already. I’ve seen them live a handful of times since 1989 and this was easily the most full-on, the most fluid, I’ve ever seen them.

Bobby Gillespie had earlier invited us to Kick Out The Jams, but if anything, the Roses were hell-bent on doing the exact opposite. The 17 song set was packed full of add-ons, cheeky Beatles riffs when Squire thought no-one was looking and enough improvisation required if anyone still doubted this band’s ability to play. I Wanna Be Adored was given a coda akin to Sly Stone going 15 rounds with Jimmy Page.  Standing Here’s Hendrixian hysterics gave way to a beautifully extended and elongated chiming guitar part that ebbed and flowed like the tide on the Firth of the Clyde. Fools Gold, misplaced (to these ears at least) in mid-set was an astonishing exercise in 10? 15? 20? minute motorik, precision funk, its lazy Krautrock groove underpinned by Mani’s outrageously switched-on bass playing and Reni’s octopus-limbed polyrhythms. The best rhythm section around? I think so. Brown’s vocals, so often the brunt of ridicule and mirth sounded fairly decent. In tune, even. Although it could be hard at times to hear him amongst the out of tune voices barking approximations of the right words back at him.

The gig, the actual musical part of the gig was an absolute triumph. You’ll read lots of testimonies to that over the next few days and weeks as writers trip over superlatives in an attempt to help you fully appreciate it. In fact, I won’t be surprised if/when the Stone Roses let slip that Glasgow Green 2013 really is the best gig they’ve ever played. They simply were that outstanding. It’s just a shame that it was all played out in such shitty conditions.

Here’s two versions of I Am The Resurrection, one , a faithful to the album version from Rooftops in Glasgow, June 1989 that I recorded myself on my Dad’s wee dictaphone….

The other , below, is from the last time they played Glasgow Green, in the big tent. By this time, the band had stretched it out to almost 11 minutes long. At the weekend, it was even longer. You can read about the first Glasgow Green gig here.

And here’s I Am The Resurrection from Saturday night in all its 12 minutes glory.

(Link removed at the request of video owner)