So the big milestone birthday came and went in a week of extended celebrations, Indian food, mislabelled birthday cupcakes and enforced fun with the family who found themselves gathered in the living room last Saturday night with no chance of escape until they’d participated in argumentative games of Family Fortunes and something called ‘Shout Out’, a rapid-fire general knowledge game that, we all agreed, had all the makings of a prime time Danny Dyer-fronted quiz show. “Shaaaaat Aaaaaht!”

My sister Shona and her husband Terry pulled out all the stops on the presents front. The week previously, Shona had been at the run of 3 Billy Bragg shows in Glasgow and hung around afterwards to grab a photo opportunity and a quick chat with old Bill. In one photo he was wearing a customised Smiths t-shirt, replete with the logo ‘Morrissey Sucks‘. It’s a cracker of course, reflecting the fact that these days Steven Patrick very much does indeed suck, not only for his increasingly watered-down records and hideous parallel jeans, but mainly for his questionable and indefensible political views.

After a bit of persuading, yer actual Billy Bragg offered to email Shona the digital artwork for what was a one-off t-shirt and so it came to be that I now have my own Billy-fashioned Morrissey Sucks t-shirt, only the second of its kind in the world. I’m very much looking forward to sporting it wherever it might get under the skin of the most vocal of Morrissey apologists. 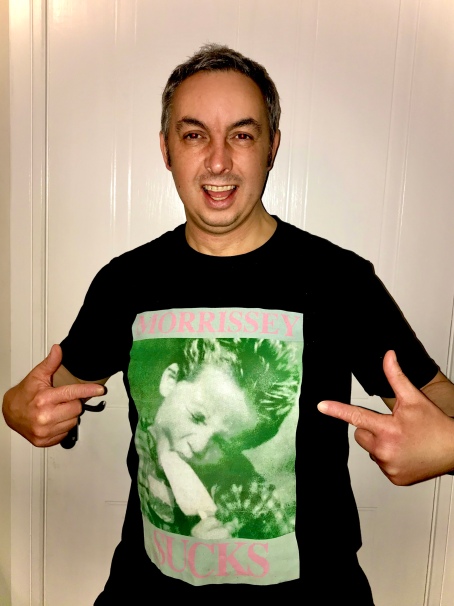 Perhaps even better than this – actually, definitely better than this – was the book Shona had published. Going back to the beginning of Plain Or Pan, she very methodically picked out the highlights from almost 13 years of writing and had them complied into a coffee table-sized hardback book – definitely the only one of its kind in the world; coloured pages, the odd collage of pictures, but mainly the best of the writing about outdated music for outdated people, ordered non-chronologically, with sections on some of the more-regularly featured bands – there’s plenty on Teenage Fanclub, The Smiths, The Trashcan Sinatras, a decent selection of Six Of The Bests (an almost extinct feature these days, given how difficult it now appears to be to hook in a second division pop star and have them yap away about their favourite records) and more than a few forgotten-about articles that have aged pretty well.

Of course, there are a handful pieces that cause me to wince slightly when I re-read them a decade on from when they were first fired off and out into the ether, and there are maybe 2? 3 at most articles (OK, there are another 16 articles!) that I’d have looked to include had I done this myself, but over all its an absolutely fantastic thing – a really brilliant present – and it’s extremely impressive to see your own work in such tangible form as this.

Best present ever? Aye, it’s certainly right up there.

My Tweets
Join 1,021 other followers