This is something of a first for Plain Or Pan.

Regular readers will be aware that most of the music that appears here is from before, say, 1985. Anything else more up to date than that must past strict and stringent tests to ensure the quality of the fare on offer does not drop too far down on the old Tune-O-Meter. The artist featured here is so achinghly hip and happening and cutting edge and NOW that I fear my keyboard may temporarily freeze over, such is the ice-cold coolness he and his band of East London renegades appear to have.

Charlie Boyer and The Voyeurs have been played a lot on 6 Music. So thanks to the BBC, and Marc Riley in particular, who’s super-enthusiastic about their music and has had them in for sessions, Charlie and his Voyeurs have become my new favourite band.

If I was 18 or 22 or even 25, I’d go so far as to say they’re the best band ever. At that age, you’ve perhaps still to hear the influences that so clearly seep into their music.

But, by my age, you’ve pretty much heard it all. It was the singing that got me first. “That sounds like Television!” The Tom Verlaine-esque lazy drawl. The snaking, intertwined  guitar riffage. Pure Television.

Then it was the tunes. “That sounds like something off a Nuggets LP!” Short ‘n sharp ‘n full of Farfisa. If you dug it, it’s a Nugget, as someone once said.

Then it was the sound. “That sounds kinda like Horrors and Toy and all those new-psyche bands. Or like The Strokes back when they were cool and vital and everything.”

The Voyeurs look like them too. Or to be more accurate about it, they look like the Velvet Underground in 1967. Lean, mean and looking pristine, they’re all black leather and skinny jeans and bowl cuts, with pointy boots comin’ at you like the Krays wielding a pair of snooker cues.

If you haven’t yet watched the video, look again at the promo shot at the top, and new single (their 2nd) Things We Be sounds exactly as you’d expect it to. Following on from debut release I Watch You, it’s out this week. You should buy it. A scuzzy, scuffed garage band affair over and out in 3 chords and 3 minutes,  it has a real chance of scraping yer actual charts (whatever they are these days) and should see Charlie and his four Voyeurs primed for pole position come summer festivals time. The debut album Clarietta is released at the end of May and it wouldn’t surprise me if that goes Top 10 before June. You heard it here first, boys ‘n girls.

I started writing this piece before Charlie had agreed to contribute to it, so it was pleasantly surprising when a) he agreed to do it, and b) his choices by and large mirrored my ideas of what his band’s influences might be. Amongst the 17+ minutes avant-garde New York cool of the Velvets and Edwyn Collins’ nascent, knee trembling, clattering dub reggae-by-way-of-Bearsden, you’ll find the dumb fun, fun, fun, of early Beach Boys, the effortless, unparalleled BIG sound of the Big O (an influence in the shades dept. at least), The Fall covering a bona fide Nugget and the new-psyche sounds of labelmates Toy. 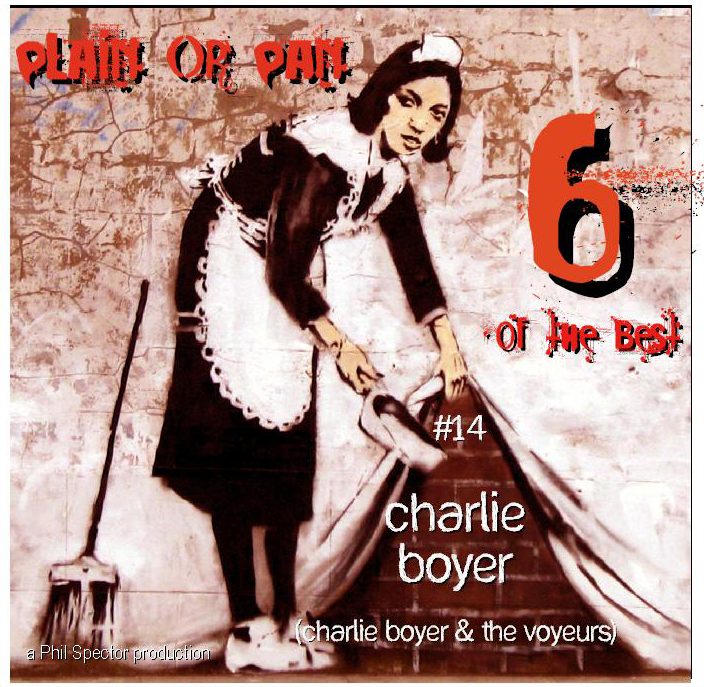 1. The Velvet Underground
Sister Ray
It has excited and amazed me since I was 15. It has 3 chords and is completely magical.

2. Roy Orbison
You Got It
I love his Sun/Nashville period…some of the best songs I’ve ever heard. But for some reason this is the one that gets me at the moment.

3. Orange Juice
Breakfast Time
We recently recorded with Edwyn Collins and this has always been my favourite. It’s the B-side of Simply Thrilled Honey. The structure and the lyrics are really interesting together.

(Plain Or Pan says: I always preferred the version on the Rip It Up LP – full-on dub reggae by way of Bearsden)

(Plain Or Pan says: Younger readers may be interested in the original version by The Other Half. It’s pretty essential.)

5. The Beach Boys
Little Honda
One of their best rock n’ roll songs. Really good naive lyrics. And I think one of Brian’s first productions for the band?

(Plain Or Pan says: Aye – possibly Brian’s first ever production at that.)

6. Toy
My Heart Skips A Beat
Their new single. And my favourite song on their album. The string/synth bit at the end is wonderful. Sounds like something from Lou Reed’s Berlin.

Magic, eh? Every Six Of the Best compilation comes in a handy RAR download file. Get Charlie Boyer‘s  here. Or here.

Now go and buy some real records and bask in the I-told-you-so glory when …the Voyeurs sell out at a venue near you later on this year.