Man. Life is unfolding in slow motion just now. Days blur into nights, nights turn into TV or reading marathons, the mornings become afternoons and we’re back to chopping red peppers with the 5 o’clock government briefing playing out in the background. The sense of displacement, of unreality, isn’t helped by the nightly dissemination from the Government stooge at the middle lectern. It’s quite a skill to stand there and say nothing at all for a whole hour, to bat and deflect any difficult questions, to go against your own principles and celebrate the NHS after voting against health workers getting a pay rise then cheering the result when it was overwhelmingly rejected, but that’s what they do. It’s what their pal did the day before and it’s what some other insipid flunky with a home counties accent and a degree in talking pish is going to have to do tomorrow evening as well. And it’s all reactive – because of this, we’ll do that. It’s never proactive. The other constant is the continual anonymity of the Prime Minister. At the first opportunity of escape, he was off. Ah-tchoo, he went, and he was nowhere to be seen, what little reputation he may have had rapidly sliding into negative numbers. Distressingly, the only thing that does change daily is that ever-rising death count. The highest in Europe, they’re expecting. They can see it coming, but they don’t know what to do. Worrying times indeed.

It’s music we always return to, the instant fix in a world gone wrong and this slow pace in life has been sound-tracked by all manner of great stuff recently. With more time on my hands, and more phone in my hand, I’ve been digging deeper into corners of the world wide web I may have previously by-passed. The ever-reliable Adam over at Bagging Area has created a trio of terrific Isolation Mixes, seamlessly ambient pick ‘n mixes of stuff you may be familiar with, woven in-between previously unheard beauties. Jack Kerouac samples over Joe Strummer records, Eric Cantona versus Daniel Avery, plenty of Weatherall and David Holmes, the odd slice of Durutti Column…. not always the sort of stuff I’d feature regularly here, they’re great mixes and you could do worse than head over to Bagging Area and find them there.

Listening to Adam’s mixes has had me reaching back to The Orb, in particular Blue Room, their long-form 40 minute single that led to one of Top Of The Pops more esoteric moments. It‘s an astonishing piece of music; groovy, arch, out there and created purely for the benefit of exploiting chart rules. Up until 1992, CIN rules dictated that chart singles could be no longer than 25 minutes long. A change in the rules, a reaction to dance culture when singles came backed with multiple remixes, allowed singles of up to 40 minutes to chart. The Orb took this as a challenge and created the 39:57 Blue Room.

Blue Room grooves along on windswept ambience. It bubbles and bleeps, dives and soars. One minute it’s flotation tank otherworldliness, the next it’s cosmic time travelling through the galaxies. An ethereal female vocal drifts in and out. Spacey whitewashed whooshes leave vapour trails floating out into the ether. There’s an occasional half-hearted beat, a sparse drumkit recorded in a far-flung place, the Gobi desert maybe, that eventually creeps into the foreground of your conscience.

It’s around 7 and a half blissed out minutes before the beat properly kicks in, kept in time by a combination of drums and congas and coloured by the sort of looping, circular dub bass that hasn’t been heard since Screamadelica the year before. It’s dance music Jim, but not as we know it. For 40 minutes it ebbs and flows, the key elements coming and going like actors in a West End play – lead role one act, supporting cast the next – until it fades out on a mangled sample of Marilyn Monroe singing Happy Birthday to JFK. 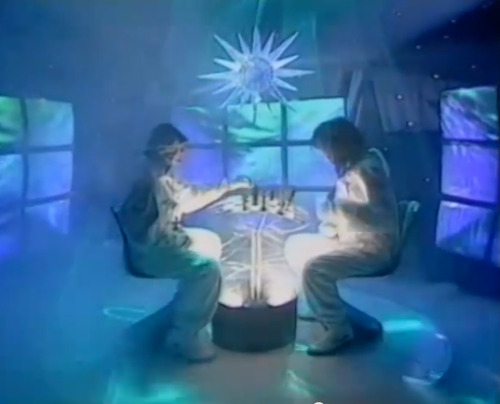 Entering the singles chart at number 12, Blue Room rose to number 8 the following week and earned itself a slot on the nation’s favourite TV pop show. A very edited version of the track was played while a bemused production team and audience watched on.

Bathed in green and blue light, the two principle members, Alex Paterson and Thrash, sat side-on to the cameras, heads down, practically silhouetted, and played out a game of futuristic chess dressed in exactly the sort of suits the government should be providing for every health worker in the land at this time. Not quite the epoch of Bowie and Ronson but for comedown clubbers everywhere, this was their moment.