If only I’d had these tracks in 1989! Round about then I taped Paul McCartney‘s MTV Unplugged off the telly and must have watched it about a million times. Well, at least 30. The bit I kept going back to was where he played ‘Blackbird’‘ (or ‘Blackboard‘ as he referred to it on the programme. Ho ho.). I slowly but surely worked out how he played it by freeze-framing the trickier parts, playing the mirror image of what south paw McCartney was playing and rewinding it as soon as the song had finished. I’d then play along to it with my vinyl copy of The White Album on my stereo.

The cover of my White Album technically isn’t white. The bottom left-hand corner and the inner gatefold has a distinct beige look about it. Probably because I pissed on it during the night after my 18th birthday. But that’s another story. Anyway. Freeze-framing and rewinding videos followed by carefully dropping and lifting record player needles at the right points on a record made learning this song a labour of love for me. Kids nowadays have it easy. Whomp ‘Sweet Child O’ Mine’ onto the iPod docking station, fire up UltimateGuitar.com and there it is, 300+ tabs of the same song, all slightly different, mostly all good. In my day you had to earn your guitar stripes. Tsk.

When they first started playing guitar, McCartney and George Harrison both learnt to play Bach‘s Bouree in E minor so that they could show off at parties. Looking for some post-Pepper inspiration, McCartney was staying at his farm on the Mull of Kintyre and wrote ‘Blackbird‘ after playing about with Bach’s tune. According to Philip Norman’s book ‘Shout!‘, later that same day he played it to the fans who were waiting outside the gates of his house.

“A few of us were there. We had the feeling something was going to happen. Paul didn’t take the Mini inside the way he usually did – he parked it on the road and he and Linda walked right past us. They went inside and we stood there, watching different lights in the house go on and off.

In the end, the light went on in the Mad Room, at the top of the house, where he kept all his music stuff and his toys. Paul opened the window and called out to us, ‘Are you still down there?’ ‘Yes,’ we said. He must have been really happy that night. He sat on the window sill with his acoustic guitar and sang Blackbird to us as we stood down there in the dark.”  Fan Margo Stevens, quoted by Philip Norman in ‘Shout!’

It’s been said that the lyrics are about the civil rights movement in America and the struggle for equality. Or it might just be about a wee bird that McCartney saw in his garden one summer’s morning in 1968. Without wanting to sound too glib about it, as a guitar player it was always the finger picking and overall sound of the record that grabbed me.

These days, Blackbird has become my Bach and it can now be yours. What you have is a hassle-free way of learning ‘Blackbird”. The tab taken from The Beatles Complete Scores is here, in word document form. And below you have 10 or so in-the-studio crystal clear versions of ‘Blackbird’. Some fast, some slow, some with fluffed lines, some that stop short. There’s some rudimentary piano clanging on one take. There’s also the odd bit of studio chatter between Paul and George Martin. Occasionaly there’s a third voice. That’s a slightly fed-up John Lennon, taking a break from putting together ‘Revolution 9’ in the studio next door.

All tracks are taken from a Beatles bootleg called ‘Gone Tomorrow, Here Today‘ and were recorded at Abbey Road Studio 2 on June 11th and July 29th 1968, and at Trident Studios on August 28th and 29th 1968. None of the tracks on my bootleg sleeve are marked as being a particular take, so I can’t be any more precise about their origin than that. But this is a good way to learn the song – it’s essentially a work-in-progress session. McCartney repeats the trickier parts and plays it again and again and again, honing it to perfection. Anyway. Take the tab, download the tracks and play along. You’ll have it mastered in no time. You’ll need to add your own foot taps and bird noises. Party piece ahoy! 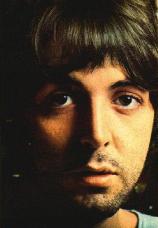 Piss stain not in shot