I Heard It Through The Grapevine was first committed to vinyl by Gladys Knight & The Pips, although it’d be Marvin Gaye who would have the first hit with the song. But you know all that already. If not, I’ve written about it before. For me, the most interesting (but not necessarily the best) version of  …Grapevine comes from The Slits.

In ye olden days of punk rock, Slits stood out. A female 4-piece, their lead singer was a 15 year-old German girl whose mother would later marry John Lydon. Guitarist Viv Albertine lived in a squat and was Mick Jones’ girlfriend. Drummer Palmolive was born in Spain and lived for 2 years with Joe Strummer. Not at all like the ‘typical girls’ they sang of on their debut single.

They under-rehearsed, they dithered over releases and they supported The Clash on a couple of tours (To quote Joe Strummer – “They need to do thirty gigs in thirty days and they would be a different group. Then they’d be great.”)

Formed in 1976 at the birth of punk, it took The Slits 3 years to release their debut LP. In those three short years, music progressed by several light years but Slits stuck at it, honing their talents in a couple of John Peel sessions. It’s been said that Slits couldn’t play their instruments, but that’s clearly punk talk from the blinkered few who wanted to keep them authentically ‘4 Real’.

The Slits could play! They eschewed all forms of rock music (a dirty word in Slits’ world) preferring instead to form a unique sound built from reggae and the more interesting musical corners of the world. Itchy, scratchy, claustrophobic and defiantly dubby new wave pop music. Nowadays, lazy writers would call it ‘angular’, a term thrown at everyone from Franz Ferdinand to the Kaiser Chiefs. But at the tail-end of the 70s, no-one sounded like The Slits. 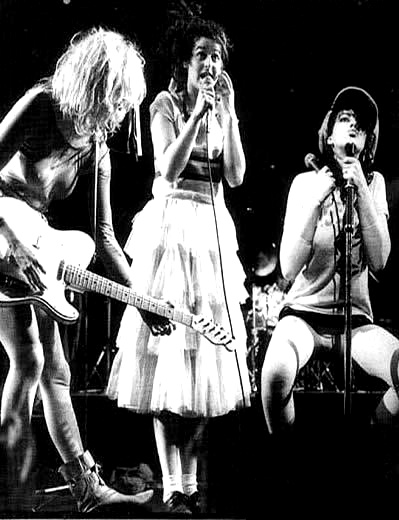 Their demo version of I Heard It Through The Grapevine is terrific – in equal parts quirky, jerky, punky and funky.

The Slits – I Heard It Through The Grapevine (demo)

Like an aural sharp elbow to the gut, it’s designed to irritate, grate and annoy. It’s very uncomfortable – twitching away like Thom Yorke’s gammy eye in the midday sun. The scratchy guitar and dubby bass, coupled with the rat-a-tat percussion is as far removed from ‘punk rock’ as you’d care to imagine, making it a west London cousin to Talking Heads, its catholic musical policy a precursor to that band’s Tom Tom Club alter ego.

By the time Island Records had enlisted Dennis Bovell to produce the album, the band’s sound had rounded out slightly. He took the blueprint of the demos and added a cavernous, bottom-of-the-well booming reverb to it all, enhancing bits here and there with wonky, skanking keyboards and banshee wailing backing vocals. I Heard It Through The Grapevine comes out of all the whole process sounding mightily fine. Indeed, if you pay close attention, that sound you can hear in the background is the sound of a thousand soul boys wailing in despair at what The Slits have done to the Marvin version.

The Slits – I Heard It Through The Grapevine (LP version)

The album and associated singles still stand up to repeated listens today, a bona fide alternative classic in a Mojo-endorsed world of Dylans ‘n Beatles ‘n Zeppelins ‘n Stones. You should investigate further….