Years ago I was doing supply in a school where they dedicated a whole Friday afternoon to the learning of new skills; baking, woodworking, knitting, glass staining and so on. The kids loved these afternoons. The dinner ladies helped with the baking, the janny helped with the woodworking and experts from the local community came in to impart their considerable knowledge in the art of growing root vegetables and making stained glass. With each new term, the kids could pick a different skill so that over the course of the school year they got to partake in four activities.

Being the supply teacher, I was right at the bottom of the hierarchical pyramid and I watched, pained, as first the blogging and then the guitar groups were given to two teachers who couldn’t care less. Each subsequent activity was assigned to a nonplussed teacher until, finally the head teacher looked at me with a thin, watery smile and handed me a box of battered, rattling chess sets. “Chess Club!” she confirmed. “I doubt many will pick it, but it’s an option.” She never asked if I played chess, if I understood the rules, if I wanted to be in charge of the chess club. I just was.

I did know how to play chess, as it happened, but it was years since I’d done so. Anyway, I took the chess sets, fumbled together half a dozen complete sets out of the ten or so ancient boxes I’d been saddled with and set about turning my classroom into a (cough) Chess Club.

On the first Friday, seven kids – there’s always an odd number for these things – turned up to see what all the fuss was about. None of the kids I knew. Six of them were curious to see this new teacher in the school – a man! – and the seventh was sent to play chess because he’d already tried to stab someone’s hand with a gardening fork outside. Grrrrreat. First thing I did was draw the blinds to create an ambience that encouraged studied quietness.

After that I Googled an arty monochrome picture of Bobby Fischer eyeing up the board, typed ‘Chess Club‘ on top of it in an interesting font and displayed it on the smart board, a reminder to the players of where exactly they were. Then I rejigged the tables so that the players sat in a square around the sides of the classroom, allowing me to stand in the middle and explain the object of the game and so on, helping the kids as they took their first unsteady steps into the geek world of chess.

As they slowly began to understand the whys and wherefores of the board, I introduced music. Classical stuff sometimes, an Erik Satie piano piece or two, but mostly jazz, mainly John Coltrane or Oscar Peterson but always Miles Davis. Sometimes I’d branch out into the blues, helping some poor cornered soul get out of a chequered funk as John Lee Hooker boomed out at a genteel volume in the corner.

By week three, the ‘Chess Club‘ image of Fischer had been edited to say ‘Chess (and Jazz and Blues) Club‘. By the following week, this had been shortened, in loose homage to CBGBs to ‘Chess AJABs Club‘. No-one complained. None of the school management noticed. I was having fun and so were the kids.

I taught them the one fancy move I knew, learned from my dad when I was 10 or 11, about the same age as them, where you could put your opponent in checkmate in three moves. More fool me, as after that, they all wanted to play white. One time, the garden fork boy got so enraged at being put into checkmate before Miles Davis had parped his way out of his first solo that he tossed the board and all its pieces into the air and stormed off. “There was no need for that, Mr McAllister,” said his victorious opponent in a world-weary voice that suggested she’d seen all of it before.

Over the weeks, the chess kids progressed to a reasonable standard. They played one another, they challenged and beat me, they seemed to enjoy themselves. In fact, when the time came to renew activities at the end of term, half of the kids chose to stay at the chess. And on their return in January, a couple of them told me excitedly that they’d woken up on Christmas day to a new chess set under the tree. One of them even got a ‘Best Of Jazz’ CD too. As it turned out, Chess (and Jazz and Blues) Club was alright.

We’ve binged recently on The Queen’s Gambit, Netflix’s seven-parter that tells the story of a young girl’s rise to Grandmaster level. It’s ace.

Set against a backdrop of 50s and 60s Cold War America, it is, on every level, a triumph. Visually, it’s stunning. From the trippy, imagined chess pieces that emerge from the ceiling each night and play combinations of winning moves that the lead character Beth Harmon commits to memory, to the period-perfect set design, every episode has the appearance of being filmed through a particularly agreeable Instagram filter. The more poetic of us might even suggest that the muted tones and dull pastels of the actors’ clothes that contrast with the glossy shine of hardwood and chrome are metaphors for the opposing sides on the chessboard itself.

The cars – big, American gas guzzlers, all sleek fins and whitewalls, cruise across the background like gliding bishops picking off pawns. The houses, with their mod cons and perfect lawns, bordered by subtly territorial picket fences, are the very symbol of nuclear family success. ‘Stay out,’ they scream silently, ‘or I’ll take you out.’ It’s a world at odds with the lead character – supremely played by Anya Taylor-Joy – yet here she is.

The hotels where the chess matches are played, especially as the series progresses and the competitions become more exclusive, are grand affairs. Jet-setting across the continents, Harmon and her mother enjoy nothing less than the good life. Expensively-wallpapered corridors and opulently furnished dining areas are accessed via long-winding and never-ending Art Deco staircases.

There’s a terrific scene set in Miami where the swingin’ Quincy Jones track above perfectly soundtracks Harmon movin’ on up to the competition floor, sashaying confidently to another crushing victory against an awkward and embarrassed male player, all the while looking like Jackie Onassis’ cool half-sister.

A horrendous childhood and a less-than-smooth passage into adulthood comes at a cost to our young prodigy. To cope with all that life has thrown at her, Harmon has developed a fondness for tranquilisers and booze. Her numerous breakdowns and spirals into addiction are soundtracked by period-era deep cuts. If she’s not kicking off a three-day bender by dancing like no-one is watching to Shocking Blue’s Venus, she’s discovering pot to the sound of Gabor Szabo.

The throb and thrum, the slowly spidering guitar line, the creeping paranoia and electric dischord are just the thing to simulate an out of body experience, no?

Or how about Gillian Hills’ 1965 slice of fingersnappin’ French Yé-yé mod-pop?

Druggable yet fruggable, Tut Tut Tut Tut features during another particularly memorable scene, bursting through the stately piano that is woven through the soundbed of each episode, as joyously unexpected as the ever-attacking Harmon choosing to play the Sicilian Defence.

To be perfectly honest, every scene with Taylor-Joy in it is memorable. Usually, a blink of her dark almond eyes is all it takes to hook you in. She plays perfectly the ever-spiralling Harmon with a magnetism that should win her whatever awards are going these days for Netflix dramas.

The Queen’s Gambit is a masterclass in stylish home cinema. As the year creeps to an undignified close, we may well have found the best thing about it. Watch it. Now! 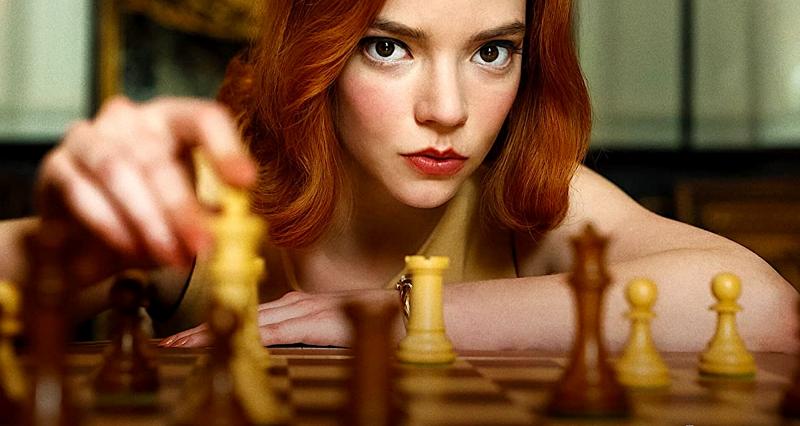