It begins churchlike, funereal almost, a lone organ blowing the dust off its keys as a skittering snare rattles the conscience awake and synthetic beats provide the heartbeat for what follows. It’s slow and stately, the ideal bed upon which Thom Yorke can waft his wonky-eyed falsetto. A guitar line snakes in, unusual of time signature, creatively arpeggiated and clean, an excellent woody tone, you think, and a glimmering shimmer of strings (possibly an arcane instrument I am ignorant of – Jonny likes an unusual instrument for creating his soundscapes, as you well know) – sees the melody take a gorgeous and unexpected turn.

Devastation has come, sings Thom. Left in a station with a note of poems. Now there’s never anywhere to put my feet back down.

I don’t pretend to know what particular heartbreaking ruin he’s singing about, but the whole melody that follows is amazing. In slo-mo, and right in front of your eyes, it untwines and unravels, unspools itself free and starts to wander. As your ears follow its sinuous path, you’re aware that the drums have picked up in emphasis, freeform and jazz-like, and they are also wandering independently, fluttering rapidly like Kingfishers’ feathers by the softly flowing Afton.

Then… the brass section! It gently blows its way in, stately and creeping, just like that advert for Castrol GTX that you’ll remember from the 1980s, the thick golden yellow substance easing and oozing its way into the head of the mechanic’s misplaced spanner. Speech Bubbles, for that is the name of the track, would make a great soundtrack were they ever to reboot the original and cast aside Mahler’s imperial Nachtmusic. 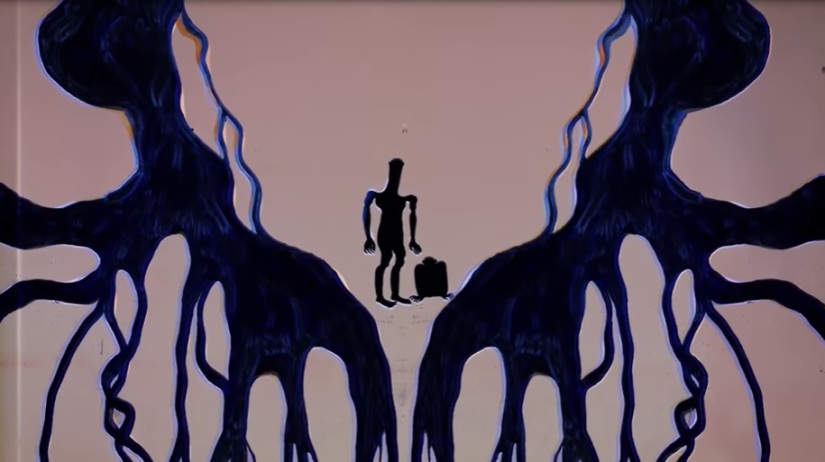 I am in no way a tastemaker or some barometer of hip opinion – the tagline at the top of the blog there would suggest that – but for what it’s worth, The Smile‘s A Light For Attracting Attention is, by some way, my album of the year. Speech Bubbles may not even be the best track on it, but it most definitely is this week.

Whereas Jonny and Thom’s day job takes months, years, to evolve to the point a record is made, The Smile seems spontaneous, almost guerilla-like by comparison. Constant touring for the past few months has seen them regularly drop brand new songs into their set, much to the frenzy of the fan community for whom even a Thom Yorke recorded sneeze might find itself overanalysed and quite possibly remixed before he’s made it back to the hotel from the show.

Radiohead may be on permanent sabbatical, they may even have already dissolved, but The Smile more than makes up for their absence. I can’t wait to hear what they come up with next.