I once blew the chance of an interview with Nancy Sinatra after she took exception to the ‘Phil Spector’ handle under which I wrote.at the time. “Why on earth would I want to be interviewed by Phil Spector?” she asked aghast, failing to realise that it wasn’t yr actual wig-headed murderer that was cold calling and asking for the chance to chat about making records with Morrissey. “He was a strange, strange, man and I want nothing to do with him.” Fair point, Nancy. Fair point. Lesson learned – never use daft pseudonyms on the internet. I should have signed up to her long-gone fan forum under my real name.

Those records Nancy Sinatra made with Lee Hazlewood defy both time and pigeonholing. Often kitsch and sometimes countryish yet nearly always lush and orchestral, their parping brass and earthquaking vocal lines may well have wafted straight offa the grooves of a Tindersticks or a Cat Power record. Nick Cave and Kylie Minogue vamping it up on ‘Where The Wild Roses Grow‘? Pure Lee ‘n Nancy, The entire whispered, gothic ouvre of Mark Lanegan and Isobel Campbell? Total Lee ‘n Nancy. Their influence, committed to wax over half a century ago, still resonates.

If James Bond had been a lonesome, wandering cowboy, Summer Wine may well have been his theme tune. 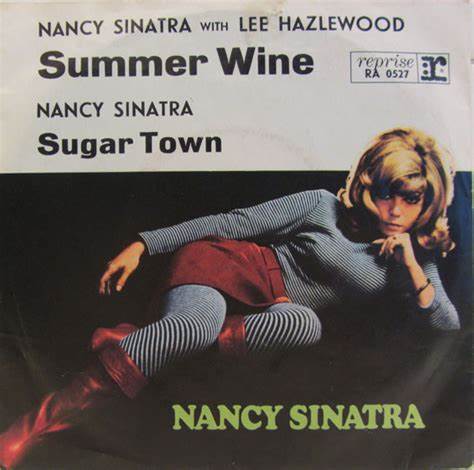 This version of Summer Wine wasn’t the first one Hazlewood had recorded with a female sparring partner – the first version features little-known actress Suzi Jane Hokom – but the better-known take, using the original backing track slowed down to treacle-wading levels of sluggishness, is the one you need.

Road-worn and roughed up, yet clean and pretty, it’s the perfect summation of all things Lee ‘n Nancy. The ping-ponging vocals – she crystal clear and high registered, he singing from the soles of his grit covered cowboy boots – sound like they’ve been recorded in separate studios and miles apart, yet they’re woven together into a time-shifting storyline of mutual seduction with a twist in its tail. Lee is the silver-spurred outlaw, a stranger in town that jingles his way into the consciousness of bored local flirt Nancy. Together, (adopts Hart To Hart voiceover) it wasn’t quite moida, but (spoiler alert!) Lee awakes after a night of metaphorical summer wine to find both Nancy and his boots have gone. 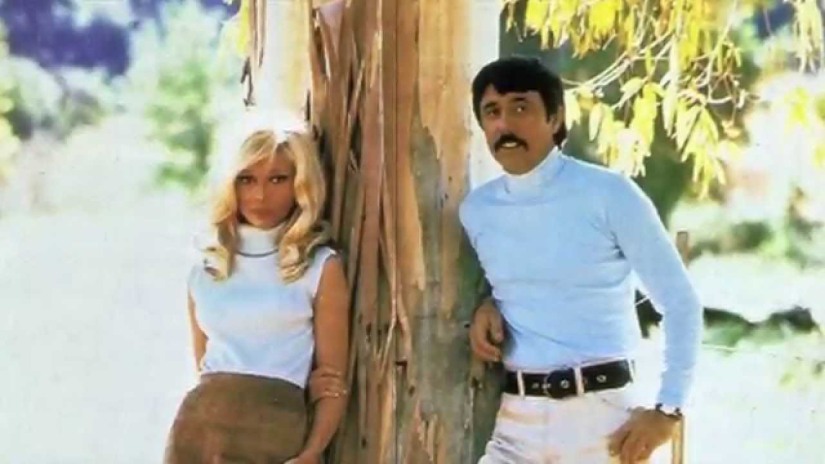 It’s a great record, from the sweeping strings that droop and divebomb in direct proportion to Hazlewood’s handlebar moustache to the honeyed brass section that vamps its way towards John Barry’s signature Bond riff hoping that no-one, least of all Barry’s lawyers, will notice. The assembled musicians, most likely members of the Wrecking Crew although information on that is scant to non-existent, strum, scrape and snap their way through it, laid back and louche, melancholic cowboy noir in a clip-clopping minor key. Stirring stuff.

Summer Wine is practically a standard these days and has been recorded by many.

Lana del Ray and her then-partner, Barrie-James O’Neill (from Scots nearly-weres Kassidy) soundtracked a terrific home video of hazy Californian beaches, Laurel Canyon porches and windswept hair with their take on the track. Adding the audio to the visuals makes the video feel like some bleached-out, drawn-out Hollister advert, but don’t let that discourage you from what is a great version. Lana’s suitably femme fatale-ish vocals; sultry, close-miked and just on the right side of huffy are a good foil for O’Neill’s tobacco-coated Scots’ croon. Extra points for the none-more-Lee moustache.