To enjoy the feast, you must first experience the famine.

That’s me misquoting Chick Young, BBC Sport Scotland’s football reporter, a man much-maligned but one who seemingly has a soft spot for the wee teams and community clubs who win little in the way of silverware and league titles, but who continually go to-to-toe with the commercial nous of the big two Glasgow clubs.

In something of a role reversal, it was my team Kilmarnock who were considered the big team, the big scalp, this season. Relegated a year ago in front of 500 socially-distanced supporters, we’ve huffed and puffed in a Championship where we were expected to take the game to our under-funded and under-supported opponents each week and sweep them aside in a display of breathless, free-flowing, attacking football. I’d say each Saturday, but, being the big team, many of our games were televised on the Friday night; games in which we regularly self-imploded by contriving to lose an early goal and then frustratingly fail to break down the opposition. Twenty minutes away to our bitter rivals Ayr aside, where we were three up before anyone’s pie had gone cold, breathless, free-flowing, attacking football was rather thin on the ground.

And yet, we found ourselves top of the league and by Friday night we would wrap up the title if we could only beat Arbroath, the tiny part-time team who had continually out-fought, out-thought, out-played and out-pointed every other team in the league.

Managed by the ‘charismatic’ and ever-quotable old-school manager Dick Campbell, Arbroath were everyone’s second-favourite team. Just as Scotland go head-to-head with Ukraine soon in a match that no-one outside of Scotland wants to see Scotland win, Killie found themselves in the position of being the panto villains, the party spoilers, the most-hated team in the country. If you weren’t wearing blue and white stripes, you were wishing and hoping that wee Arbroath could pull off the (not really a) shock required. In our three previous encounters, Kilmarnock had failed to score a single goal and had they scored one more than us on Friday night, they’d have leapfrogged us into first place with one game remaining. Everyone; the BBC commentators, Rangers fans, neutrals, all wanted an Arbroath fairytale win.

Arbroath did their bit, aided by a poor referee who saw nothing wrong in a bad tackle on the edge of the Arbroath box, and, as the Kilmarnock players remonstrated, an Arbroath player ran the length of the pitch, squared the ball sideways and a cool tap in saw the perfect conclusion to their counter-attacking breakaway. Killie 0 – 1 Arbroath.

The game was turgid, Killie dragged into playing long-ball football and frustrated by a team who slowed the game down at every opportunity, wasted time and employed every level of shithousery known in the name of anti-football football. Effective, though. Outside of East Ayrshire, the country celebrated and dreamed. By half time, the fairytale was within touching distance, but a fired-up Killie would sweep aside any notions of upset in a fly-past and one-sided second half. We left it late. Very late.

Wee Burke came off the bench. Off-form since being injured early in the season, this was rumoured to be the veteran’s last game. If so, he kept his best performance for a night when 10,000 home fans would be chanting his name in delight at the drive, determination and dribbling skills he had in his last twenty minutes locker. He sent over dangerous corner after dangerous corner and, after Shaw had seen his powerful downwards header sclaffed off the line,Taylor followed it up and slammed it into the roof of the net. The 80th minute equaliser was met with an explosion of noise heard as far away as deepest, southest Ayrshire. One goal wasn’t enough to win the league though. Continual Killie pressure prevailed. The Arbroath goalie was playing the game of his life, clearly injured yet turning shots round the post, over the bar, like Dino Zoff in his prime. Real Roy of the Rovers stuff. We battered and battered his goal. A winner would surely come.

It did. Late in the 89th minute, a beautifully-weighted long ball down the right saw Lafferty cooly control and pass it in one sweeping movement. Shaw, our number 9 controlled on the edge of the box and, as the clock turned to 90 minutes, laid it off for the on-rushing Alston, an attacking midfielder who for most of the season has come in for an unfair amount of stick. Alston shifted the ball smartly from left foot to right and, without breaking stride, stroked it home. Bottom right corner, the keeper static. Alston’s top was off and windmilling wildly above his head before the ball had even nestled properly in the net. The entire team, the subs behind the goal, even Hemming our goalie, displaying a Bolt-like sprinting ability to run the length of our hated plastic pitch, piled on Alston the hero. Watching back on the telly, I spotted a former pupil, a ball boy for the night, right in the middle of the celebrations. Scenes, as they say. A real, scripted, Hollywood ending, even if, for most of the country, the wrong team won in the end. Grim fairytale avoided. 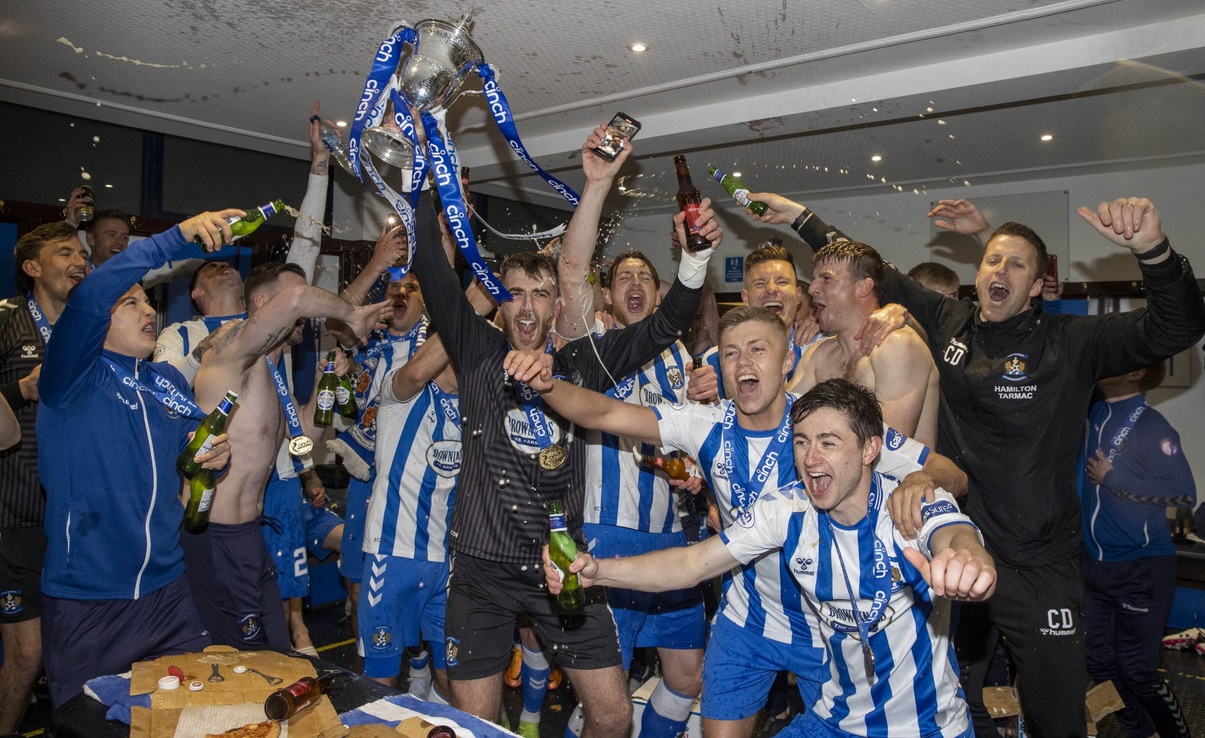 Killie last won the league in 1965. Since then, they’ve been relegated to the lowest league, worked their way back up through the ’80s – never winning a title, always going up as runners-up – and, until last season, had spent 28 years in the top flight. It’s not often then that Killie fans see their team win a league. Any league. It’s great to be back where we belong.

Otis Clay – The Only Way Is Up

Many (most?) folk assume that The Only Way Is Up was written for Yazz. Not true. Matt Black and Jonathan More – Coldcut to you and I – had a microscopic knowledge of rare and under-appreciated soul and recognised the potential in Otis Clay’s 1980 little-known original. Adding snatches of samples and a busy, train-like rhythm to a glossy, hi-nrg house production, they sat back in their swivly producers’ chairs and watched as it rattled and thumped its way to the top of the charts.

The original bears all the hallmarks of classic soul; chicken scratch guitar, sweeping disco strings and stabbing brass. If you didn’t know better, you could be be convinced it’s a street-smart cover of a ubiquitous ’80s pop classic, when in fact Clay’s version is the original. You knew that already though.