Hitting the shelves this week – ‘dropping‘, to use modern parlance – is the eagerly-awaited follow up to the Texas Sun record that Khruangbin did in collaboration with fellow Texan Leon Bridges. On Texas Sun, dustbowl desert guitars gently twanged with ambient reverb across four tracks of gospel-tinged southern soul and, from what has been heard so far, Texas Moon seems to follow in the same rich vein.

If this happens to be your first introduction to Khruangbin (and Leon Bridges too for that matter – a guitar totin’ troubadour with a proper caramel-coated, take-it-to-church soul voice), you could do worse than dip a toe into a pair of back catalogues awash with rippling guitar and beautifully considered complementary bass lines. Let’s focus for now on Khruangbin.

Khruangbin – So We Won’t Forget

So We Won’t Forget wanders in, cocksure and insistent, the result of an unholy alliance between the Bhundu Boys and the near-cousin of Lovely Day‘s bass line ; a groovy, heady mix of chiming, chattering African highline six string and sighing girl group despondancy that carries you away in its cooing breeze for five joyous minutes.

Ideal music for lying underneath an inky black panoramic sky of constellations or for soundtracking the wee small hours as you fight off the urge to fall asleep, So We Won’t Forget is a rare dichotomy of music that sends you to sleep while making you simultaneously want to dance in floaty, unselfconscious abandon.

Khruangbin (it translates as ‘aeroplane‘ in Thai) have undeniable style in clothes as well as music. Focal points Laura Lee and Mark Speer permanently peek from beneath a pair of perfectly-sculpted fringes that even Claudia Winkleman might find irritating.

Their clothes are never less than considered – Laura takes pride in wearing a different outfit for every show Khruangbin plays (600+ at the last count). Mark is the best-dressed drip of water on the planet, poured into rake thin, mile long ’70s lounge suits that might’ve come from the wardrobe department of a Hollywood movie set. The quiet man at the back, DJ Johnson Jnr on drums is more sartorially understated, preferring instead to let his pistol crack snare and rattling hi-hats add the requisite flash. 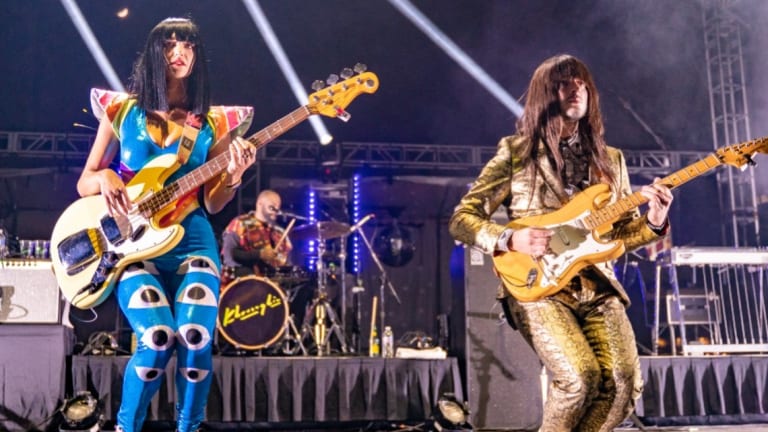 You get the impression that the musicians in Khruangbin could outplay just about anyone on the planet; the funk-infatuated drummer, the on-the-one wandering and popping basslines played with great touch and feeling and those free-form bubbling guitar passages, slow bent one moment, rapidly fired the next, that wouldn’t sound out of place on the end credits of an arthouse movie, or perhaps a pivotal slo-mo scene in a Tarantino box-ofice smash.

The trick though, as Khruangbin know fine well, is to consider the notes that aren’t played. Those missing notes are what gives the music of Khruangbin a feel as wide and expansive as the Chihuahuan Desert and a groove that’s positively out-there and gravity-defying.