In the olden days, when times were simpler and telly was defined by three channels, none of whom broadcast before the late afternoon, you could, for fun, retune your portable black and white TV and, through the white noise and static fuzz, pick up this alien-sounding entity called ‘Ulster TV’.

Transmitted faintly into Ayrshire from Northern Ireland, Ulster showed local news and endless, boring talking heads offering up political opinion and, instead of Scotsport with Arthur Montford, it showed highlights of this thing called shinty, a game played in damp, grey, muddy conditions in sometimes packed but usually half-empty rickety old stadiums. The black and white picture and hissy sibilance of the broadcast did nothing to enhance it. The commentators spoke with a jarring hardness that was at once at odds with the received pronunciation of their BBC counterparts over the Irish Sea. I’d never heard voices quite like these ones, and I wouldn’t again until I heard Van Morrison amble across the top of Coney Island. “I look at the side of yer fayce,” he says at the end, as hard as a bucket of bolts from Harland and Wolff, instantly endearing.

Luscious and languorous, Coney Island is one of Van’s greatest ‘songs’. I say ‘song’ with inverted commas because the whole thing is a string-swollen and gently rippling mini symphony, as uplifting as the Spring movement from Vivaldi’s Four Seasons, as heart-stirring as the Blue Danube Waltz, but with a sentimentality that never slips into schmaltz as Van recounts a story from his early years over the top of it. 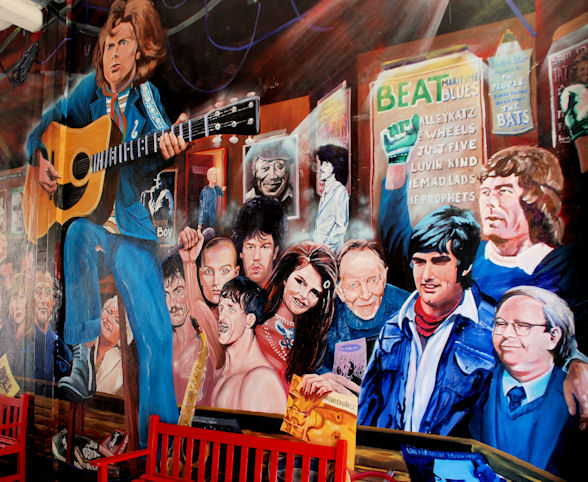 From his 1989 masterpiece Avalon Sunset, Coney Island is Van’s tale of travelling as a small boy with his mum to Coney Island, a small seaside village on the eastern coast of Northern Island. Not an actual island – Coney Island is itself a small peninsula served by a causeway that may at one point in history have been cut off from the land, hence the island part of the name (‘coney’ is an Irish word for ‘rabbit’ – they are everywhere around this part of Ireland) – it is less seaside resort and more a row of houses with a nice beach. In my own olden days, when times were simpler, I took to retuning the telly for a bit of home-made fun. In his time, young Ivan and his mum thought nothing of travelling for a whole day across Ulster to get to a beach with no amenities…and, as the song will leave you doubtless, it would be the highlight of Van’s formative years.

The picture that Van paints with his words is of a 1950s rural Ireland that wasn’t, I imagine, too dissimilar to life in the west of Scotland at the time, a life slow of pace and rich of culture; stopping off for Sunday papers. Jars of mussels and potted herring in case we get famished before dinner. Birdwatching. Jam jars. Taking pictures. Green fields. Rolling hills. Hedgerows and puddles and leaves blown up and along by the wind from the Irish Sea. It may be sepia-tinted but the Morrisons’ trip is crystal clear in the mind’s eye.

It’s the journey rather than the destination that has left its indelible mark on Van, as he and his mum zig-zag through towns and villages, past hills and hamlets as they make their way ever-closer to their wee seaside retreat. On and on, over the hill and the craic is good. The guitars ripple like water from a mountain stream. Wind-blown strings rise and swell to the ebb and flow of the elements. Cymbals splash, water on the rocks, harps gently descend as the journey reaches its conclusion…. and then, with a subtle, questioning inflection in his proud Ulsterian voice, the pay-off…

Wouldn’t it be great if it was like this all the time?