You don’t know this yet, but Gorillaz are the band that passed you by. Damon Albarn’s cartoon collective of rappers and rockers will turn (blink!) twenty years old this year. That’s almost as old as the cor blimey mockney Cockney band he’s still synonymous with.

Since their Clint Eastwood single made number 4 in the charts in March 2001, Gorillaz have released no less than 7 studio albums (with an 8th just around the corner) and 43 singles. Go on – name some! Then there are the trio of compilation albums, the remix album, the double figures-worth of EPs. From somewhere, from nowhere, Gorillaz have created quite the back catalogue. You should dive in. 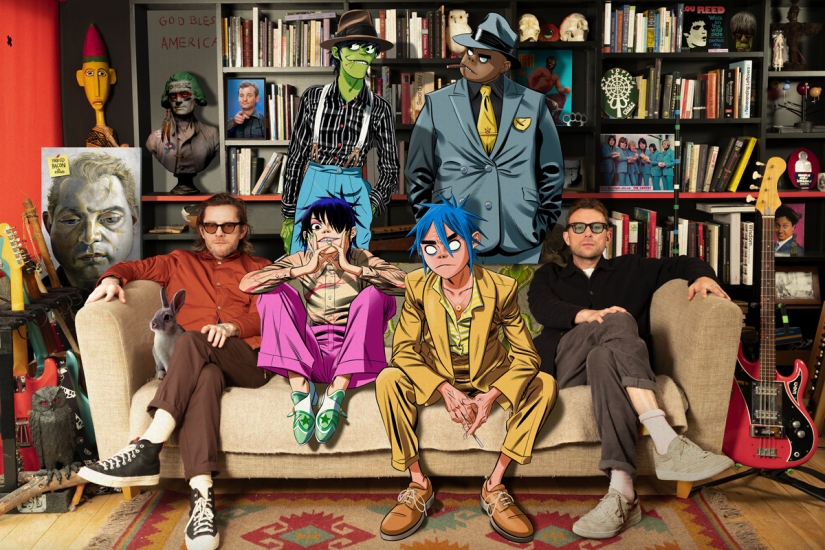 He’s clever, that Albarn. Gathering together the cream of a world far-removed from Blur and featuring them on Gorillaz records instantly takes him to a whole new audience.

From Grace Jones to Mick Jones, the list of Gorillaz collaborators reads like a who’s who of the great and groovy in music, an ever-shuffling iPod lassooed and coralled under the Gorillaz umbrella; Neneh Cherry, Terry Hall, Simonon, Snoop and De La Soul, Benson, Womack, Elton John, Mavis Staples, the list goes on…..the real Lou Reed and Dennis Hopper, Mark E Smith before he came a cropper…

…every one of them has been on a Gorillaz record. The clout of Albarn is mightily impressive.

On Gorillaz most-recent album, Song Machine Season 1: Strange Timez (‘Season‘ – tsssk!), party mode Beck rubs shoulders with a downtrodden Robert Smith, St Vincent sits side by side with Joan As Policewoman, Slowthai and Slaves battle it out in a noisy, sweary fight to be top dog… and everything is underpinned by the happy/sad signature sound of Gorillaz – sing song choruses to lift the mood after Albarn’s melancholic verses, a ripple of chiming electronic percussion here, a rumble of electronic bass there, room-shaking phat beats throughout. I’m not sure what wizardry Albarn employs to produce such glossy, shiny contemporary sounds, but whatever it is, it’s really great.

Thematically I suppose, the album runs a bit like a 6 Music show; you’re not going to like everything that’s on it, but there’s always a beat or a melody or a wonky background noise worming its way into your head and setting up camp in your cerebellum. You’re never all that far from an unexpected cracker.

The standout on Song Machine is Aries, the collaboration between Albarn, producer/rapper/drummer Georgia and Peter Hook. With her dad being half of Leftfield, rhythm is in the blood for Georgia, and once welded to the instantly recognisable sound of Peter Hook’s bass, it all makes for a fine noise.

Hook is in full-on, low slung Viking mode on Aries, his imperial, mercurial bassline slinking up and down the frets like prime time, box office New Order. The section at two and a half minutes where he plays in confident abandon could quite easily have flowed straight off the grooves of Power, Corruption and Lies or Low-Life, leather keks, Triumph Motorcycles t-shirt, beef with Barney…the lot. He even adds his spoken voice – ‘Aries!‘ to the start, much as he did in the past with those ‘You got love technique!‘ vocals on Fine Time.

Albarn knows a hook when he hears one. And who better to provide the hook than Hook himself?