…when the power of love overcomes the love of power, the world will know peace.

To be fair, Jimi Hendrix said that, and it was far too long to fit on a Frankie t-shirt in any case. It’s a neat quote though, one that easily applies to the rule makers and breakers who are hell bent on prioritising their own agendas over the good of a nation who (didn’t quite) elect them, a boys club bash, an ‘I’m all right Jack’ knees up, where the joke is very much on the ordinary people. What. A. Shower. Frankie Says Revolution!

The marketing machine that rumbled behind every Frankie Goes To Hollywood release (and t-shirt) saw to it that each of their first three singles made it to the top of the charts. Coming after The Beatles and Gerry and The Pacemakers, they were the third Merseyside act to achieve three number one singles in a row, but whereas their 60s counterparts got there via non-stop touring and ubiquitous hourly spins on Radios Luxembourg, Caroline and London, Frankie took a different route.

When sales looked like tailing off, they’d release another version; remixed and extended, strung-out and funked up across a variety of formats; 7″, 12″, picture discs, even cassette singles. The CD was just around the corner, otherwise those variations would’ve been spread across even more formats. With each subsequent new variation, the record would maintain its place at the top of the pile. 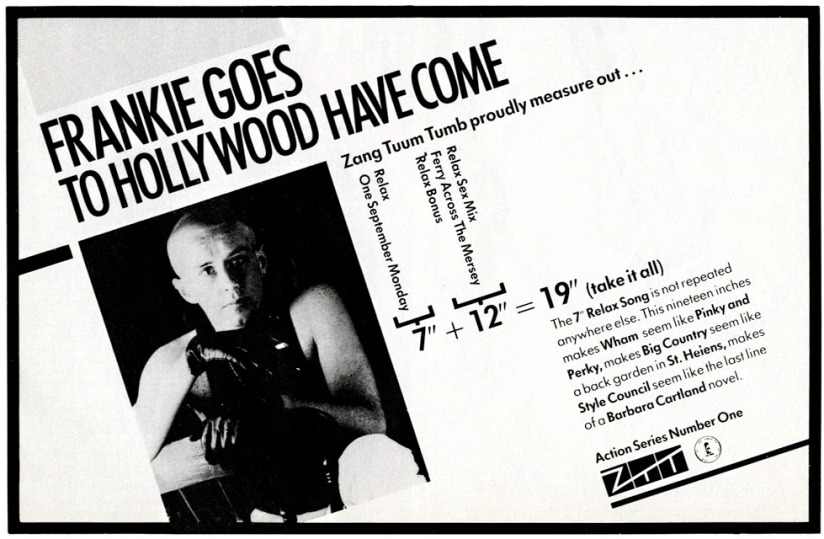 There are, believe it or not, over 30 pulsing, throbbing Hi NRG mixes of Relax! Arguably, the weekly mixes that were released to keep Relax at number 1 in 1984 weren’t actually required – as soon as it was banned by Radio 1, a goldrush of record buyers ensured it lorded over everyone for yet another week.

I should know – I was one of the millions who bought it after the ban. Frankie weren’t quite our Pistols, but they did generate similar headlines and debate.

Second single Two Tribes followed a similar path. It surfed the zeitgeist of Reagan/Gorbachev’s Cold War cat and mousing, a high octane cocktail of propaganda and paranoia – ‘the air attack warning sounds like…this is the sound.‘

A barrage of taut, tense guitars, juddering bass and superbly giddy vocals (“Hau hau hau!” went Holly) propelled it straight to number one and one and a half million sales, helped, no doubt by the provocative video showcased on The Tube where two lookalikes played the part of the two world leaders in the wrestling ring. You knew that already though. 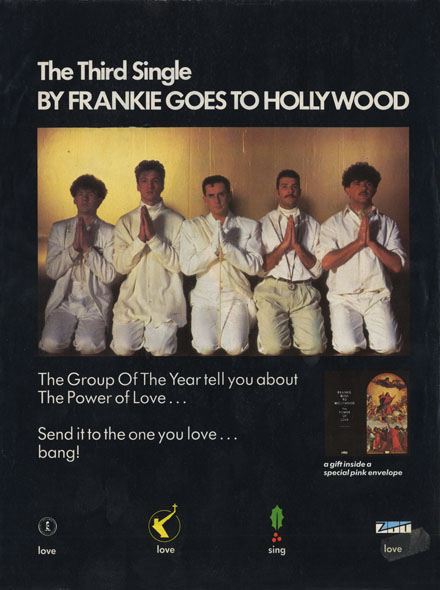 The third single was the surprise package. From a band known for grimy S&M inspired disco and anti-war political baiting, The Power Of Love was a genuine, heartfelt love song. The machinations of the ZTT marketing team – ‘The Group Of The Year‘ – ensured it was released strategically, all eyes focused on capturing the lucrative Christmas Number One slot. The Power Of Love reached the top in its first week of release at the end of November, and continued to outsell all others until Band Aid gatecrashed the party. In the event, 1994’s Christmas top three finished with Band Aid way out in front, with Wham’s Last Christmas at number two and Frankie in third spot. There’s an era-defining top 3 right there.

The Power Of Love has slowly crept up to be one of my favourite Christmas tracks. It’s not overplayed. It’s not omnipresent. It’s not short, sharp nor sugary sentimental. There’s not a sleigh bell or thumping office party beat within earshot, no Phil Spectorisms in arrangement or delivery, no ca-ca-ca-catchy chorus hooks or even a lyric that mentions the ‘C’ word. Simply, the song was accompanied by a video showing the three wise men following the star, and its message of universal peace rings true at this time of year, so a Christmas song it is.

It begins with the sound of a Radio Fab! Mike Read soundalike talking over a string-swept instrumental, speaking word for word the DJ’s outrage as he cued Frankie’s debut to be played as part of the chart rundown.

“And it at number 35….it’s Frankie Goes to Hollywood with Relax….waaay! I’ve just had a look at the cover…I think it’s obscene!…this record is absolutely obscene!…I’m not gonna play this y’know….no…thank you and goodbye!”

Then the nylon acoustic thrums its way in, the sound of the Bunnymen’s Killing Moon played by Love on mogadon. It’s all minors to majors, orchestral sweeps, gently thunderous timpanis and a skyscraping guitar line that sounds like Neil Young as produced by Trevor Horn. A great sea swell of orchestra carries us forward and the brass section – the horns of Gabriel himself – builds and climbs and climbs and builds then drops. And then, out of the blue, we have a half-witted Ronald Reagan, reading a version of the Lord’s prayer. Mad and inspired, whoever came up with that idea. And then…

…piano. That famous tinkle that starts the record you’ll know from the charts. Hooded Claws and vampires. Holly’s vocal, all reverb and echo, accompanied by Spanish guitars and understated piano. “I’m so in love with you, hurts the soul,” and the strings swell once more, carrying the song to its message. “Make love your goal.” Tension and release in just under 10 minutes, a slowly unravelling cinematic widescreen beauty.