I’ve been reacquainting myself with the excellent Beastie Boys Book. Published a year ago, I got stuck into it almost immediately and, despite its chunky, clunky, half-brick size, I had finished it well before Christmas. Set out chronologically, it tells the story of the band, from their thrash punk beginnings, to meeting Rick Rubin and their reinvention as a three piece white rap act and the brilliantly eclectic, electric albums that followed, to their sudden, unexpected end following Adam Yauch’s death from cancer. 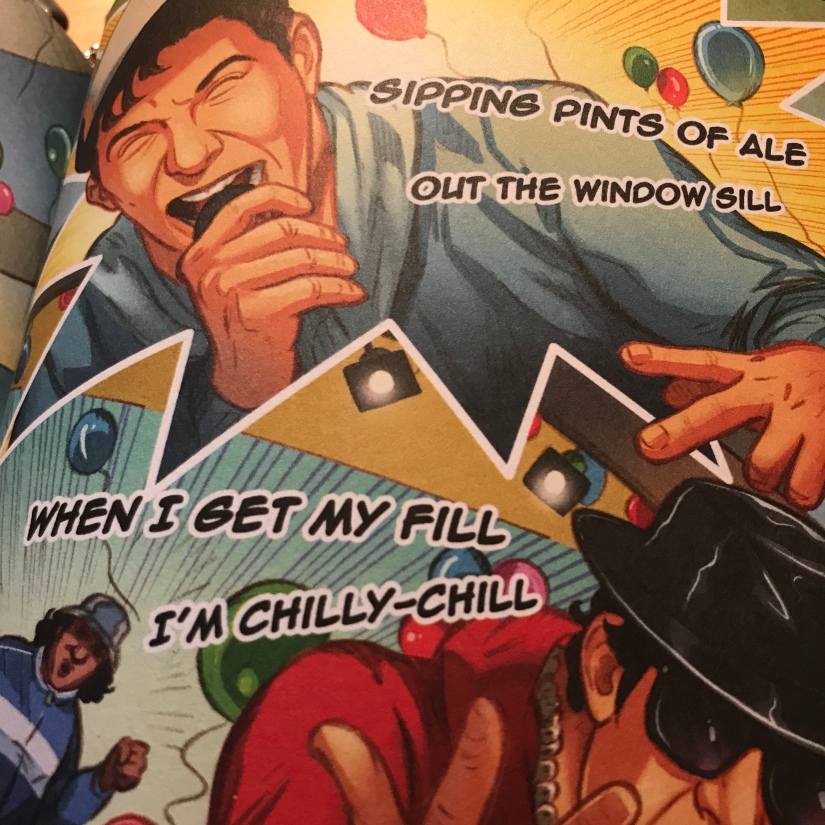 Rather like their music, it’s all-encompassing, full of unexpected turns, warm, funny and brilliantly informative; alongside lengthy and very humorous sections where Ad Rock and Mike D discuss music (their own, but frequently others’ – there are mix tape suggestions – the ‘Toyota Corolla Mixtape’, for example, that’ll have you off down an internet wormhole for a whole night or more), you’ll find superbly written chapters on such diverse subjects as Manhattan’s clubscene in the early 80s, the merits of on-tour catering, brushes with London bobbies, Charlie Chaplin impersonators, a recipe section, 70s clothes, and amongst it all, a never-ending roll-call of the great and the good in music and popular culture who cross paths with the band over the years; Mick Jones, Madonna, Perry Farrell, Lee Perry, slam dunking with Billy Corgan….it’s all in there.

It’s music though that runs through the book as liberally and majestically as the Hudson River meanders through New York State – Beastie Boys are music obsessives and they’re liable to point you in the direction of some of the best tunes you’ve never heard on every other page. Whatever the genre, they’ll happily recommend a handful of records you simply need to hear. There’s no pigeonholing with the Beasties – a record’s either good or it isn’t. Check the list below and tell me there aren’t at least a dozen tracks you haven’t heard. And tell me again tomorrow if it hasn’t sent you off on an enlightening mission to wherever it is you find your music. And tell me the day after if you haven’t found your ‘new jam’, or whatever it is folk say nowadays. 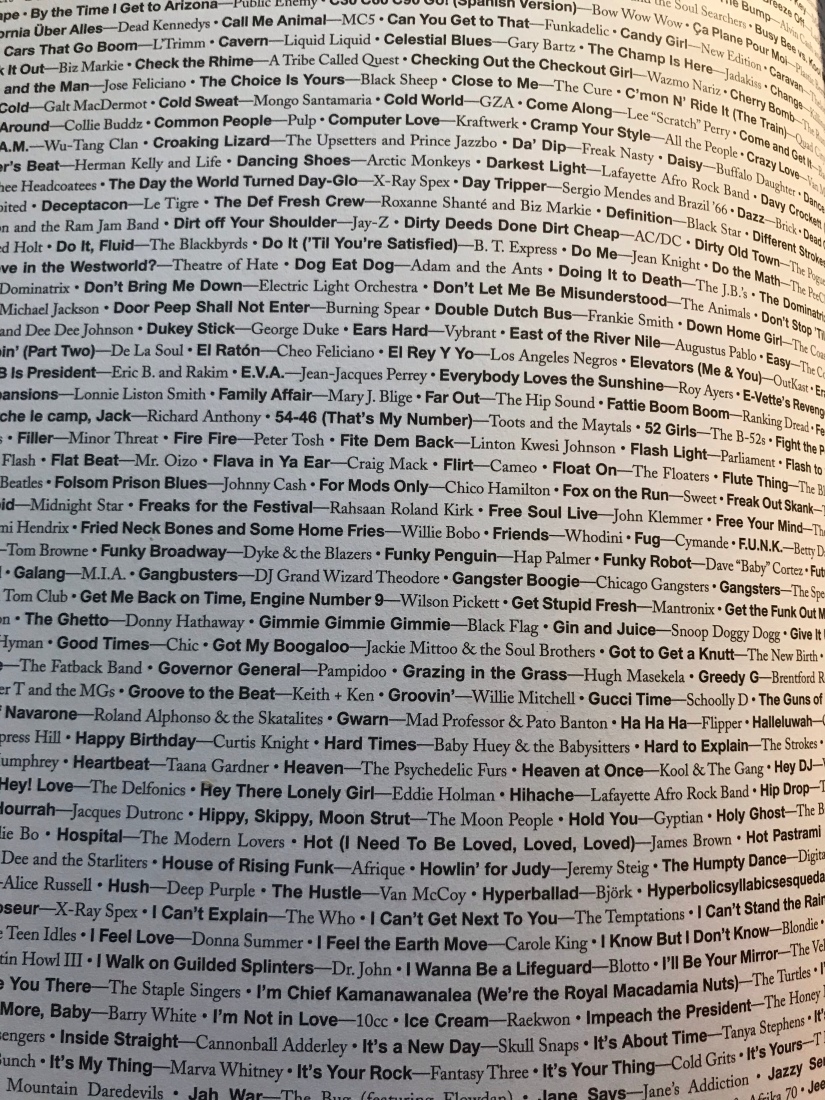 I signed up for one of those free 3 months trials of Audible – which I’m now paying for a year down the line and haven’t quite got round to cancelling – purely to hear the book in all its Brooklyn’d drawl, but never actually got round to listening to it until recently.

The audio version is the book in 3D. It’s fantastic.

The words fly off the page, often delivered in the same gobby sneer as the guys who made the records but always delivered with honesty and candour. It pours a whole new light on what was already an impressive book and for the past few weeks, it’s been sound-tracking the commute from work at the end of the day, with each spoken chapter just about the perfect length for the drive home; 12 hours and 42 seconds of total listening time that knocks the Shaun Keaveney 6 Music Show for six.

The two remaining Beasties read their own chapters just as if they were setting the record straight whilst sitting with you in the car. Occasionally, just as would happen in real life, the other will interject from the back seat to counter a ‘fact’ or set the record straight. It makes for a highly entertaining and very funny journey. There’s a clear warmth and love for one another. Adam Yauch is held in very high esteem as ‘Chief Beastie’, the one the others looked to for guidance and advice, the multi-talented quiet guy who could turn his hand to anything; creating tape loops in a pre-digital age, being the factor in his apartment block, booking Tibetan monks to open Lollapalooza, jumping out of planes to snowboard down mountainsides, and so on. The odd guest reader takes over duties now and again. I don’t have a good enough frame of American culture reference to appreciate some of the orators, but amongst the basketball players (?) actors (?) film makers (?) the occasional A-Lister appears behind the mic; Snoop Dogg. Chuck D, Kim Gordon. Spike Jonze. It makes for a varied and interesting listen.

None other than Elvis Costello reads a few chapters towards the end. It’s funny to hear him say very Beasties phrases such as, “they were so pissed at us,” and, “I mean, fuuu-uuck!” in his languid, natural voice, with none of the pent-up energy that you know so well from his records. Thrillingly, Jarvis Cocker pops up quite unexpectedly to read the chapter on the Beasties’ visit to London, when they visited Mick Jones and John “It’s Johnny fucking Rotten!” Lydon happened to pop round for a visit in the middle of it all. 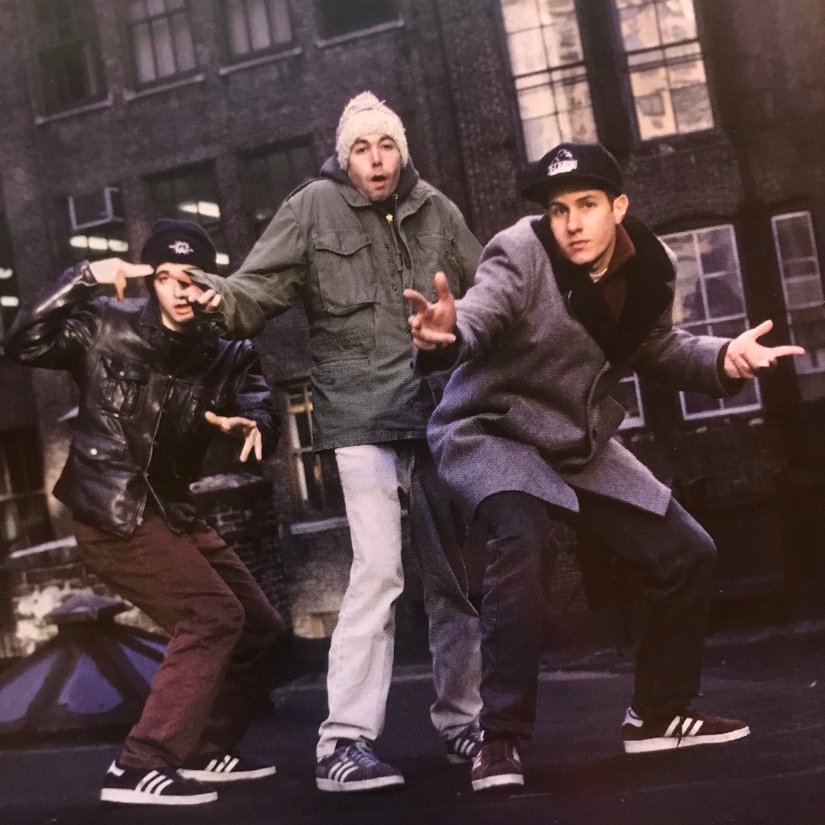 Naturally, both versions of the book have led me back to the Beastie Boys’ own music and I’ve discovered a proper love for Hot Sauce Committee Part 2 (there’s no Part 1, as you’ll discover if you read/hear the book), the group’s last album and one which, unlike the holy trinity of Paul’s Boutique, Check Your Head and Ill Communication, I rarely played until the book nudged me towards a gentle reappraisal. As it turns out, it has all the essential Beastie hallmarks on it; phat beats and phatter bass, clever wordplay, fantastic playing and obscure samples. Or so you’d think.

Recording the album, Beastie Boys set out to play the greatest in-joke they possibly could. They deliberately set out to create an album that was full of fake samples, a record collector’s unattainable nightmare designed to mess with the minds of every crate digger who ever sought out an obscure break. They wanted you to think it was built around samples, but rather than the band lift a break from an obscure 70s record, they themselves went to incredible lengths by writing and playing the break then filtering it through studio trickery before building whole tracks around what appeared to be a sample. They went so far as to create fake writing and publishing credits in the sleevenotes. They even wrote a whole song – Long Burn The Fire – based around their own fake sample and included it in the middle of the record, “a totally backward way of sampling, an experiment in experimenting.”

The big tracks on it stand with the very best of the Beasties; coming across like the long-lost half-cousin of Hello Nasty‘s Intergalactic, Make Some Noise, with its vocodered vocals and wasp-in-a-jar synth line is the brilliant show closer that the band never got to do in concert.

Too Many Rappers was built around one of Yauch’s drum loops. A terrible, sloppy drummer by all accounts, Yauch persevered until he had nailed the perfect section that could be chopped, looped and turned into a Zeppelinesque backbeat upon which the trio plus guest vocalist Nas could wind and weave their vocals.

Best of all is Don’t Play No Game That I Can’t Win, a fantastically dubby reggae track that introduces itself like The Orb’s Perpetual Dawn before taking a turn uptown with a guest vocal from Santigold.

Coasting along on a fluid groove of kangarooing up-the-frets bass married to pistol crack snares, room-rattling rim shots and hissing hi hats, it spotlights just how great the Beastie Boys were as musicians. Santigold floats across the top while the three Beasties jump in and out in the way they do, every last word in each line emphasised for effect by having the trio shout it OUT!, a technique stolen from Run DMC and still being employed to great effect on their final album.

20 bonus points are on their way to the first person to spot the Dylan lyric appropriation, one of at least two on the album.