Temptation by New Order is a steam-powered, clattering industrial racket, the result of maverick programming and experimentation from a band keen to break free from their previous sound and take on a brave new direction.

Coming a year after a debut album that the band struggled to like – Bernard Sumner in particular hated its unavoidable debt to Joy Division, Temptation plugged the gap between the propulsive Everything’s Gone Green and the ubiquitous Blue Monday. Like all the great bands, New Order were (are?) great at releasing stand-alone singles; bold statements of intent and hints to future direction, and made sure Temptation was seen as such. It’s the perfect marker, taking the cold, robotic greyisms of the Movement album and dressing them up in learn-as-you-go proto sequencers and asthmatic guitars that wheeze and rattle away like Nile Rodgers had he lived in a Whalley Range bedsit.

Incredibly, the two versions that make up the 7″ and 12″ releases were recorded in one 15 minute take. On the longer version, the band crash in as if they’ve really hit the ground running, a multi-layered palette of pulsing sequencers, Peter Hook’s signature bass-as-lead and those ‘woo-oo-oo-ah-oo‘ vocals, a notion which only makes sense once you know that the 7″ edit fades at the same point the 12″ begins. Of the session, the first 5 or so minutes were given over to the 7″ version, the track that would secure enough radio play to get New Order inside the top 30, and the rest (just shy of 9 minutes) was where the band allowed themselves to fly. Cue both tracks up and see for yourself;

The 12″ version is notable for the wee yelp that Barney lets out just off-mike as the track limbers its way into its free-form groove, the result of a snowball being shoved down the back of his shirt by an errant band mate as he prepares to sing and drive his band forward from the constraints of the past into a technology-inspired future. As the snowball works its way down Barney’s back he mixes up a few of those ‘green eyes, blue eyes, grey eyes‘ lines but recovers in time before anyone save the most trainspottery of listeners has noticed. I first picked up on that wee slip way back when while trying to unbend the corner of the beautiful Peter Saville-designed sleeve, bashed and bent from being hidden in my school bag to avoid the disapproving eyes of my mum who lectured me regularly on the evils of spending all my paper round money on records. 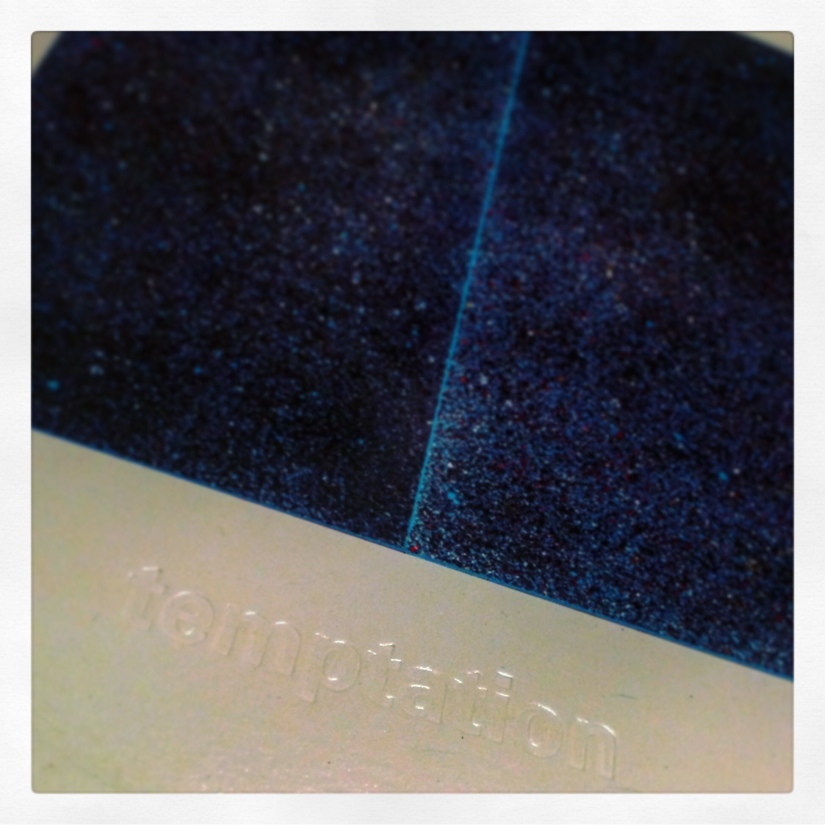 Temptation is a track New Order hold dear. Not only does it have the honour of being their most-played live track, the band would go on to re-record it on at least two further occassions. The most popular version of Temptation is arguably the one that graces Substance, the collection famously commisioned by Tony Wilson as he wanted all the New Order singles in the one place for listening to in his car.

Not remixed from the original, but recorded as a brand new track 5 years after the original, it’s a big, bold, pop record, sunshine-bright with a spring in its step and as far removed from the original as Salford is from the Seychelles. Does it lack something because of this? Soul, perhaps? Or the mis-placed wonky, seat of the pants programmed percussion? Maybe, but the Substance version of Temptation is the glossy sound of a band finally free from its monochrome past and confident in its own skin. They’d record the evergreen True Faith around this time, the melancholy-drenched beauty that went a long way to cementing New Order’s status as one of our greatest bands. Temptation though….give in to it. It’s a cracker.

6 thoughts on “The Temptations”