In football parlance, a passenger is someone who, for one reason or other, isn’t giving their all for the team. “See that Jones? Nothing but a passenger the day. He’d be better aff oan the bench so he would.” The way a bus carries its passengers to their destination, so a passenger’s 10 team mates will carry him through the game’s 90 minutes. A passenger is a shirker, half-arsed and unprepared to put in the hard graft to help the others shine. No one likes a passenger.

In the early 90s, U2 were spearheading a post-modern zeitgeist. Their most recent albums, Achtung Baby and Zooropa had been toured globally featuring all manner of interactive stuff – TV channels flickering through the static behind the drums, phone calls to world leaders live on stage, stage sets featuring eastern European cars, giant lemons and papier mache versions of the band that were even better than the real thing…. the sort of stuff that in more recent times acts such as Coldplay and Arcade Fire have developed for their own means and which is now the standard in arena-sized rock shows. The Glasgow Zoo TV confession box was a particular highlight, with one devious wee guy announcing to 50,000 of us that there was a party following the show at his pal’s flat in Shawlands. He gave out the address too. Anyway…

Those two albums. Eno worked his magic on them, weaving an underbelly of atmosphere, ambience, and abstract artiness that allowed the tunes to shine with just the right level of weirdy wonkiness. Effectively, he rescued U2 from disappearing up their own cowboy-hatted backsides, dragging them back from mass-market mid America to rebrand them as cool European soundscapers. While Achtung Baby is undoubtedly the better of the two albums, Zooropa has its merits. Not so much the ‘follow up’, the never-quite admitted to third in the trilogy, Passengers Volume 1 album.

Just like those half-arsed footballers, the Passengers album was let down by tunes bereft of ideas and suffered from being an exercise in indulgent steps too far. Following a shelved plan to record music for a low-key film by director Peter Greenaway, the concept was for U2 to write the themes for a dozen or so imaginary films – United Colours Of Plutonium, Ghost In The Shell, Always Forever Now, and so on – and to use the exercise as a way of expanding the work they’d been doing with Brian Eno. Nowt wrong with that of course, but the results proved to be less than essential listening. Indeed, such was Island Records bewilderment with the finished result, they suggested U2 released it under an assumed name. If the record company didn’t ‘get it’, it stood to reason the record-buying public, those same millions who’d bought the band’s last 2 albums, would also struggle with the music therein. The album was released with muted fanfare to general indifference and has since found its rightful place on the margins of the U2 catalogue.

One track on the album stood out as a stone-cold classic.

It’s beautiful. Stupid and meaningless, but in the middle of an album hell-bent on self-indulgence and abstract expression, it hits you between the eyes like The Ramones gatecrashing the 70s. And just when it can’t be any better, the Edge greases his guitar upwards, Craig Armstrong’s string arrangement swells fit to burst and none other than Pavarotti pops up, bathed in pathos and regret and sounding like gentle thunder. Ah, you think, Bono’s voice was deliberately quiet so that when Luciano arrived on the scene you’d sit up and take notice. Clever that, both the production and the surprise of hearing Pavarotti blow Bono’s voice into the abyss with little more than a gentle sneeze. Incredible stuff.

If Miss Sarajevo were to soundtrack a film, it’d be for the slo-mo shoot-out scene in a Scorcese restaurant, where most of the main protagonists and a couple of unfortunate waiters meet their untimely and very bloody end as Pavarotti’s tremulous tenor washes over them. Think of this as you listen. It makes perfect sense. 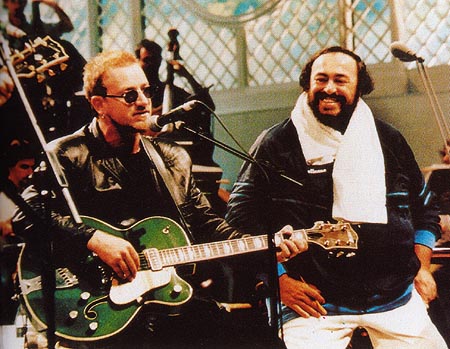 Not surprisingly, U2 aren’t blind to the beauty of Miss Sarajevo, featuring it at least twice on subsequent Best Ofs, proving I suppose that a good track is a good track, no matter how it first makes itself known. “There’s a thin line between interesting music and self-indulgence,” pointed out an insightful Larry Mullen a decade on from Passengers’ uneasy release. So said the drummer who didn’t get to play on the one stand-out track.