Brendan O’Hare is best-known as being one of the three drummers who’ve wielded the sticks and pounded the beat in Teenage Fanclub. Between 1989 and 1994, Brendan’s tight but loose scattergunning Moonisms helped define the early Teenage Fanclub sound; loud, melodic and always just half a beat from falling apart. Fanclub shows at the time were a riot of hair and feedback, false starts and between-song random gibberish. I first caught them live when they supported the Soup Dragons at the old Mayfair in Glasgow in July 1990, a mind-melting 28 years ago. That night they were all the things above and more and I was so taken with them I went out the next day and tracked down a copy of Everything Flows, their recently-released debut 7″.

In the subsequent quarter century and more, I’ve been first in the queue whenever there’s a new TFC release and I can count on the one hand how many times I’ve missed a hometown Fanclub show, mainly pre-internet and back in the day when you really had to have an ear to the ground.

I was fairly miffed, let me tell you, to find out one day that Teenage Fanclub and Alex Chilton had set up at the 13th Note the night before for a wee show.

Likewise when a work colleague told me he thought he’d have seen me “last night at the Fannies’ show in the Mitchell Library. They played loads of Beach Boys tunes and stuff.”

Or the night when I was mid-way through the Thursday wheezefest that was 5-a-sides and someone asked why I wasn’t at the Edwyn Collins with Teenage Fanclub gig in Mono that was happening right there and then. There was a lot of Falling, but not much Laughing, let me tell you. That was at the height of the TFC message board too. How I missed that, I’ll never know.

Other than that, I think I’ve been at them all, from King Tuts in Elvis costumes to the Pixies support where the stage collapsed after their set and the show was abandoned, to the rootin’ tootin’ Grand Ole Opry – perhaps the finest show I’ve seen them play, the 3 nights at Oran Mor where they aired much of their stellar back catalogue, the umpteen ABC and Barrowlands shows and everything in-between and since.

I used to be dead proud of my unblemished record of having seen the band perform live at least once a year, until Norman’s relocation to Canada and the inevitable gaps in the touring schedule that came as a result.  Having said that, I reckon I must’ve seen TFC over 50 times. They’re second only to the mighty Trashcan Sinatras on the old gigometer, and in November I’ll be creeping ever closer to the TCS by adding another 3 notches to that mighty fine tally mark. 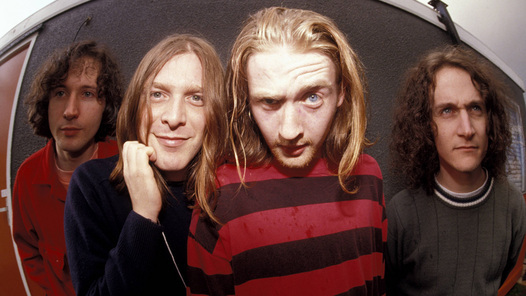 Anyway, back to Brendan.

Brendan joined Teenage Fanclub when they formed from the dead ends of The Boy Hairdressers, a band that featured the songwriting talents of Norman Blake and Raymond McGinley. With the addition of Gerry Love on bass, the 4-piece went quickly to the recording studio armed with a handful of Boy Hairdressers’ songs and a headful of giddy ideas. A Catholic Education was the result; an album that provided a decent introduction to Teenage Fanclub. There were noisy tracks – Heavy Metal, irreverant tracks – Everybody’s Fool, loose approximations of melody, fighting for top billing with the surface noise and coming off second best – Too Involved, Every Picture I Paint, Critical Mass and one bona fide meandering classic, that debut single Everything Flows. 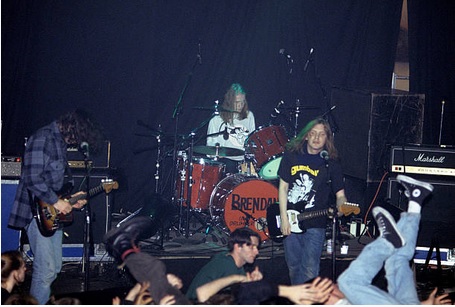 On the album, Brendan shared drumming duties with former/future drummer Francis MacDonald but by the next single, the magnificent noise pop of God Knows It’s True, Brendan had made that shoogly drumming stool his own. Just as a wee dog feels the need to pee up a tree trunk to mark his spot, he even stuck his name on the bass drum where most normal bands displayed their logo. Teenage Fanclub are no normal band though. When second album proper Bandwagonesque appeared, three of the principal members were writing material.

Released 16 months or so after A Catholic Education, Bandwagonesque was a few short months away from, yet light years ahead of, the debut. The harmonies that would soon come to define the band were pushed to the fore. String sections and brass parts helped drag it above and beyond the scuzzy indie rock of its contemporaries. Guitars still fizzed and the drums still hammered like a blacksmith on an anvil, but Bandwagonesque was radio-friendly power-pop in excelsius, finishing the year at the very top of the ‘Best Of The Year’ lists ahead of such also-rans as Nirvana’s Nevermind and REM’s Out Of Time. You knew that already though. 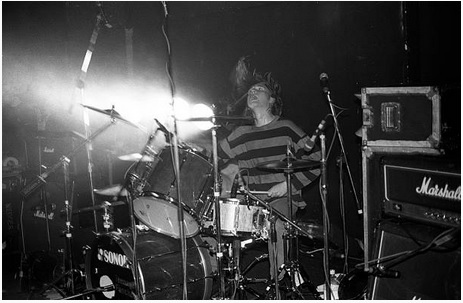 Brendan played on the follow-up, Thirteen, the misunderstood forgotten child of the Fanclub family. By the band’s own admission they went to the studio with half-finished choruses and ideas rather than fully developed songs. Not that you’d know if you listened to it. It lacks a bit of Bandwagonesque‘s sparkling punch and Grand Prix, the album that followed, knocks it for six, but as a standalone album, Thirteen is still miles ahead of most other band’s best work. Any album that contains the swooning Norman 3 or the frantic knee-trembling Radio or the Neil Young-isms of closing track Gene Clark is hardly in the ‘duffer’ category. Following the Thirteen tour, Brendan left the Fanclub due to ubiquitous ‘musical differences’ and was replaced by former Soup Dragon and fellow North Lanarkshire guitar band alumni Paul Quinn.

Brendan would join TFC briefly later on; on the 2006 tour when the band played Bandwagonesque in its entirety for the first time, it was Brendan who was brought in on drums. And at those Oran Mor shows a couple of years later, Brendan nearly knocked me over in his haste to get to the stage to join the band for an impromptu – although how impromptu I’m not exactly sure – run-through of The Ballad Of John & Yoko. I suspect he may also have more than a bit-part to play in the Catholic Education/Thirteen shows later on in the year……

With Teenage Fanclub’s back catalogue due for imminent release and subsequent reappraisal I thought it might be quite good to ask Brendan if he’d like to ‘Sophie’s Choice’ the Teenage Fanclub back catalogue and narrow it down to an impossible 6 of the best. His reply was immediate and positive.

And so, over the course of a week or so, Brendan whittled an outlandish task down to a definitive half-dozen. Fanclub freaks might be a bit surprised…

I’m kinda uniquely placed to try and talk my way through this but I’ve not written more than 100 words since I left school. In the 17th century.

I’m mad for the intricacies of the songwriting process. What better way then for me to spend some time than by trying to write about one of my very favourite bands and six of their songs?!

I’ll use letters instead of numbers because there’s no hierarchy to this list.

Some songs are perfectly recorded, the band so synchronised that the subsequent overdubs all nestle into the song like the band played it all live.

I’ve no idea how this was recorded but it feels like you’re hung in a hammock, floating within the song, within the mix. Norman leads us, pied piper-esque, towards the most beautiful big set of pastoral doors, kicking them in to reveal the most uplifting synth solo since ever.

I rarely find myself imagining driving to a song but this song IS driving in Scotland. It really just is.

Raymond has a tendency to hide around musical corners and dazzle you as you pass by. I guess I’m saying he’s like a musical flasher, managing to make even the most sensible of timings unusual and quirky. (I’m not sure how the flasher analogy is working on that point.)

This song is so controlled yet so chaotic. The guitar tones allow you to hang on to their arms, either side, whilst the frankly incredible bass playing (and bass sound) plays keepie uppie with your arse. With false ‘Highway to Hell’ moments to boot this one just makes me want to bounce about, happy being a marionette controlled by the maestro’s fingers.

Take the Long Way Round

A beautiful Gerry introduction to his world at the beginning of this song. A hypnotic psychedelic twister of a “previously on Gerard Love” recap allowing you to settle in for the trip.

Jangle sunshine pop like it really should be done. I’m not sure that anyone else’s world is quite like Gerry’s. This sounds like a band having some fucking fun. Why wouldn’t you be? I mean you got Gerry singing about some wistful sunshine hippy shit (I’d imagine), slapping you with a cracker of an indie-jangle chorus.

Wooohoo! Sunshine Lanarkshire-styles. 70’s summer skies break into an impromptu acapella in a bus shelter. Harking back to a time when cigarettes didn’t kill you and you’d almost completed your Panini World Cup sticker book.

For me, it’s a holy trinity within one of the greatest albums of all time.

I’m not sure how long this song is. I always play it twice. It somehow manages to fuse a sombre, plodding nature with an upper layer of melodic loose-o-tronic guitar work.

By my calculations this song is either useless or suicidal if used in conjunction with jogging apparatus. As an example of harmony singing, however, it’s second to none.

There’s something really Euro-Glam about this to me. Metronomic insistence allowing for the usual beautiful Fanclub harmonies to float just above the song enabling a trance-like state to occur wherein journeys, and their afterglow, are explained to you. And you understand. Perhaps only briefly.

I know!!! ALL from Songs From Northern Britain. I really do think it’s one of the greatest albums of all time. Sublime.

For when you need a bit more Gerry sunshine in your life. Bubblegum pop done with the style, fashion and execution of true masters. The chime of the guitar break. The under-shimmer of the Hammond. Holy Tits, Batman, there’s not many musical buttons it doesn’t flatter with its pushing. The apparent effortlessness of the performances on this song are what make it so special for me.

Wow! Who’s going to argue with that? Former drummer picks 6 tracks, none of which he plays on, 5 of which are on the same album. 1 x Norman, 2 x Raymond, 3 x Gerry. It’s a great list. Feel free to add your own chosen 6 in a comment below.

You should probably visit/revisit Gerry‘s Six Of The Best from 7 years ago. You’ll find that wee beauty here.