The Beastie Boys might have portrayed themselves as three street-smart, sharp-witted goofballs with expensive tastes in trainers and sports-casual wear, but anyone with half an inkling knows they were much more than that. Behind the facade was a ruthless business empire including a record label, a magazine and their own clothing line, all of which were as undeniably hip as their Brooklyn-based beats. Working alongside the trio (but forever just out of shot) was a handful of trusted associates, pulling the strings, wheeling and dealing, making sure the well-oiled Beastie machine crept forever forwards. Alongside the film makers who captured their good sides on celluloid and the payrolled sneaker pimps who forever kept them in box-fresh trainers were a core of musicians and producers who could be relied upon to enhance the Beastie’s sound in the studio and on the stage. One such entrusted friend was Money Mark. 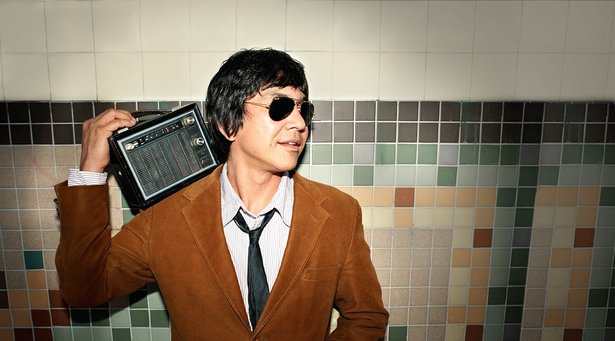 Money Mark was born Mark Ramos Nishita in Detroit to a Japanese-Hawaiian father and Chicano mother. The sounds he continues to coax from his assorted vintage keyboards are as exotic and interesting as his background suggests. He came to the Beastie Boys via producer Mario Caldato Jnr. when the producer asked him if he was able to fix the fence at the studio where the Beastie Boys were recording Paul’s Boutique. Mark was quick to point out that not only could he build fences, he could build recording studios too and, after duly building the Beastie Boys their dream studio, he began helping out with the recordings that followed.

Between 1992 and 2011, Money Mark collaborated on every Beasties’ release. Considered wisdom suggests that Paul’s Boutique is the highest of high points in a flawless discography, but when pushed, I’ll always choose Check Your Head. In no small way that’s due to Money Mark’s Fender Rhodes being allowed to roam all over its 20 tracks without a leash. It’s Mark that drives Sure Shot on Ill Communication, his rudimentary beat box vying for space with the understated keys, trying to reign it all in while the Beasties’ signature Panzer attack vocals spit and snarl from start to finish. It’s Mark who triggers the siren assault on mega-hit Intergalactic, and that’s him again, holding the groove behind the multitude of samples on Triple Trouble from the post 9/11 To The 5 Boroughs. You might not realise it, but Money Mark probably plays on at least 4 out of your top 5 Beastie Boys tracks.

As well as being the Ian Stewart of the Beastie Boys, responsible for much of the general funkiness but stuck stage right, half-hidden behind a bank of speakers, Money Mark makes music in his own name. Push The Button, his second album is a melting pot of stoner grooves, clattering hip hop and gorgeous Fender Rhodes piano. Released in 1998 (shit – that’s 20 years ago!) it’s worth discovering if you’ve never heard it. And if you have, it’s worth a revisit. I bet it’s been a while.

The lead single Hand In Your Head is a mid-paced shuffler that takes its lead from Sly Stone circa There’s A Riot Goin’ On.

Money Mark – Hand In Your Head

Bass on this track is played by Sean Lennon, himself signed to Grand Royal, the Beasties’ label and drums are provide by Russell Simins, another who’s no stranger to a Beastie Boys record. In short, this has all the ingredients of a prime-era Beasties’ track without the gobby, snotty icing on the cake. And while you might enjoy that gobby, snotty icing, you can’t deny the simple mellowness of it all.

The b-side, if CD singles have b-sides, is just as good. Old track Cry is given a Dust Brothers remake, keeping the original’s downbeat groove and descending bassline – sampled from Quincy Jones’ version of Summer In The City, I think.

The scratching and stu-stu-stuttering horn samples are very of their time, but the vocals! Man, it’s Sly all over again. Actually, it’s probably more Shuggie Otis. By the time the keyboard solo meanders in, you could be forgiven for thinking you’d regressed to some Hispanic neighborhood in uptown New York in the summer of 1973, fire hydrants gushing their escaping load out and across the stoops of the brownstones as kids play in slo-mo inside it.

Mark wasn’t always kept in the Beastie Boys’ shadows. At a memorable Barrowlands show during the Ill Communication tour, he waited until the encore – So Whatcha Want if I remember correctly, before launching himself over his bank of keyboards and out into the first couple of rows. He reapeared a minute or so later, trainerless but smiling, helped back onto the stage by MCA and a wee baldy G4 security guy who never even noticed him flying over his head in the first place.

2 thoughts on “Shake Your Money Maker”