So the Stones are Rolling out another world tour, a global corporation charging eye watering prices for the privilege of seeing them up close and personal.

The more affluent of ticket buyers, lucky them, might have the honour of watching the band from the same postcode as the stage.

The really affluent will populate some sort of Golden Circle where, for the price of a scabby semi in Saltcoats they’ll get to press the wrinkled flesh of some of our greatest rock stars after they’ve wheezed themselves off the stage.

The rest of the ticket-buying public will need to watch from afar, rockin’ their socks in the knowledge that they’ve ‘seen’ the Stones, albeit from one of the massive Jumbotrons that’ll be scattered a couple of kilometres either side of the stage. I Can’t Get No Satisfaction indeed.

This picture was doing the rounds amongst friends on social media over the weekend.

That’s just ridiculous. Look at the booking fee alone. It’s obscene. For that kinda money I’d be expecting a shot of Keith’s guitar. Maybe even an invitation to pop up on stage and crank out the riff to Start Me Up on his trusty old 5-string Tele. Perhaps even get to count jumpin’ Jagger in for the opening line. But to stand in the middle (if you’re lucky) of a rugby stadium with thousands of other light of pocket Stones fans, that’s just not on. It’s a real-life beggar’s banquet. Baby, you’re a fool to buy. Don’t do it, you’ll only encourage them. 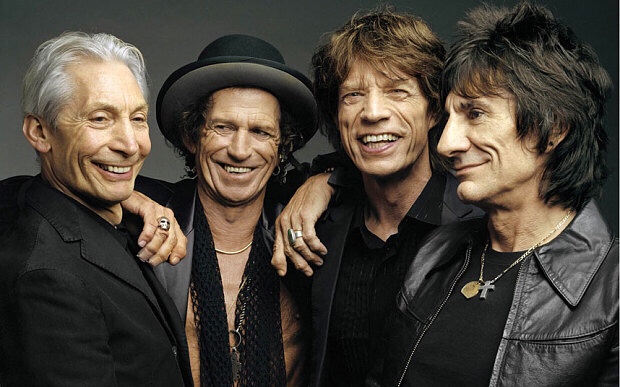 It’s a tricky one though, isn’t it? The Stones are a proper, genuine heritage act, one of those bucket list acts that you need to tick off before it’s too late. We’ve lost Bowie and Prince in recent years, yet Keef, the riff that keeps on riffin’, keeps keepin’ on.

In 1990, my pal and I went to see them on the Urban Jungle tour at Hampden, “before (ho ho) it’s too late“. They were great ‘n all, romping their way through a set kissed with the greatest of Rolled Gold; Start Me Up, Satisfaction, Gimme Shelter, Tumbling Dice, Sympathy For The Devil. Everything you wanted to hear, in other words. If you’d told me though that the band would still have been a going concern 28 years later, I’d have laughed in your face.

I’d have given anything to have seen the Stones in their swaggering, shaggering prime. But on the Stones timeline of greatness I was barely out of nappies when they were in their pomp and at their peak. The first chance I had to see the Stones was in 1990. In 1990, 1972 and Exile On Main Street was less than 20 years prior. Yet at the time it was a whole other lifetime ago. “Oh, it must’ve been great to have seen the Stones 20 years ago“, we slevvered obliviously. I remember at the Stone Roses Alexandra Palace show in 1989, dancing giddily before the band came on to Sympathy For The Devil, the whole place doing the ‘whoo-whoos’ in some mass communion. “The old songs are the best!” we agreed, the way a late teen might rave these days about Loaded or Cigarettes & Alcohol. In comparison, I think I really did see the Stones in (almost) their first flush of youth.

When did gig tickets become so expensive? The Stones’ 1990 Hampden show was £20 (including vat, as you can see). My ticket was bought in person from the old Virgin Megastore on Union Street, and I’m pretty sure I wasn’t conned into paying any sort of booking/admin/licence-to-print-free-money fee. By comparison, that Stone Roses show at Alexandra Palace was just £8.50. U2 on the Joshua Tree tour a couple of years before was a part-time job killing £10. So £20 would’ve been a dear ticket in 1990, but in the scheme of things, not that expensive.

The argument’s there about touring being the only reliable source of income for bands these days but the Stones are taking the piss. Or are they? If the shows sell out, which they probably already are, are they pricing based on supply and demand? Or are they being greedy?

At some point down the line the No Filter tour will be celebrated as the highest grossing tour ever, outdoing yer U2s and yer Police and yer last Rolling Stones tour….It doesn’t make it right though.

The Rolling Stones – You Got The Silver